Known as the ‘World’s Greatest Steeplechase’, the Grand National is watched by hundreds of millions of people around the world. Though it isn’t the most respected jump race by those within the horse racing industry, with that honour going to the Cheltenham Gold Cup, it is the race that even people that don’t like horse racing will tune in to see. The difficulty of the fences means that no one is ever too sure which horse is going to win, meaning that more than a few rank outsiders with long odds have done so in the past.

It is a race for the most special of horses, cementing their place in the history books with a win. Horses don’t tend to win it more than once, which is why names like Red Rum and Tiger Roll have gone down in history. The Aintree Racecourse crowd appreciates a good runner when it sees one, but what do the connections of the winning horse get in addition to the adoration of the crowd? How much does the winner of the race get? What does it look like for the winning trainer and the victorious jockey? These are all questions we’ll look to answer here.

How Much Is Available Overall?

The first thing that is important to point out is that the Grand National’s prize money is changing all the time. We’ll look to explain how it has changed over the years elsewhere in this piece, but it is crucial to acknowledge that it is forever changing because you might read this after it has been altered once again. One of the world’s richest races in terms of prize money, though nowhere near the level of the likes of the Saudi Cup, the Pegasus World Cup or the Everest, the Grand National offers £1 million prize money in total.

The prize fund for the race is mostly possible thanks to the sponsors that it has enjoyed over the years, with the likes of Seagram Distillers, Martell and Crabbie’s being involved at one point or another. Randox Health took over the responsibility in 2017 and currently has a contract that runs up until 2025. Though there has been some controversy over the company’s sponsorship of what is often thought of as ‘the people’s race’, there can be no doubt that its involvement has allowed the race to offer more and more prize money.

How Much Goes to Each Place?

You can see that there is a significant different in prize money between first and second, let alone between the winner and the horse that finishes tenth. Indeed, the winning horse gets more than 500 times what the tenth placed horse is awarded, which is why every place makes a difference. If the horse finishes outside the top ten, there is no prize money offered to it and its connections, meaning that taking part will have cost them without any recompense.

Though only 25% of the horses that begin the race get any sort of prize money, presuming there are the maximum 40 horses taking part, it might seem like a measly amount. In reality, the Grand National sees prize money awarded to more horses than virtually any other race in the calendar. You can imagine just how painful it is for an owner to see their horse miss out on winning the race by a nose, which happened to Sunnyhillboy in 2012, given that it means a drop of more than £350,000 in prize money.

How Much Do the Jockeys Get?

Though it would understandable for you to think that the jockeys would ride in a prestigious race like the Grand National for free, the reality is that they get a fee for taking part in the race. At the time of writing, that stands at £169.85 for National Hunt events, which isn’t bad for a day’s pay but isn’t great either. It is common for jockeys to have arrangements with owners or trainers to ride for them, such as when AP McCoy earned around £1 million a year to be the regular rider for JP McManus prior to his retirement.

More importantly, jockeys tend to have agreements in place with owners to earn a given percentage of any prize money that they win. An average figure is around 3.5% for jockeys that manage a place, up to 9% for those that win the race. That means that the jockey that finishes tenth would expect to receive an additional £40, which pales in comparison to the £50,517 that the winning jockey will get in his pay-packet. Of course, there are other considerations that jockeys have to think about with any prize money.

The Jockey’s Agent Will Take a Cut

Virtually every jockey will have an agent, the person who is responsible for getting them their rides. Usually an agent will earn 10% of what a jockey earns, which could be as much as £1,000 for a full day of rides even before prize money. Jockeys also need to pay 3% to the Professional Jockeys Association, in addition to a percentage that goes to their valet. Only the agent gets a percentage of any prize money, with the others getting a cut of the rider’s fees. Even so, it means that a £50,517 Grand National win drops to around £46000 immediately.

Of course, winning the Grand National comes with its own cachet. Jockeys are able to take on sponsors, with the name or logo of a company appearing on the clothes that they were, for example. A Grand National winning jockey is able to earn a lot more than other riders, purely on the back of winning the race. On top of that, they can earn money doing talks and appearances that they probably wouldn’t have been able to do unless they’d also won a race, such as the King George or the Cheltenham Gold Cup.

How Much Do the Connections Get?

The jockey is, for obvious reasons, the most visible person involved in a horse race. Yet there are plenty of others that work hard to ensure that a horse has the best possible chance of winning an event such as the Grand National. The most obvious of these are the owner or owners of the horse and the trainer.

Of the prize money that is paid out, 75% of it goes to the owner. The trainer of the horse tends to get about 10%, which is only slightly more than the jockey, with about 5% being split between stable staff and racing charities.

Obviously the best trainers, such as Willie Mullins and Nicky Henderson, can make their own arrangements with owners when it comes to the percentage of prize money that they receive. What we’re talking about here is just the average, so that figure can go up or down depending on the level that the trainer is working at. It is also worth pointing out that trainers get a fee to work with the horses in the first place, so they’re a lot less depending on prize money in terms of finances than owners tend to be. For an owner, the prize money is the main incoming money.

Where Does the Prize Money Come From? 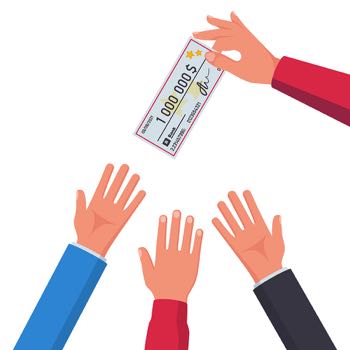 An obvious question to ask when it comes to the prize money paid out for the Grand National is where is actually comes from. We have already mentioned the sponsor of the race, which is arguably the most important factor. Another relevant factor is the amount of tickets that are sold to the public, given that a portion of this is added to the money offered by the sponsor to help round things out. This was noteworthy in 2021 when there were no crowds allowed into Aintree Racecourse, meaning that the overall prize money dropped.

Having been £1 million in 2019, it was £750,000 in 2021 because no one was in the venue other than the essential people to allow the racing to go ahead. With more than £3 million given out over the course of the Grand National Festival, the money taken from people on the course is a crucial part of that. The feature race on Ladies Day, for example, is the £250,000 Melling Chase, which was boosted by £50,000 for the 2022 renewal. Other races with decent prize money attached include the Liverpool Hurdle and the Gaskells Handicap Hurdle.

The History of the Grand National’s Prize Money

With £1 million on offer for the 2022 renewal, the Grand National is the United Kingdom’s richest jump race. As you might imagine, that hasn’t always been the case, with the amount on offer to successful horses having changed a lot of the years. There is no real information about how much Lottery’s connections won when the horse was victorious in the first ever Grand National in 1839, but we do know that 100 years later the horses were competing for £10,000. Workman beat out 36 others to take the win that year.

A decade earlier, winning owners received £5,000 in prize money, which is about £300,000 in today’s money and gives you an indication of how important the race was seen as being even then. By 1958, having hit the £10,000 mark for the first time in the aforementioned 1939 renewal, it had crept up to £14,000. When Red Rum won the race in 1973, the New York Times reported that he won $98,600, which was about two-thirds of the overall prize money available to all of the horses running that year.

In 2005, John Smith took over the sponsorship of the race and the prize fund went to £700,000. From there, it actually began to fall for the first time, sitting at £689,360 a year later and dropping to £450,640 two years after that. Of course, the race’s popularity meant that prize money was going to creep back up over the years that followed, which is how we got to the point that the 2019 renewal was worth £1 million. The absence of crowds saw that figure drop back in 2021, but it went back up to a total purse of £1 million for 2022.