Originally touted under the name of ‘The Series’, the new Racing League is an attempt to make horse racing more popular with the masses by introducing a team element to the sport. Whilst horse racing has always been generally quite popular and events, such as the Cheltenham Festival and the Grand National, see thousands of people turn their eyes to the sport, it has suffered from a lack of interest when the biggest events aren’t taking place.

Branded as an ‘evolution’ for the sport, the hope is that the Racing League will make horse racing more accessible for the average sports fan. A large part of the reason for the launch of the Racing League, according to the people behind it, is the desire to improve the public perception of the sport. It is seen, believe CHR, as a ‘complicated, elitist recreation inextricably linked to gambling’. This can be changed, it is felt, by offering a more accessible format.

Moving Away from the Perception of Horse Racing 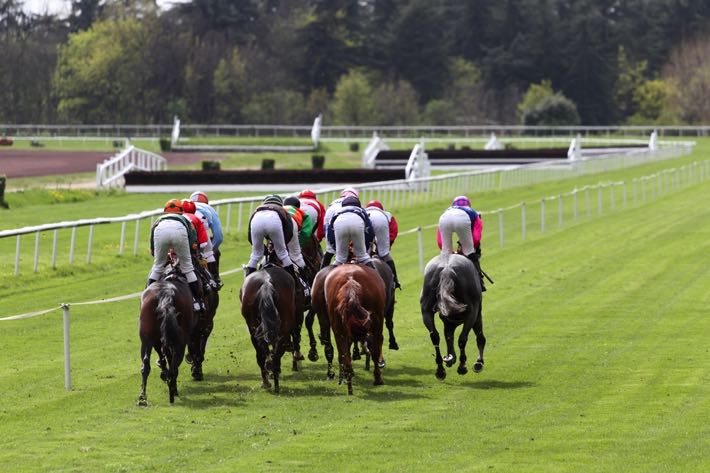 It is noteworthy that a brief visit to the official website for the Racing League will present you with ‘stories’ from countless different people about their enjoyment of horse racing. One of the first voices is that of horse racing blogger Abbeigh Harris, who declares, “You don’t have to gamble to be a fan”. Meanwhile another blogger, Zoe Smith, believes that “Horse racing welcomes everyone, no matter what background”.

It’s clear that the plan for the Racing League is to paint the sport in a totally different light to the one that the majority of people associate with horse racing. Those behind it are hoping to rid the sport of its stuffy reputation and the feeling from many that you can’t enjoy watching horse races unless you’re also willing to have a bet on what’s taking place. It’s a difficult argument to make, given the industry’s inescapable links to the world of betting.

Even so, the aim of the Racing League is to give people an entry point into horse racing via a format that they believe is more accessible and will be ‘gripping, thrilling and unmissable.’ Instead of being driven by betting, the idea is that the new format will put data and technology at the forefront in order to enhance the viewing experience. There’s also a feeling that the Racing League will help to welcome a new generation of fans to horse racing.

What Is the Racing League? 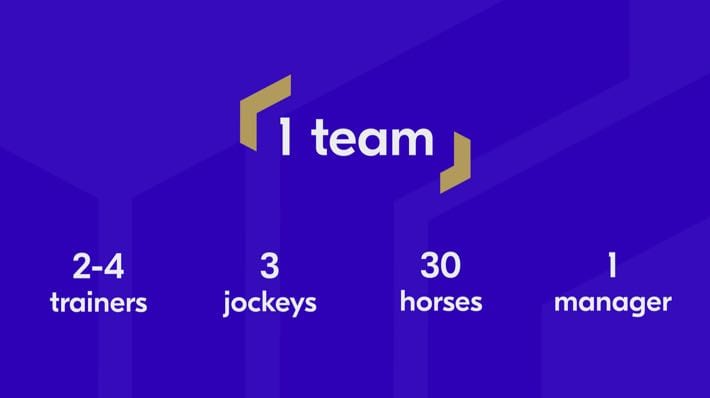 The idea behind the Racing League is a relatively simple one. The hope is to create an even similar to the Ryder Cup, in the sense that it will create teamwork out of a sport that is typically about the individual. Each race has a £50,000 prize attached, meaning that the participants will have good reason to want to be successful in each and every race. Pitting twelve teams against each other, the events will take place at four different courses.

The good thing about the Racing League is that the name tells you pretty much everything you need to know. It is horse racing but in a league format, with points available to all competitors. Only the horses that come in last and second-to-last will win no points whatsoever, meaning that virtually every position is worth fighting over. It’s indicative that the Chief Executive Officer of the company behind it used to be the Chairman of a football club in terms of what to expect. 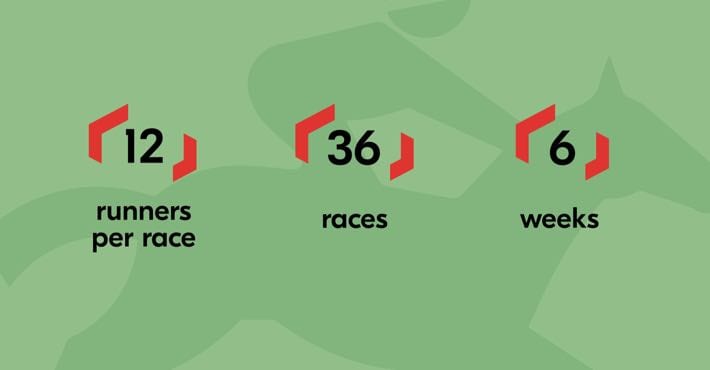 The most interesting aspect of the Racing League is how it is designed to work. The entire concept is based around the idea of turning the typically solitary world of horse racing into a team sport. There are twelve teams, which have access to thirty horses. The horses can be ridden by three jockeys and there are between two and four trainers working with each team. On top of that there will also be the necessary stable and veterinary staff working with each team. 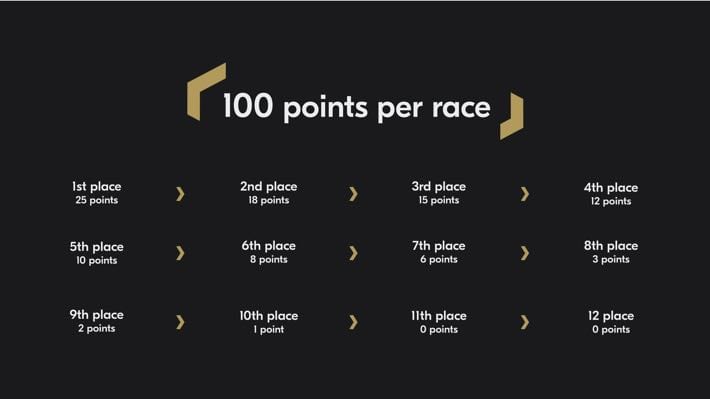 There are six meetings involved in the Racing League, with six races taking place at each of them for a total of thirty-six races. Each race has one hundred points available to be won, which are awarded as follows:

Each team has a manager. They will be responsible for deciding which horses will take part in which races, ridden by which jockeys and so on. The races are all handicap events that are open to hoses aged three and over with a handicap rating of between 0 and 90.

Teams will enter one runner into each event and there will be a guaranteed field of twelve for each race, thanks to the number of horses associated with the twelve teams. Owners are able to enter horses into more than one team, with only the trainers and jockeys limited to the team that they are initially chosen for.

The six races at each meeting will be of different lengths, with the following being the distances that have been decided upon:

The races will be run under the newly emerging ‘hands and heels’ rule. This means that the jockeys will have a whip but that it can only be used for the correction of a horse and the horse’s safety. Jockeys will not be allowed to use the whip to ‘encourage’ their horse to run faster or harder and may be disqualified if it is felt by the stewards that this is was the whip was being used for at any point during the race.

In order to keep the participants as fresh as possible, there will be a ‘squad reshuffle’ of the horses after four weeks of races. There are also rules in place to protect the jockeys, with no jockey allowed to ride in more than three races per meeting. On top of that, a jockey can only have a maximum of eighteen rides during the Racing League, which is why there are three on each team and managers will be encouraged to use them all. 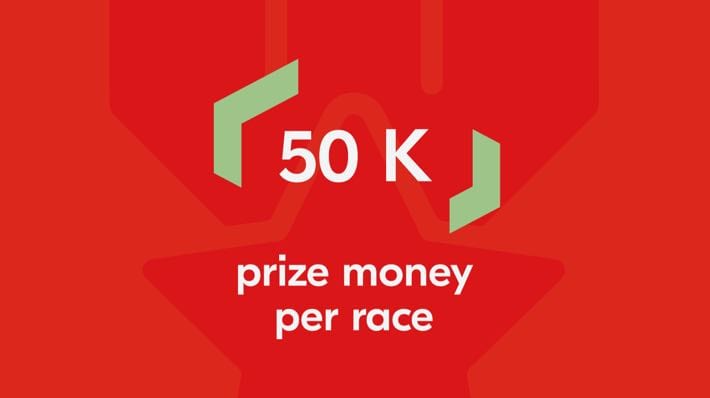 Every race will have a prize pot of £50,000 attached to it, meaning that the total prize money for the competition is £1.8 million. The money will be distributed according to the distribution rules of the British Horseracing Authority, meaning that money will go to owners, trainers, jockeys and so on. The amount of money that was on offer when the competition was first mooted was less, but the BHA heeded calls from owners to add a larger prize pool.

The eventual champions of the Racing League, which will be the team that has amassed the most points at the end of the competition and the conclusion of all thirty-six races, will also receive a team bonus. Part of the plan to increase engagement with the Racing League involves the use of ‘Super Fans’, who will be ambassadors for the sport. They will win big if the team that they support also ends up winning the Racing League.

As an addition to the flat racing season, the idea behind the Racing League is that it will be a fun-filled event. As a result, the meetings will take place on summer evenings. The event will make use of the following four tracks:

The competition’s organisers want to make the event about so much more than just the races. The aim is to engage the public as much as possible, giving watchers the chance to engage with the participants both at the course and via different media. Alongside the races there will also be live music, food festivals and eSport tournaments taking place, which are aimed at engaging people as much as possible away from the course.

Is It Dumbing Down Horse Racing?

There are some critics of the Racing League, with the general take being that it is dumbing down horse racing. The fact that each team will take on a sponsor that the team will then run in the colours of is also seen as problematic, given that the sponsorship rights will probably be handed to the companies that pay the most money as opposed to are the most socially responsible companies to work with from a horse racing point of view.

There’s also the fact that, as much as those behind the venture might like to pretend otherwise, the link between horse racing and gambling is ever-present. It’s not as though you won’t be allowed to bet on the various races, with many punters being pleased at the fact that they can bet both on the outcome of each event and on the overall winner of the entire competition. In some ways, the desire to move away from the gambling industry is hollow at best.

There are certainly plenty of people that love horse racing because of its complexity. Yes, lots of people say that they either haven’t got involved in horse racing or haven’t come back to it after a brief involvement because they felt that their level of knowledge wasn’t good enough. Yet there are plenty of others that enjoy feeling as though they know something that other people don’t and that their knowledge is rewarded.

Ultimately, the aim of the Racing League is to make horse racing accessible, which can’t really be seen as a bad thing. If more people begin to enjoy horse racing then that’s good for the entire industry, even if they don’t want to place a bet on the winner of each race. It’s also worth noting that the competition’s existence doesn’t mean that other forms of horse racing will cease to exist. The Cheltenham Festival isn’t going anywhere because this has been created.

The hope is that the Racing League will ‘demystify’ horse racing. By making it easier to understand, it’s likely that people will then begin to engage with other race meetings and events. By putting fans at the heart of the experience, the Racing League aims to bring more people to the sport and get them to stick around. Whilst it’s difficult to envisage people following a team in the same way that they do with something like football, it is at least a start.

It’s absolutely the belief of Jeremy Wray, the driving force behind the event, that ‘innovation always meets scepticism’. According to Wray, the hope is that new sponsors not already involved in horse racing will be attracted by the idea of the Racing League and that it offers a ‘small beacon of light’ for the sport. Given that it’s been looking for funding from new sources for some time, the hope is that this will offer a new way of looking at horse racing.