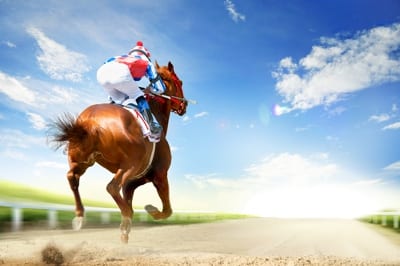 When it comes to horse racing, even the most casual observers will know the names of some of the sport’s most respected jockeys, whether that be retired aces like AP McCoy or household names, such as Frankie Dettori. Ask people to name some trainers and they’ll almost certainly have heard of industry heavyweights, such as Willie Mullins and Nicky Henderson. Yet when it comes to arguably the most important people in the horse racing process, the owners, they tend to be something of a forgotten breed.

The exception to the rule, however, is celebrity owners who often turn up for the biggest horse racing events, such as the Grand National and Royal Ascot. They get themselves in the paper and on television, enjoying the exposure that comes with being a horse owner and gaining the same exposure for their steeds.

Obviously the likes of the Queen of England and Sheikh Mohammed bin Rashid Al Maktoum of the United Arab Emirates are on the list, but we’re interested more in the sports personalities and movie stars that have taken to buying horses as a hobby. Here’s a look at some of the best examples:

The former Manchester United manager has long been a fan of racing, but his name will forever be associated with one thoroughbred in particular: Rock of Gibraltar. The reason for the infamy surrounding the horse is complex, not least of all because the Scot was listed as the horse’s joint-registered owner with John Magnier’s wife Sue in spite of the fact he hadn’t actually paid any money for it; the horse was owned by Magnier’s Coolmore Studs.

Ferguson was under the impression that he’d been given his share of the horse as a gift, whilst Magnier felt that the United manager was owner in name only, enjoying the trappings of ‘owning’ a horse without any of the responsibilities. Rock of Gibraltar went on to win seven Group 1 races, leading to a valuation of close to £200 million when he was eventually sent to stud. It led to a major falling out between the pair when Ferguson felt he was entitled to a large payout but Magnier disagreed.

In the end, the Scot settled for a payment of £2.5 million for his share in the horse, but problems between the pair continued and ended up influencing events at Manchester United, where Magnier was a shareholder. It led to the footballing stalwart being put on a yearly ruling contract rather than a permanent one and many believe led to the eventual sale of the Red Devils to Glazer family. It didn’t put Ferguson off owning horses, however, and he watched his part-owned horse, Clan Des Obeaux, take part in the 2019 Gold Cup at Cheltenham.

Plenty of footballers have invested their millions in racehorses, including Wayne Rooney and some of his Manchester United teammates when he played for the club. Michael Owen is arguably the one that has taken things the furthest, however, actually going as far as to start up his own stables. Manor House Stables has a huge number of horses on its books and Owen is part of a team that breeds racehorses there.

The former Liverpool, Real Madrid and Newcastle United striker even tried his hand at racing himself when he took part in a charity race at Ascot in 2017, finishing second. Little wonder, considering his Cheshire-Based facility is home to trainer Tom Dascombe. Owen watched Manor House’s Brown Panther win the King George V Stakes at Royal Ascot in 2011.

Jeremy Kyle might well be more used to dealing with family feuds than racehorses, but he saw the horse that he part-owns, Glen Rocco, win in just its second race at Ballindenisk in May 2016. That was in the horse’s more formative years, however, but in 2018 and 2019 Jezza was able to celebrate victories at Fontwell and Kempton.

There was hope that Glen Rocco would take apart in the Cheltenham Festival in 2019 but he was withdrawn when he finished sixth in a race at Kempton towards the end of February. Instead, Kyle and the horse’s other owners are aiming for a decent run at the Grand National in 2020.

Most actresses would adore the CV that Dame Judi Dench boasts, with a fair few horse owners not being too far behind. She co-owns As De Mee, which finished seventh in the Topham Handicap during Grand National weekend in 2016 but won races at the likes of Fontwell and Kelso. He also finished first on the Grand National course when he won the Grand Sefton Handicap Chase at Aintree in December of 2016.

Dench didn’t limit her horse racing experience to As De Mee, however, and saw another horse that she co-owned, Smokey Oakey, win seven times and bring in more than £150,000 in prize money during its career. Dame Judi had long been a fan of horse racing before she became an owner, proving that you don’t buy a horse or even a stake in one if you are trying to make an investment. 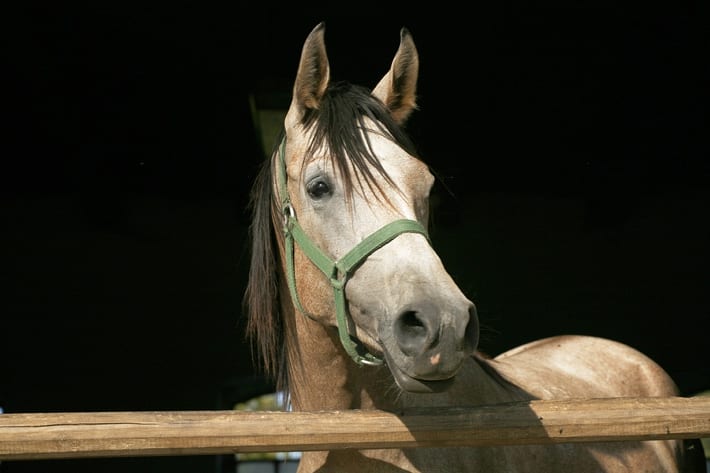 Now you’re probably wondering how these celebrities went about buying a racehorse and what it actually cost them. Obviously things are slightly different when you’re talking about thoroughbreds that will likely take part in the most prestigious races in the country compared to people that own a horse for their own pleasure that they keep in a stables, so that’s an important initial distinction. We’re focussed on the former here, though many celebrities probably do own horses for their own riding pleasure too.

Horse racing is known as the Sport of Kings, but you don’t need to be a king in order to own one of the thoroughbreds that take part in Britain’s biggest races. Instead, the most important thing is a fair amount of disposable income, not only because of the amount you’ll need to buy one on the first place but also because of how much it will cost for their maintenance and to get them ready for racing. According to the Racehorse Owners Association, every £100 spent annually on the upkeep of a horse results in approximately £21 return.

That’s not to say that racehorse owning is limited to the rich and famous, of course. More than eight thousand people in the UK have some share in a racehorse and those with a vested interest range from electricians who love the sport and want some part of it through to royalty. The problem is that there’s no guarantee that being a racehorse owner will earn you money and if you lose your money then there’s nothing you can do about it.

The first thing to acknowledge is that some people own horses outright, whilst others just own a share in one. The next thing to bear in mind is that National Hunt horses, the sort that will take part in the Grand National or the Gold Cup, are less expensive than flat racing horses, the likes of which you’ll see at Ascot.

How Much Does It Cost to Own a Racehorse? 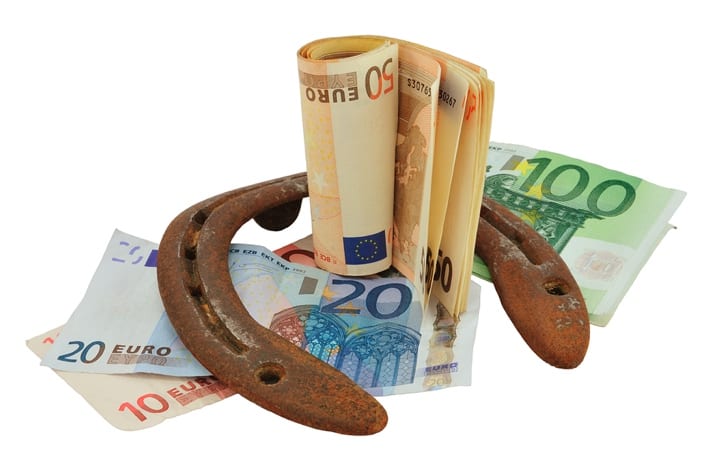 Here’s a short list of just some of the things that our celebrity owners (and average horse-owning Joes) will need to pay for:

Each of those things can vary wildly in cost depending on circumstance. Training, for example, can cost around £20,000 per year, with the quality of the trainer dictating how much you’ll have to spend on that front. Race entry fees will also be more costly for the better-known races than the ones that few people care about apart from the horse racing industry insiders.

The Racehorse Owners Association suggest that the cost of owning a jump horse in 2015 was about £16,325 on average and £22,595 for a flat racing horse. That cost included all aspects of owning a horse, including all of the things mentioned in the list earlier with the exception of insurance and VAT.

Perhaps the most interesting part of the ROA’s survey from 2015 came in the ‘Cost Per Run’ category, which amounted to around £3,000 for flat racing horses and £3,500 for those that take to jumps. It would arguably lead owners to question whether they should even bother entering their horse into race with a prize of £3,000 or less, given that it will end up costing them money even if they win.

When buying a horse, people tend to either buy it outright or join a syndicate in which multiple people own a horse. It would be natural to assume that syndicates are the way into horse ownership for the likes of plumbers, builders or teachers who want to experience horse ownership, but that’s far too narrow a viewpoint. Celebrities, such as actress Elizabeth Hurley, and former Manchester United manager, Alex Ferguson, have joined syndicates to buy racehorses in the past.

Syndicates were initially the brainchild of Highclere Thoroughbred Racing, a company that was setup more than twenty years ago and that boasted the same bloodstock buyer as the Queen. Syndicates are a cheaper way of getting involved in horse racing ownership but don’t think that that means that the experience is cheap. HTR suggest that shares in one of their horses range from around £7,000 to £47,500. That fee covers year one, with another due for year two and each subsequent year that you wish to remain in one of the syndicates.

The good thing is that the fees include all costs, which is where syndicate ownership differs from sole ownership in most cases. Buying a horse on your own means that you need to shoulder the burden of buying the horse in the first place and then all of the associated costs discussed above. That’s what makes sole ownership such a costly enterprise and limits the experience to the richest of the rich more often than not.

Previous Post: « Insider Betting: What Are the Rules When You Have Inside Information?
Next Post: Football’s Gambling Problem: The Players Banned or Fined for Betting »