The ‘World’s Greatest Steeplechase’ is one of the most-loved horse races, causing both horse racing fans and those that never usually watch the sport to tune in every time that it rolls around. Such is the fascination with the race that when it couldn’t go ahead in 2019 because of the Coronavirus epidemic, a computerised version of the race was created for the BBC to broadcast in place of the real thing.

The race is famous, at least in part, because of the feeling that any horse can win it. A notion that was sowed into the public’s psyche in 1967 when 100/1 shot Foinavon won thanks to a pile-up at the 23rd fence that he was so far away from he managed to avoid. Every bettor wants a way of getting ahead of the bookmakers for the National, so on this page we’ll look at the trends and stats from over the years.

How Often Does the Favourite Win?

One of the main questions that one would want an answer to as far as the Grand National is concerned is how often the favourite wins the race. It always feels as though the field is open to absolutely any horse during the Aintree race, but is that actually true? The official records of the race span back to 1839, which is the year that most historians belief counts as the first to feature a Grand National.

That year’s race was indeed won by the favourite in the form of 5/1 offering Lottery. Rather than look back of more than 100 years of races, however, we’ve decided to use the cut-off point of 1984. Far from being an arbitrary decision, that was the year that the field size for the race was limited to 40 horses for the first time. Here, then, is a look at the years that the favourite won from 1984 to 2019:

You can see, then, that just six favourites won the race between when the field was limited to 40 horses in 1984 and the 2019 outing, which was the year that Tiger Roll won it for the second time. Given that the result has stood every year bar 1993, which was when two false starts ruined the event, it means that there have been 35 winners. That’s means that the favourite has won just 17.14% of the time.

From a betting point of view, had you placed £1 bet on every favourite since 1984, including joint-favourites, you’d have finished the period mentioned above with a net win of £6. The favourites might not win very often, then, but the nature of Grand National odds means that it’s still worth having a bet on them if you’re going to do so every year. Betting on them and another selection or two could be the way forward. 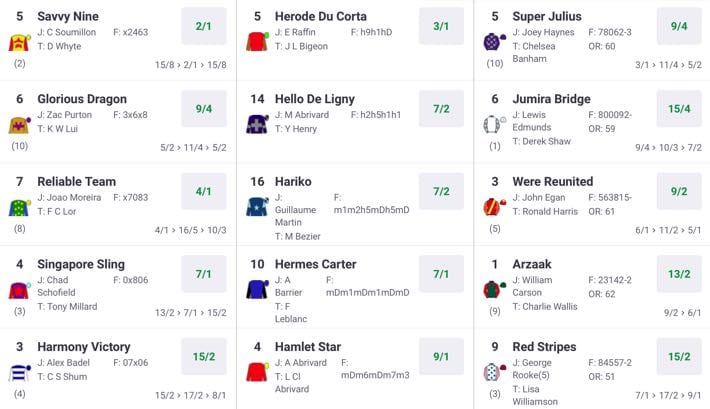 Now that we know how rare it is for the favourite to win the Grand National, it’s worth having a think about whether there are any other signs we can look out for when it comes to predicting the winner of the ‘World’s Greatest Steeplechase’. Given it’s the bookmakers that we’re trying to take on when placing our bets, the first place to start is with the average odds of the winners over the years.

Here’s a look at the odds that were assigned to the winners of the race between 1984 and 2019: 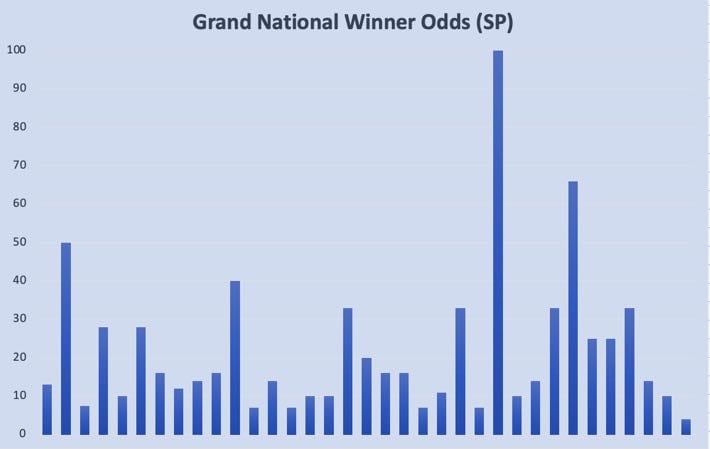 There are a few things that we can learn from the list of favourites and their Starting Prices. The first is that 7/1 is the most common price of a winning favourite or joint favourite. The second is that there have been a good number of relatively long odds-winners of the years, so it’s always worth having a punt on a horse that seems to be priced quite long by the bookies if you think they’ve got it wrong.

When it comes to the average odds of the winner, that works out at just shy of 22/1. The number is thrown out of whack somewhat by the presence of Mon Mome, the 100/1 shot that won for Venetia Williams in 2009. Even so, looking at a price that sits around the 22/1 mark would be the worst thing when it comes to selecting a bet separate from the favourite that you’re going to place.

The most popular price for a winner in that selection is 10/1, which was the price of the winner five times between 1984 and 2019. 7/1, 14/1 and 33/1 are a close second, with each of those prices come up four times during that period. It’s obviously not a clear pattern, but it does give you some indication of the sort of price given to winning horses by bookies more of then than not. 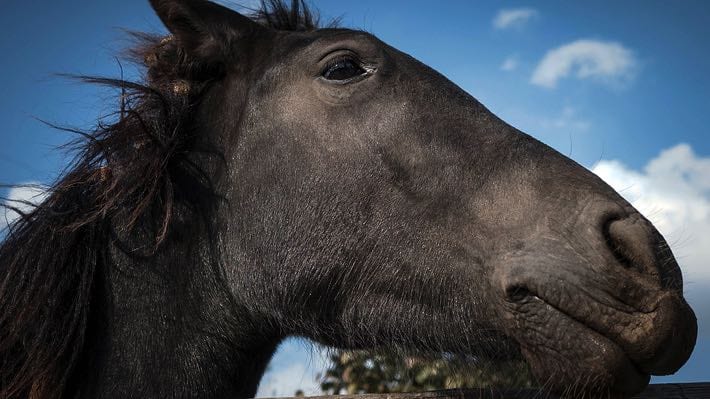 As with the average odds, the average age of the winners of the Grand National might give us an extra bit of information to consider when figuring out which horses to place our bets on. The horse needs to be over the age of seven in the first place, boasting a rating of 120 or more according to the British Horseracing Authority, so we’re not going to see young horses featuring anywhere on this list.

The first notable thing from the list is that no horse has won it as a 7-year-old. The second is that only three horses have won the race at the age of 12, suggesting that we can pretty much rule out horses that are running the race for the first time or are almost certainly in the last Grand National of their careers. With that in mind, then, it’s not unreasonable to imagine that the winning horse will be 8, 9, 10 or 11.

Eight of the winning horses were 10, nine of them were 11, ten of them were 9, five of them were 8-years-old and we’ve already mentioned that three of them were 12. There have, therefore, been more 9-year-old winners of the race than any other age in the elected time period. That being said, it’s interesting to not that the average age was younger towards the more recent runnings of the race.

The average age of the winning horse in the Grand National in the time period that we’ve looked at here was 9.57. That fits in with our theory that you can throw out the 7-year-old and 12-year-old horses, unless the latter has something impressive about them that makes them worth considering. Again, it’s not exactly a hard and fast rule but it does give us some useful information to work with.

What Was Their Handicap? 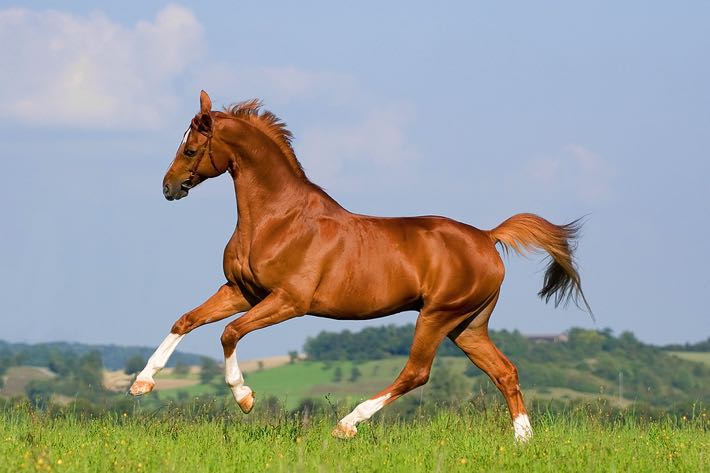 Given the fact that the Grand National is a handicap race, thinking about the amount of weight that the horses are asked to carry could be another indication of which ones are most likely to win. The handicapper assigns the weight that each horse carries on the basis that it makes for a level playing field, with the dream being that all 40 horses cross the finish line at exactly the same moment.

That never happens, of course, but that doesn’t mean that the weight isn’t a useful thing to consider. The following list shows the weight carried by the winning horse in stones and pounds: 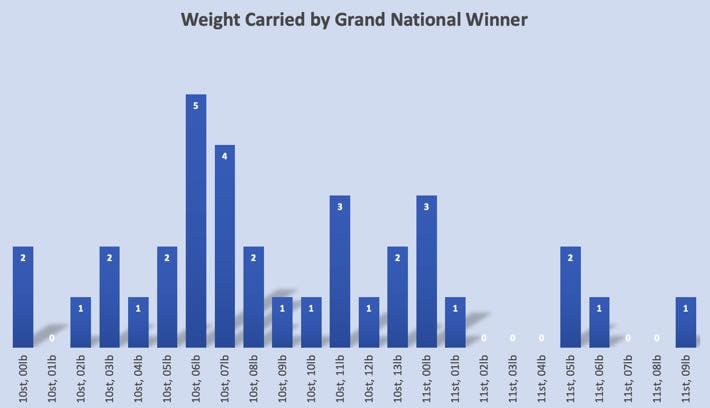 It’s far to say, then, that the most common weight for a winning horse to carry as their handicap in the Grand National is 10 stone and something. That being said, it was more common for a horse to win the race carrying 11 stone and something towards the end of the above list. The key thing, perhaps, is that a heavy weight shouldn’t necessarily be used as a reason to rule a horse out of the possible winning.

The average weight carried by a winning horse in the Grand National is about ten and a half stone, give or take. As with the other averages that we’ve worked out, it’s far from a perfect method of working but it at least gives us a general idea of what to look out for when we’re looking to select out horses. Of course, the ‘World’s Greatest Steeplechase’ is exciting precisely because anyone can win.

What statistics and trends can we take from the previous Grand Nationals that have taken place since the field was limited to 40 horses? The following averages are in play:

Obviously, the above information is far from being hard and fast, with many of the winning Grand National horses not meeting the criteria laid out in the list. Even so, it does give us a solid sense of what we should be looking for when trying to identify a winning horse. In essence, we’re looking for an experienced horse that isn’t the favourite, isn’t carrying an overly large amount of weight and doesn’t have outrageous odds.

Previous Post: « Weird Sports at the Olympics: From Pistol Duelling to Solo Synchronised Swimming
Next Post: Is Bingo Considered Gambling? »