In the world of betting, everyone who has ever placed a bet will have at least a vague idea what a Starting Price is. Simply put, it is the collation of various Starting Prices offered by bookmakers on the likes of a horse to win a race when the event gets underway. Sometimes the Starting Price will be better than ante-post odds, sometimes it will be worse, but either way it gives us a sense of how favoured or not the bookies think something is.

The Betfair Starting Price, meanwhile, works in a similar sort of way but is based on the odds that are on the exchange at the time that an event gets underway. It has gradually become something of an industry standard over the past decade and a half or so, given that it is seen as the ‘purest’ form of Starting Price that there is. It is, in essence, dictated by the supply and demand of bettors and those willing to offer them odds on various events.

A Brief History of the Starting Price 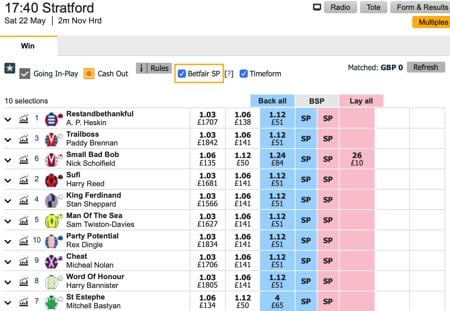 The Starting Price is the odds that you’re offered on a specific outcome, typically of a horse race, as the event gets underway. The Starting Price Regulatory Commission is responsible for both the accuracy and the integrity of bets that are placed on British horse racing tracks, with the independent body ensuring that the price offered to punters most accurately reflects the price that bettors would have been able to get at the start of a race.

It’s important to note that the Commission is not responsible for setting individual prices, over-rounds or margins, not does it offer some sort of target for them. Instead, they offer a simple and straightforward set of parameters that lead to the calculation of a Starting Price and then ensure that both bookmakers and SP Validators operate within the framework that has been specified by the SPRC.

How the Starting Price Is Calculated

A review conducted in 2020-2021 looked at the composition of the Starting Price and found that only 1.4% of bets placed on British horse racing was taking place on the actual race courses. Thus it was decided that a Starting Price that was generated by exclusively on-course bookies was not an accurate reflection of the betting market as a whole. Off-course SPs were resulting in lower over-rounds than the traditional SPs generated on course.

It was therefore decided that a new method of calculating Starting Prices should be explored. The new calculation of the Starting Price would use a majority of off-course bookmakers’ prices but incorporate the on-course bookies too. The official SP is therefore calculated by taking a sample of bookmakers from both on and off the racecourse that the race is taking place at and doing the following with the information:

The prices would then be put in order and split in half, with these five odds being the longest:

8/1 is the shortest price on the list with the longest odds and is also offered by more than half of the bookmakers in the sample of bookies looked at, so it is the official Starting Price. The minimum number of bookmakers needed to make up a sample is six, whilst the maximum number is 24. In previous years, it could be lower than six if there weren’t that many bookies on a course, but now the change includes off-course bookmakers that no longer applies.

How the BSP Is Calculated

We know how the Starting Price is calculated, then, but what about the Betfair Starting Price? What method is used to determine what that is when a race gets underway? Betfair customers, as well as those using other companies’ exchanges, back and lay bets against one another at a price that is mutually agreed. Bets become matched once both the person backing it and the person laying it are happy with the odds.

Just before an event gets underway, Betfair will work out the average price that has been offered by layers and backed by backers, offering the Betfair Starting Price as a possible price that bettors can take instead of taking the price that they’re offered when they’re looking. The process to come up with the BSP is designed to replicate how the Starting Price is found on tracks up and down the country.

Betfair’s Starting Price, which is expressed in decimals rather than the more typical fractions offered by traditional bookmakers, tends to be bigger than the SP that you’ll get from bookies. This is because there’s far more competition within the exchange markets, meaning that the prices offered will often be higher than with traditional bookmakers who don’t have to compete with each other in the same way.

Why the BSP Matters

It’s believed by many that the Betfair Starting Price is, in essence, more democratic than the traditional Starting Price. This is because the market is set by real people, deciding what prices they’re willing to offer and what prices other people are willing to take. There is no over-round in the same way as there is with normal SPs, because the punters using the Betfair exchange aren’t building themselves a net win into their prices.

Betfair as a company doesn’t make money in the same way that fixed odds bookmakers do. With a fixed odds bookie, they’ll built their margin into their prices, whereas Betfair charges commission on winning bets. This obviously works out better for the punters using the service and is reflected in the Betfair Starting Price. It gives a much purer idea of what a horse’s actual odds are compared to the Starting Price.

You can see from the table that there are some odds where they line up relatively close to each other, such as the 23 Starting Price on Mas Poder compared to the 23.61 offered by the Betfair Starting Price, or the SP of 7 and the BSP of 7.98 on Aplomb. Yet you can also see just how often the odds stray from each other, particularly in the horses with long odds and therefore little chance of winning.

The best example of this comes in the form of the 67 offered on Knight Crusader by traditional bookmakers when compared to the 136.53 that you could have got on the exchange. A similar different can be found between the SP of 67 for Afta Party compared to the BSP of 113.53. It’s probably fair to surmise that bookmakers are reluctant to take a massive hit on horses with long odds and therefore bring their true odds down dramatically.

Whichever way you look at it, the Betfair Starting Price is longer in every instance of the twenty cases that we’ve looked at. Whether they’re hugely off or only a little bit, the suggestion is clear that you’re better off taking the Starting Price with the Betfair exchange than you are with a fixed odds bookmaker. This, of course, is entirely dependent on you being comfortable and confident operating on the exchange, which is a different conversation.

What It All Means

So, what does that all mean? In short, you’re always going to struggle to find a bookmaker that will offer you odds that truly reflect the market value of a horse that you’re looking to bet on. When the horse is likely to win, a bookmaker’s odds will more closely resemble the odds offered on the Betfair exchange. When a horse has little chance, however, you’re not going to get fair odds from a traditional bookmaker.

The Betfair Starting Price is, therefore, a much better place to look if you want to get a real sense of a horse’s chances of winning. It’s in this context that the BSP has become such a useful tool for bettors to appreciate a horse’s ability and the likely mistakes being made by bookmakers in how they price things up. As always, nothing is set in stone but it is a very handy thing to look at when doing your research into which bets to place.

Previous Post: « Is Las Vegas Bad for the Environment: How Much Electricity Does It Take to Run the Strip?
Next Post: What Are Infinity Reel & InfiniReel Slots? »