If you think of a jockey, you’ll doubtless think of quite a small person. This is because they have to weigh a certain amount and the less the weigh the better it is for the horses that have to carry them. Shorter people typically tend to weigh less than taller people, so it makes sense for jockeys to generally be smaller in stature than not. It is not universally the case that all jockeys are short, but it is common for the most successful jockeys to come under a certain height.

The average height of a jockey is between four foot ten inches and five foot six inches. This, in turn, means that they’re able to come in at a weight of between 108 and 118 pounds. There is no height limit for a jockey, but there is a minimum weight requirement. This is in order to make the races as fair as possible, as well as to ensure that the jockeys don’t engage in unhealthy eating habits to get their weight down as low as possible. Even just a couple of pounds can make a difference to what the horses have to carry.

Looking at Their Height

The fact that there is no minimum height for a jockey doesn’t mean that most of them don’t come in within a certain height range. Taller riders will always be more likely to struggle to meet the weight requirements, so it’s common for jockeys to be on the shorter side. The average height of an adult male in the United Kingdom is five foot and nine inches, whilst for women it’s closer to five foot four inches. For a jockey, it’s common for them to be shorter than the average British woman.

The average flat jockey comes in at five foot and two inches, with Frankie Dettori being slight above that average as he’s five foot and three inches. For most trainers, what they look for in a jockey is someone that well proportioned. Jockeys will usually come in at between four foot ten inches and five foot six, though the latter is definitely on the taller side. Jump racing jockeys can afford to be a little bit taller than their flat racing compatriots, simply because they have slightly more weight allowance.

Considering How Much They Weigh

Jockeys and their equipment are weighed-out before a race gets underway, then they’re weighed-in when they return in order to ensure that they have carried the correct amount of weight around the course. The weight of the jockey themselves does get factored in to the amount of weight that a horse is expected to carry in handicap races, so it’s important that they don’t weigh more than the horse would be given in the first place so as not to further impinge their ability to do well in the race.

Keeping the Weight Down

There’s obviously nothing that a jockey can do about their height, but there’s plenty that they can do to keep their weight down as a race approaches. It’s not unheard of for jockeys to do something like run around the course at the start of the day in order to shed a few pounds. This sort of thing will allow them to get within the weight that they need to hit before they get weighed, with even just a couple of pounds making a huge difference in terms of what the horses are being asked to carry.

A jockey’s diet is a more important part of their routine, given the extent to which this can make a massive difference on a regular basis. They will often start the day with a bowl of porridge, but they’ll make it with water rather than milk. Lunch will usually be nothing heavier than a salad, whilst dinner, which is usually eaten quite early, will commonly involve a selection of vegetables and something that will give them nutrients like oily fish or white meat.

It’s a constantly delicate balance for jockeys, given that they need to keep their weight low but their muscles up. It’s important for jockeys to have strong muscles in certain areas, with the biceps and triceps being an area that most will look to target. Cardiovascular exercise is obviously important, but weight training is a must for people that are going to need to control their horses during a race. Muscles, of course, increase their overall weight, which is why it’s so tricky to get it right.

Getting the Diet Right

A big part of being a jockey is understanding nutrition. The days of jockeys eating what they want before sitting in the sauna to sweat it all out are long gone. Instead, the Professional Jockeys Association works closely with the likes of the Research Institute for Sport and Exercise Sciences at John Moores University in order to make sure that their members know what they should be eating and how they should be looking after themselves to ensure that they’re as healthy as possible.

Whilst the National Health Service recommends between 2,000 and 2,500 calories a day depending on whether you’re male or female, the Professional Jockeys Association suggests that their members look to eat about 1,500 calories. Getting the food intake right is crucial to the health of a jockey, with an incorrect calorie intake possibly leading to an impact on bone, metabolic and even brain health. Eggs, protein and oily fish are all vital ingredients in a jockey’s diet.

The one thing to bear in mind is that there is no one-size-fits-all approach to diets. Just as you and your closest friends might have entirely different metabolisms, so too will one jockey differ from another. Instead, they need to take a personalised approach to how they deal with their diet. A jockey that puts weight on really easily will need to be much more careful than one that struggles to gain weight no matter what they do, for example, just as some will be able to lose weight quicker than others. 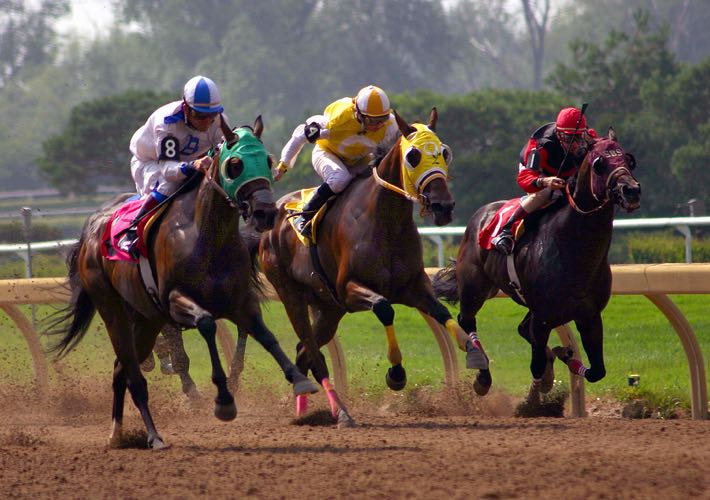 Horses weigh between 900 and 1,300 pounds. A jockey weighing a few pounds more or a few pounds less will make very little difference to their ability to control a horse in the grand scheme of things. A jockey that has a weight of 126 pounds will be about 9% of the weight of a larger horse or 14% of the weight of a smaller one, so it’s not as if they’re going to be safer if a horse falls on them if they weigh a stone more. With that in mind, why does it really matter how much a jockey weighs?

The answer comes in the difference that it can make in a horse’s ability to win the race that they’re taking part in. It’s not unheard of for an owner or a trainer to remove a jockey from a race because they’re as relatively little as five pounds over their weight. It might seem like nothing to us, but to those in the industry it could be the difference between winning a race or coming in third, say. It’s not something to turn your nose up at, which is why it’s taken so seriously.

In order to drive this point home, it’s worth having a think about the allowances that are given to horses in some circumstances. Amateur riders can be given as much as seven pounds in an allowance, whilst female horses can be offered three pounds in certain circumstance. If three pounds is seen as enough to bring a female horse more in line with a male one, imagine what sort of a difference to their racing ability carrying an extra five pounds would make and why it matters.

What Happens If Jockeys Are Overweight

The British Horseracing Authority has rules about what happens if a jockey is over their weight when it comes time to take part in a race. It’s not uncommon for them to be replaced, but they don’t have to be. Instead, they can be ‘permitted to carry overweight’, with the BHA pointing out that this needs to be announced at the racecourse if this is what happens. It is why riders are weighed-out and weighed-in, to ensure that they aren’t overweight or that it is noted if they are.

Indeed, any rider that changes their equipment after they’ve been weighed-out may be fined if they’re found to have done so. Whilst jockeys can ride overweight, they’re not allowed to be four pounds more than the weight that they were due to carry in the race that they’re taking part in. Any jockey that does come in as more than four pounds over the expected weight will not be allowed to take part in the race, meaning that their trainers will be forced to replace them.

The Exceptions That Prove the Rule

There have been some jockeys over the years that have bucked the trend of being a certain height or coming in at a given weight. We’re not necessarily talking about the likes of former NBA star Manute Bol, who was a jockey in a charity race despite being seven foot and seven inches tall. Instead, Patrick Sankey is a good example of a jockey that made headlines when he won a point-to-point race as an amateur jockey in May for 2019, coming in at six foot and seven inches in height.

Sankey does sort of prove the point about tall jockeys, however. He was ten pounds overweight for the race at Bredwardine, being lucky that his horse, Galbally King, could handle the extra burden. Even professional jockeys can be taller than the average, though. Stuart Brown was an Australian jockey who was six foot and two inches tall. The biggest issue that he had was maintaining his weight, with the abuse that he put his body through believed to be part of the cause of his death, aged 43.

Perhaps the most famous example of a tall jockey is that of Bruce Hobbs. Born in Long Island in the United States of America, Hobbs rode Battleship in the Grand National at Aintree Racecourse in 1938, winning the ‘World’s Greatest Steeplechase’ in the process. That is not all that exceptional in and of itself, but when you consider that he was six foot and one and a half inches tall, it suddenly becomes a more impressive feat. He also won the Welsh Grand National, this time riding Timber Wolf.

Previous Post: « What Happened to the Ritz Club Casino?
Next Post: What Are Fifa Ranking Points & How Are They Calculated? »