You are here: Home / Casino Sites / Casino Articles / What Was The First Online Casino?

Online casinos first appeared some time in the mid-1990’s, and a number of brands have tried to lay claim that they were the first. We’ve already written about the world’s first land-based casino but we had to do some digging in an attempt to answer the question “who or what was the first online casino”.

According to their company history, Microgaming developed the first online casino software in 1994. However, the casino management tools and player tracking systems were not launched until 1995 implying that a fully functioning commercial online casino product was not, in fact, around in 1994. 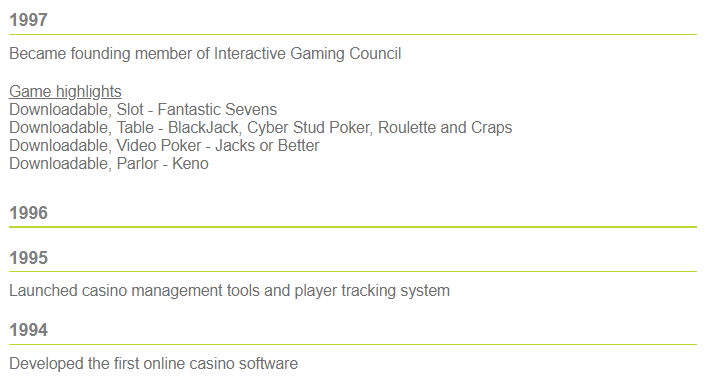 Nipping at their heels were brothers Andrew and Mark Rivkin who, in 1995, developed a secure online financial transaction system and founded a company now known as Cryptologic (formally Inter.tain.net Inc). Seeking a real world application of their brainchild, they set about developing some online casino software. A subsidiary, known as Wagerlogic, was set up to licence the software, and to also handle player support. Financial transactions were carried out by the companies payment processor, Ecash.

The First Casinos: InterCasino and Casino.co.za

With both companies now having a viable platform to run an online casino, the first branded online casinos made their appearance. For Cryptologic Software, the brand was InterCasino whilst Microgaming launched The Gaming Club. But who came first?

In addition to Microgamings claim, the ICANN record for gamingclub.com lists the domain being first registered on 1997-04-17 so if it existed it couldn’t have been on the domain that is currently in use. 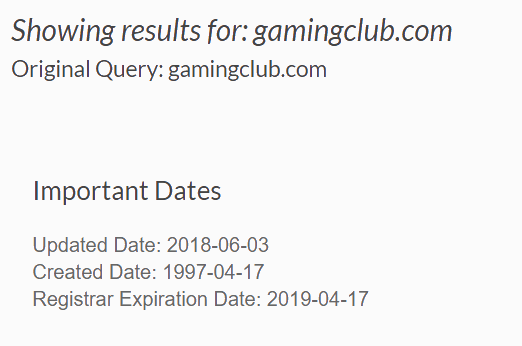 Casino.co.za was the Precursor to The Gaming Club (1996 or Earlier)

It should be noted that Microgaming chose their words carefully, referring to The Gaming Club as “the first online casino to launch in collaboration with Microgaming software”. During our investigation we found another online casino that offered games provided by Microgaming which was around back in 1996 (archive) – we can’t say for sure when the site launched as archive.org only started keeping records in 1996.

The casino was exclusively for South African players and simply called casino.co.za (the website has long since gone and been replaced by an online gambling portal). Players who wanted to wager real money had to phone the casino to get an account number and password, and deposits were taken via credit card over the phone. You can see a snapshot of the site below or by using the way back machine.

* This screenshot was taken from the archive of casino.co.za in 1997. Note the logo and copyright notice both refer to The Gaming Club.

Cryptologic announced completion of Intercasino Beta 1.00 (archive) on their company website (archive) on 4th July of 1996 (our american friends may see the irony in this date given the recent events surrounding online gambling in the USA). In the statement they claim: 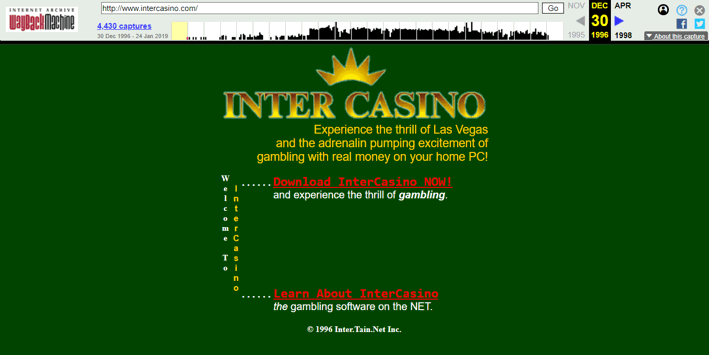 So What Was the First Online Casino?

Clearly the two contenders for first online casino are InterCasino and The Gaming Club, and both companies lay claim to this title – but who is correct? The answer actually comes down to how you define an online casino.

We do not have the exact date that casino.co.za launched, but we have been able to find footprints going as far back as March 1996. Unfortunately we are unable to check when the domain was first registered as it has since dropped and been re-registered and thus has a much more recent registration date.

It is feasible that the site was launched in 1994 making this is the website that Microgaming are referring to when they make reference to their first casino being established in 1994. As there is also evidence that casino.co.za became gamingclub.com it supports their statement that The Gaming Club was established in 1994, albeit under a different name.

This means that The Gaming Club was likely the first site to offer online casino games for money (under the name casino.co.za and only in South Africa), although payments were not done online and had to be manually processed. Some could argued, therefore, that it wasn’t a fully fledged online casino.

We can’t say for certain when The Gaming Club went live with online payments, but as late as 1997 their website was still making reference to setting up accounts and submitting payments over the telephone: 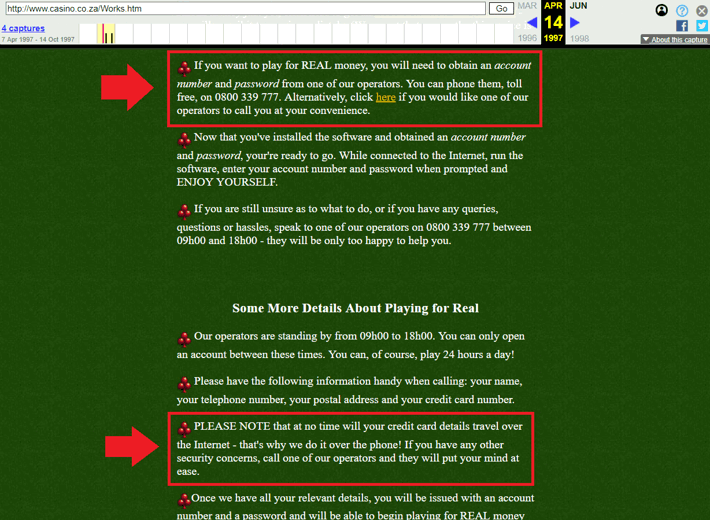 Because we known Intercasino launched in 1996 and used the ecash system from day one, we can confidently say that Intercasino offered online account management and payments before Casino.co.za.