In the world of gambling, few falls from grace are extreme as the one suffered by Football Index. The site was originally created as a sort of stock market of footballers, giving people the opportunity to buy ‘shares’ in a football player and be paid out depending on their performances. Ultimately, it was always a gambling platform, but it was one that sold itself as being more akin to the stock exchange.

On top of being able to buy and sell shares in players, punters also received dividend payouts when players performed well or met certain other metrics. During the 2019-2020 season, for example, these payouts amounted to more than £11 million. The company sponsored the shirts of Queens Park Rangers and Nottingham Forest, but they went into administration in March of 2021 and bettors lost huge sums as a result.

The Rise of Football Index 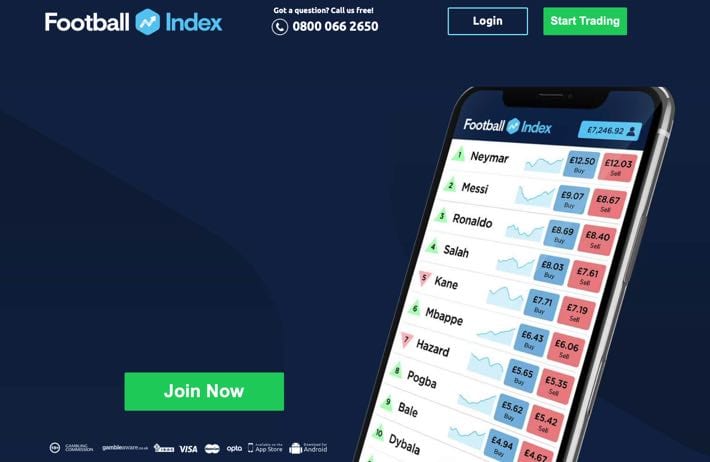 Adam Cole, the founder of Football Index, started Electric Video, a company which worked on pre-recorded video and then DVD, which he sold to Richard Desmond. On top of this, Cole also created MyVillage, a website that allowed people to list restaurants, bars and other services that were available in the United Kingdom. He then launched Football Index via BetIndex Limited in October of 2015.

In order to get the platform off the ground in an incredibly competitive market, Cole and his team secured £1.92 million in investment from Burlywood Capital, which was the venture arm of Mark Blandford, who had set up SportingBet. He was impressed with the people that Football Index had in place to grow the business, so he allowed them to retain control of it and take it off the ground.

How It All Started

The original idea was a simple one: allow people to buy and sell shares in footballers using real money. You could effectively invest actual cash into the future development of a player, selling your investment to someone else for a net win when their worth went up. On top of that, you could also earn cash from the Buzz Chart, which monitored a player’s status in the news on a daily basis, receiving a dividend as a result.

It started life with a base value of 1,000 points, charging 2% commission on sales as a way of making money. Owned by Index Labs, which was formerly known as Fame Ventures, they opted to host a crowdfunding bid to raise £800,000 in exchange for 15.10% of equity, which they accomplished. With more than 13,000 live users within a year, the platform proved to be extremely popular with punters.

Cole’s ultimate ambition was to turn both sports and celebrities into ‘tradable assets’, starting with football because of the sport’s popularity. In the United Kingdom alone around £17 billion is bet on it, suggesting that there was plenty of scope for the company to develop. Within a couple of years the number of users had increased to 100,000 or more, with more than £1 being traded in a single day.

Once Football Index began to take off, the decision was made to spread the message of what was available for punters. Well-known football commentator, John Motson, was brought in to be the face of the company, appearing in radio and television adverts during the 2018-2019 season. Spanish journalist, Guillem Balague, also joined and hosted trader events, followed by German journalist, Raphael Honigstein in 2019.

Sponsorship of Bristol Rovers and Nottingham Forest football clubs began in 2018, with Queens Park Rangers added to that roster two years later. The company also began sponsoring Jim White’s show on TalkSport in 2019, with the presenter, who is best known for being the host of the Sky Sports Deadline Day show on Sky Sports News, regularly extolling the virtues of the platform to his listeners.

The move to make it such a popular topic of conversation in the media soon gave the impression that it was a combination of Fantasy Football and a more fun version of the stock market. The company’s almost ever-present nature in the world of football offered it a sense of credibility, leading many to invest thousands and even tens of thousands of pounds into the development of their Football Index portfolio.

Football Index was designed to appear similar to a normal stock market, with a commodity’s value going up or down depending on how well it was performing. Whereas something like British Gas or Amazon’s value might go up thanks to an increase in users, the commodities at play in the world of Football Index were real-life footballers. If they played well, scoring goals say, or got a transfer, their value would go up.

In addition to share prices being dictated according to a player’s performances, users of the platform also received dividend payouts when the players that they owned shares in hit certain metrics. Goals scored, assists achieved or clean sheets maintained would result in dividends being paid out, as might a player being talked about in the mainstream media for one reason or another.

The fact that users were making money, vast amounts in some cases, meant that they soon began to encourage friends and family to engage with it too. The market seemed to be only going up, as discovered by a user who doubled his money in four months and so poured in more and more of his savings whilst telling his friends and family that they’d be mad not to invest theirs too.

Where It Went Wrong 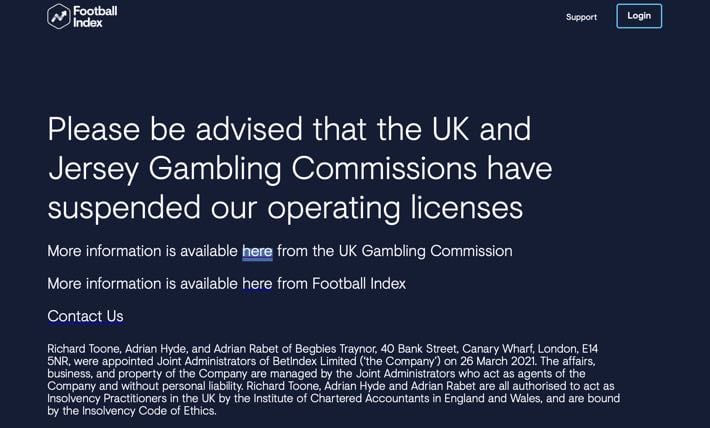 One of the main factors in the demise of Football Index was the fact that so many users seemed to think that it was in good financial health in the months and weeks before things fell apart. At the start of June 2020, for example, Adam Cole expressed an opinion on Twitter that the company’s value could be as much as ten times bigger within two years ‘based on the trajectory’ of it over the preceding two years.

Based on the trajectory and last two years; 10X bigger I’d say #footballindex .

It wasn’t just Cole that was pushing a narrative that all was fine in the world of Football Index. The company repeatedly mentioned plans to expand into the German market, leading many to assume everything was fine. Statements spoke of ‘the basic fundamentals of the proposition and platform are now stronger than ever and an update on November 15th, 2020 said, “We’ve never been in a stronger financial position than today.”

The company was even looking to expand as recently as January 2021, posting an advert for a software engineer that promised a salary of more than £90,000 a year. The more commonly such messages were expressed, the more users on the site poured more money into it, failing to realise that things weren’t quite as they seemed behind the scenes. This is in spite of the company saying in customer service responses that it had a ‘substantial cash reserve’ in place.

The reality is that things spiralled out of control quickly for Football Index customers. The first indication that many people had that there was an issue came too late for them to be able to do anything about. The company released the following statement on the 5th of March, 2021:

To date, our Traders have enjoyed some phenomenal dividend increases year-on-year which have brought some incredible payouts. Continuing this trend is only possible in a buoyant market and the reality is we do not have that at the moment. In consultation with our legal and financial advisors we have had to make the very difficult decision that in order to ensure the long-term sustainability of the platform we simply must reduce dividends. As such, in accordance with our terms, we are giving 30 days notice regarding this change.

The announcement led to a plunge in share prices, with users of the site panicking and trying to sell their shares even if at a loss. This led to share prices dropping even further and the fact that it was always a gambling enterprise, regulated by the United Kingdom Gambling Commission, meant that nothing could be done about it as everyone’s money was always at the same amount of risk as if they’d placed a bet on something.

One user, Ben, put money into the firm in the days before the announcement and quickly saw his portfolio’s worth virtually disappear. He lost more than £4,000 in the space of a week, being affected mentally by what happened. Bettors that had invested in the company stood to lose as much as £100 million, making it one of the biggest gambling failures in the history of the British gambling market.

Part of the anger felt by many of those that had invested their money in Football Index came from the fact that it was corporate decisions that saw their money disappear. Many accepted that if a player suffered a serious injury or moved to a lower league then their value would be affected and they’d stand to lose money in line with that, but that’s not what happened with Football Index’s collapse.

Many bettors who had put substantial amounts of money into developing their Football Index portfolio were left red-faced by the company’s ultimate collapse. They had invested huge sums of money into it, with some seeing it as a way of making enough money to put a deposit down on a house or prepare for retirement. Instead, many have lost tens of thousands of pounds and had to give up their lifestyle as a result.

The change in dividend payout was the crucial factor in value being cut from portfolios. Having paid 14p for the positional win of all positions except goalkeepers, the same amount for the star player and 5p for media dividends, those amounts dropped to 3 pence, 2 pence and 1 pence. It resulted in the net win being slashed by as much as 82%, meaning that customers saw their initial investment essentially completely vanish.

The Company Goes into Administration 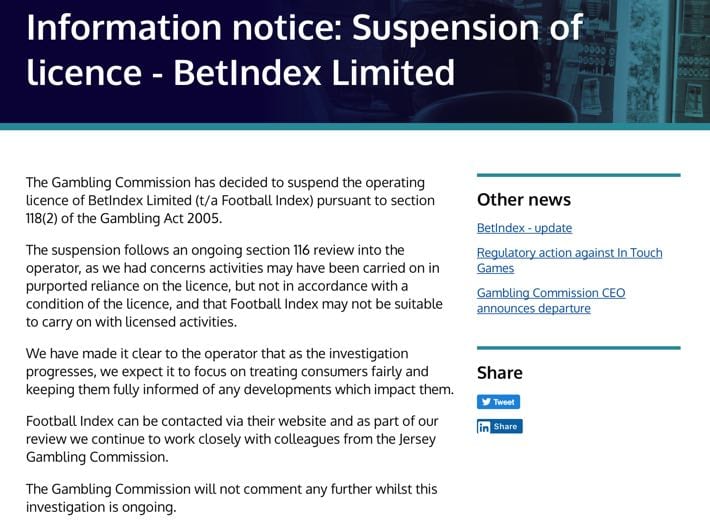 Just under a week after Football Index announced its change to dividend payouts, it released a statement via its parent company, BetIndex Limited, saying that it had entered administration and would be appointing Begbies Traynor, a company specialising in insolvency, to help it move forward. At the time, it said that it was hoping to continue the platform in a ‘restructured form’, though all activities remained suspended.

The decision to suspend operations meant that customers were unable to withdraw money that they held in their accounts. Indeed, the company’s own statement suggested that it would be up to the administrators to get in touch with people that were owed money, including customers, creditors and ‘other stakeholders’. Obviously, the decision was also taken to suspend all investments, with Jersey and British gambling bodies suspending its licence to operate.

Previous Post: « What Is the Hundred? Cricket’s New Fast-Paced Tournament
Next Post: What Is the Difference Between eSports & Virtual Sports? »