Midway through December, it looked as if a group of investors that was being led by a trader who specialised in Non-Fungible Tokens was going to buy Bradford City Football Club. At the same time, a major player in the Bitcoin market, Peter McCormack bought Bedford FC, the club based in the Bedfordshire town of the same name. It was a sign that the world of crypto currency was moving into the football ownership arena, having previously already been involved in the sport thanks to the likes of fan tokens.

In the end, the Bradford City deal fell through, but the group behind the move hasn’t gone away and is aiming to buy a League One or League Two side and take it to the Premier League before too long. Whilst Bitcoin and NFTs aren’t the same thing, they work in similar ways to each other and are certainly less reliable than genuine currency. It is a curious moment for football in the United Kingdom, with what happens next liable to influence the future of the sport in terms of who can and who can’t own football clubs.

Who Is Peter McCormack?

First things first, let us have a look at who Peter McCormack is and why his move to buy Bedford FC is an intriguing one. The British crypto currency investor also hosts podcasts about the world of crypto. His ‘What Bitcoin Did’ podcast claims to be the ‘number one Bitcoin podcast’ on the market. That, of course, is perhaps not all that much of a claim when you don’t know how many Bitcoin podcasts there actually are out there. Even so, it is incredibly popular and McCormack is the man behind it.

Having studied Music Industry Management at Buckinghamshire Chilterns University College at the turn of the millennium, McCormack became the Commercial Director at Evolving Media in 2005. He held the role for two years before he became the Managing Director, then in 2009 he and a colleague set up McCormack & Morrison, a ‘Digital Transformation Consultancy’. He began trading in crypto currencies in 2016, beginning a blog about his experiences a year later and also starting his podcast about Bitcoin. In 2019, he started another podcast called ‘Defiance’.

One of the most interesting aspects of Peter McCormack’s life, especially when it comes to his involvement with a football club, is the fact that he has made and then lost a small fortune on two separate occasions. One of those occasions was when he working at McCormack & Morrison, stating that he ‘turned over three million a year’ and had ‘money in the bank, good salary’. In 2018, McCormack tweeted out a thread about how he’d turned $32,000 ‘into $1.2m and back to pretty much zero’, showing the lack of reliability in the world of crypto.

As the crypto market began to collapse, McCormack failed to react in time, believing that it would right itself. It didn’t, resulting in him losing his fortune, but the experience allowed him to take part in his podcast as something of an expert in the field. He began interviewing all those involved in the world of Bitcoin, eventually launching Defiance as a way of covering other things that interested him. He also hoped to film documentaries in the future, but it remains to be seen whether he will do so over his football adventure. 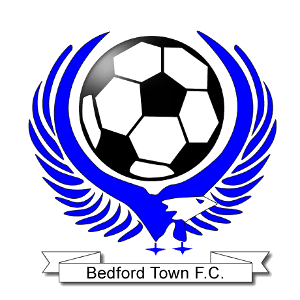 In 2021, Peter McCormack bought Bedford Football Club. The small, local club averaged a crowd of 40 to 50 a week when he took it over, yet he did so with the promise that he’d make it into a Premier League side in the future. If he manages it, it will be a journey that makes films and TV shows look realistic in comparison. Bedford are in the tenth tier of English football at the time of writing, but McCormack feels as though the Bitcoin community can help him in his attempts to transfer the club’s fortunes.

Whilst McCormack is happy with his purchase, it’s worth noting that the side isn’t even the biggest one in Bedfordshire. Bedford Town are to leagues higher up than Bedford FC, meaning that there is a lot to do if he’s genuinely going to get the side climbing up through the divisions. He said that the ‘couple of million’ that Hollywood actor Ryan Reynolds has put into Wrexham isn’t as much as he’ll need to spend on Bedford, declaring that he would be ‘looking to raise far, fair higher than that’, such is the ambition of his goals.

Why McCormack Wants to Get Involved in Football 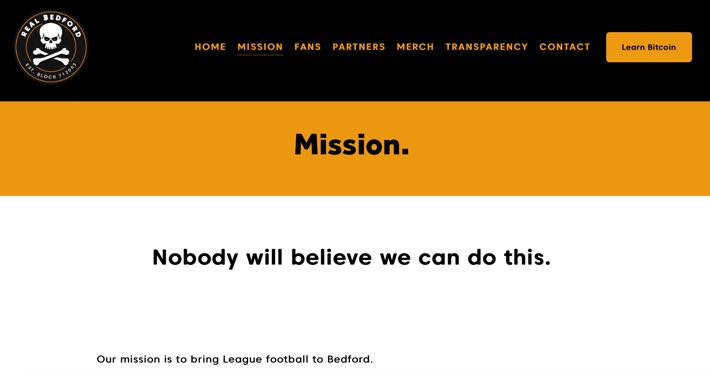 McCormack has already registered a website in the name of Real Bedford, so a name change isn’t out of the realms of what is possible for Bedford in the future. Though he was a Liverpool fan when he was growing up, McCormack is from Bedford and therefore feels an affinity with his home town club. He said, “I always felt Bedford as a town could support a league club – we’re a population of 134,000 people, so I always wanted to buy one of the local teams and have a go at trying to get them into the Football League.”

Perhaps his ambition of getting into the Premier League is an unrealistic one, but McCormack believes that there’s no point in buying a football club if you don’t want to reach for the sky. He said:

My ambition is to bring league football to Bedford, the town I’m from and the town I love, and to give something to the people around here. You have to have an ambitious target, I think it would be embarrassing not to say you want to do something good.

Given the unrealistic nature of the project, it is hardly a surprise that McCormack is refusing to put a timescale on it. The very first step will be gaining promotion from the South Midlands League Division One, with local success the initial problem that his side will have to overcome. McCormack himself is aiming to stay out of the day-to-day running of the club, instead focussing on the ‘marketing and fundraising’ that will give the club a solid base from which to launch its promotion hopes.

Will It Signal a Move into Football for Crypto-Based Companies?

The most interesting thing to watch out for in the coming months and years is whether or not McCormack’s purchase of Bedford FC will lead others crypto-based companies to make similar moves. We know that WAGMI United made an offer to buy League Two side Bradford City in December of 2021, with WAGMI United being a group of crypto currency investors from the United States of America. That move was rejected by Bradford’s Chairman, Stefan Rupp, with the plan being to rely on NFTs to fund the ownership.

Non-Fungible Tokens are things that have unique properties that can’t be interchanged with anything else. They are ‘one-of-a-kind’ assets that exist in the digital work. In essence, such digital tokens are the equivalent of certificates of ownership for physical or virtual assets. Records of who owns which NFT are kept on the blockchain, which is also how information about who owns which Bitcoin amounts is stored. That is why there is such a clear link between the two things and why the move of WAGMI United is noteworthy.

WAGMI United’s attempts to buy Bradford City went well enough for the group to tell the Washington Post that it was in ‘advanced stages’ of buying a club in the English Football League, but Rupp rejected the offer. He said, “As a proud custodian of this wonderful football club, my first and most important responsibility is to protect it and safeguard its long-term future, while upholding our values.” This might well be something of a reference to the likelihood of NFTs being used as the basis for the future running og the club, had WAGMI United succeeded in their purchase attempt.

The WAGMI United group includes the President of National Basketball Association team the Philadelphia 69s, Daryl Morey, a TikTok personality named Bryce Hall and businessman Gary Vaynerchuk. These are obviously people that understand the value of money, yet their plan to use the sale of NFTs to fund the club’s investment in the likes of analytics in their pursuit of promotion had plenty of people in the world of football extremely concerned.

Critics of the world of crypto currency believe that it is essentially like trying to build on sand, never knowing when the ground will shift. Not that that has stopped major global teams like the Los Angeles Lakers selling digital collectibles as a way of making money. Indeed, the venue in Los Angeles that the Lakers share with the Clippers, the Staples Center, is being renamed as the Crypto.com arena after the crypto currency site paid $700 million for the right to do so, ending a 22-year deal for the venue.

Part of Rupp’s reluctance to sell might well be borne out of the fact that group couldn’t even explain how the NFTs would work. Speaking about club-related cryptos, Eben Smith mentioned that characters, kits, pictures and videos would be sold and maintain ‘certain intellectual property rights’. When he was asked to explain what was meant by that, he said that the group wasn’t willing to get into the ‘granular details’ of the purchase. It is all part of the immense faith that some people have in the blockchain.

A World That Is Not Without Problems

In the article in the Washington Post, the suggestion is made that the English Football League was ‘surprisingly progressive’ in conversations that WAGMI United had had with them. When the Athletic spoke to senior sources at the EFL, however, they were surprised to have even been mentioned, having not heard of WAGMI United until days before. Since Bury went bankrupt in 2019, Bolton Wanderers nearly followed them and Macclesfield Town actually did, the EFL has been much more stringent about owners.

Proof of funds is one of the most important aspects of any attempts to buy a Football League club, but quite how a company funded by crypto currency and with NFTs as a blueprint for funding would be able to provide such proof is unclear. Those that love the world of crypto would point to the fact that digital artist sold an NFT for £50 million in March of 2021, whilst other crypto businesses are already sponsoring clubs around the world. Even some of Lionel Messi’s wages to join Paris Saint-Germain were paid in crypto-based fan tokens. Crypto isn’t coming to football, it’s already here.

Previous Post: « What Is Collusion in Poker & How Common Is It?
Next Post: Can You Take Casino Chips Home with You (And Cash Them in Later)? »