A company has launched a new fantasy football league in which players can buy, sell and trade players using Non-Fungible Tokens, or NFTs. Sorare was created in 2018 by Nicolas Julia and Adrien Montfort using blockchain technology that is based on the Ethereum platform. The game has been invested in by the likes of Antoine Griezmann, Gérard Piqué and André Scurrle, offering it a legitimacy that other such games in the past have not been able to boast. The problem is, the Gambling Commission believes it might constitute gambling.

The website boasts more than 100 licensed teams, with users able to buy and verifiably own digital player cards that play for those teams. Line-ups can then be played in fantasy leagues in order to win rewards. On top of this, users can look to sell their cards for money. Having previously looked at the likes of Loot Boxes to see whether they constitute gambling, it is perhaps no real surprise that the UKGC is not impressed with Sorare and is investigating the company to see if it falls foul of any of their regulations.

The first place to start with this story is by looking at what an NFT is and why it should matter. NFT is an acronym for Non-Fungible Token, with ‘non-fungible’ essentially meaning that it is unique and therefore cannot be replaced with something else. It is a similar idea to trading cards of old, with the difference here being that they are digital and one-of-a-kind. You might be able to swap one Bitcoin for another Bitcoin and would essentially be swapping two of the same things, but if you swapped one NFT for another one then you’d have two different things being traded.

Similar to Bitcoin and Dogecoin, Ethereum is a crypto currency platform. The blockchain that is used to verify Ethereum supports NFTs, which store extra information that make them unique. At the moment, using the available technology to buy and sell digital art is all the rage, even if it seems a bit pointless. For example, someone paid $69 million for a digital video created by Beeple that you can view for yourself any time you like. Some people believe that NFTs are the future, others feel like they’re really only for rich people who have more money than sense.

How Sorare Are Using NFTs

Whilst it would be untrue to suggest that NFTs have made it into the mainstream, we have seen big brands like Marvel and celebrities such as Wayne Gretzky launch their own Non-Fungible Tokens that seem to be aimed at the collectors market. There have also been attempts to links NFTs to the real-world, such as the manner in which Nike has patented a method of verifying the authenticity of trainers using the technology, called CryptoKicks, but they are mostly just digital representations of real things.

This, of course, includes footballers, which is where Sorare has made an entrance in to the marketplace. Given that we live in a world in which people are willing to spend hundreds of thousands of pounds buying a digital pet rock, it’s hardly surprising that digitalised images of real footballers are suddenly worth a large amount of money. This is even more the case when you consider that real footballers are involved in Sorare, adding a legitimacy that some other forms of NFT simply can’t boast.

The website has partnered with some of the biggest clubs on the planet, including Liverpool, Juventus and Real Madrid. With 200 licensed clubs on board at the time of writing and more joining at every moment, Sorare have made it extremely difficult for other companies to enter the market in the future, given that they will lack the credibility that Sorare can boast. Sorare is able to fuse together football and the fantasy football equivalent with NFTs to make an interactive and collectible experience. 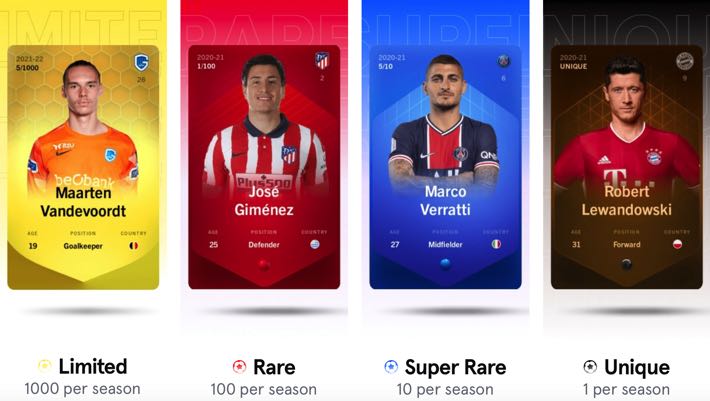 In 2019, the fantasy sports market as a whole was believed to be worth $18.6 billion, with a projection that it will grow to nearly $50 billion by 2027. Anyone that has ever played the Premier League’s official Fantasy Football game will know both how it works and how addictive it can be. You choose the players that will make up your line-up, earning points for the players’ performance on the pitch. The more points that you earn, the higher up the overall league or individual mini-league, which is usually made up of friends, you’ll climb.

Sorare takes the basis of that but puts a twist on it, getting players to purchase digital trading cards that have been tokenised by the Ethereum blockchain. The Non-Fungible Tokens that the players buy are owned by them, meaning that they can see them as crypto-collectibles if they wish to. Those that keep hold of their NFTs will earn points for them in much the same way as they would do when playing a normal fantasy football game, with points providing them with the chance of winning prizes.

The prizes offered by Sorare include crypto currency amounts as well as rare NFTs that have significant value. The weekly aim is still to build-up the best fantasy team that you can, with the on-pitch stats achieved by the real-life footballers translating into in-game points. The more points you earn, the higher up the table you will climb and the more likely it will be that you’ll win prizes. You can join a wealth of different leagues, including regional ones and ones that are specifically aimed at newcomers and rookies to the world of NFTs.

If you want to get involved with Sorare but don’t want to spend any money, you’re able to do so thanks to the ‘common’ player cards that are on offer. These have no real-world value and you can’t sell them, but you can use them in your fantasy leagues and earn points from them. Once you’ve got the hang of it, you can look to the Marketplace in order to buy cards, either newly released ones or else from someone else that has chosen to sell their card, usually for far more than they paid for it in the first place.

What the UKGC Thinks About It

As Sorare began to increase in popularity, the company soon came to the attention of the United Kingdom Gambling Commission. Given that someone in 2019 paid nearly $290,000 for an NFT of Cristiano Ronaldo on the platform, it is hardly surprising that the UKGC decided it should have a look at what Sorare was up to. In 2021, the company launched a Series A funding round and raised $50 million, raising $680 million for its Series B round later in the month. In other words, it is big business.

At the start of October 2021, the Gambling Commission released a statement confirming that Sorare had been brought to its attention. The UKGC was clear that the company is not licensed by it, meaning that consumers should ‘consider’ whether or not to interact with it. The statement said, “The Gambling Commission is currently carrying out enquiries into the company to establish whether Sorare.com requires an operating licence or whether the services it provides do not constitute gambling.”

Within the statement, the UKGC made the point that ‘any activity completed on the site’ would be outside of its jurisdiction and would not come under the regulations that a ‘licensed operator’ would be expected to comply with. As a result, anyone that has any issues with Sorare cannot turn to the Gambling Commission for help in bringing the company to justice in the same way as they would be able to with a betting site that had refused to pay out on a winning bet, for example. This helps to explain the organisation’s wariness of Sorare.

In response to the news that the UKGC would be investigating it, Sorare issued a reply that said that it was ‘confident’ that what it offered could not be considered as gambling. The company pointed to the fact that there was ‘no randomised mechanism’ in play when people purchase cards, meaning that they are different to Loot Boxes that the Gambling Commission has had a problem with in the past. The company, which was founded in Paris, wants to become the ‘leading fantasy football platform for the NFT collectables generation’.

It is with this in mind that Sorare is determined to fight the UKGC’s moves to regulate it. The reality, according to Sorare, is that there is no fixed-odds outcome to to its fantasy football platform, with the prizes instead by issued by Sorare rather than via a betting pool. The company statement said:

We are very confident Sorare does not offer any forms of regulated gambling. This has been confirmed by expert legal opinions at every stage since the company was founded, including during a number of fundraising rounds. We will always engage and have an open dialogue with authorities who reach out to us to learn more about our game. We believe this is the responsible way to grow our game and community globally.

The company was quick to point out that it understands why the Gambling Commission has shown an interest in its operation, saying, “When a product with a nascent technology becomes successful, such as Sorare’s digital collectable cards and game, it is normal and expected for there to be regulatory questions.” For their own part, the UKGC is wary of what Sorare is doing in the wake of the body’s failure to correctly identify the problems with Football Index, which collapsed when owing millions to customers.

As to the question of whether or not it is gambling, that perhaps needs to be looked at in two different ways. There doesn’t seem to be anything about the Sorare business model that suggests that it is equatable to something like Football Index, which asked people to buy ‘shares’ in players, owing to the fact that those that use Sorare purchase an actual, verifiable digital token that is registered on the Ethereum blockchain. In a literal sense, therefore, it would be difficult to argue that it is gambling in any real way.

On the other hand, there is something of an inherent gamble involved in buying a Non-Fungible Token and believing that it will hold its value. Whilst there is technically nothing different to owning an NFT that someone else can have a copy of when compared with owning, say, the Mona Lisa and someone having a reproduction of it at home, it is a market that not everyone understands. Is it a bubble that is waiting to burst, or is there something more tangible to it? Either way, it might be a gamble but it is not one that the Gambling Commission is likely to have anything to do with.