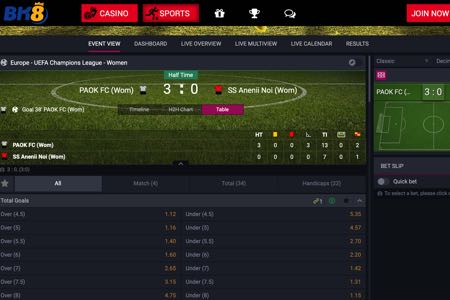 Football clubs taking on sponsorship deals is nothing new, with Coventry City being the first team to agree a shirt sponsorship deal with Talbot in 1974. Even being sponsored by a gambling company isn’t particularly big news, given that eight of the 20 Premier League clubs had a gambling logo on the front of their shirts at the start of the 2021-2022 campaign, which was actually down on previous seasons.

On the one hand, then, the fact that BK8 agreed a deal to sponsor Norwich City in 2021 wasn’t that big a story. There was some grumbling from members of the Canaries’ fanbase initially, which quickly became a furore when it was discovered that the company used adverts that did not chime with the club’s image. The likes of ‘sexy baccarat’ was promoted to Malaysian customers, leading to Norwich City terminating the contract.

BK8 is an online gambling company that was founded in 2014. The business’ headquarters are in Malta, though they also have offices in the likes of Curacao, Cambodia and the Philippines. They aim their services at users in Asia, but they support more than five languages on their site and agreed a deal in 2018 to sponsor five clubs in La Liga, the top-flight football league in Spain.

The company has followed a similar path to other gambling sites, moving to get its name known by agreeing to sponsorship deals. The company is actually a white label site belonging to ProgressPlay, offering users the likes of sports betting and casino products. BK8 made an attempt to stand out from the crowd by offering the use of cryptocurrencies for payment, attracting customers that are likely to use such a method.

The company’s website announced, “BK8 is an online casino in Asia where you can get a whole lot of bang for your dough. It operates in Malaysia, Indonesia, Thailand, and Vietnam, among other countries.” Because online gambling is illegal in the countries mentioned, BK8 wasn’t allowed to be based there and instead set up shop in Malta. More worrying for Norwich fans was the fact that they appeared to be less than open and honest.

BK8 is owned and operated by ProgressPlay, which is a small company that had half a million Euros of debt and made just €15,000 in profit in 2020. That company is owned by Godric Investments Limited, which is based in the British Virgin Islands and operates as a tax haven. ProgressPlay was licensed by the United Kingdom Gambling Commission, perhaps suggesting that not enough due diligence is done by the gambling industry’s chief body when issuing licences to companies.

The deal with La Liga clubs saw them become the official Asian betting partner of Valencia, Athletic Bilbao, Villarreal, RCD Mallorca and Elche. That deal came after seven La Liga clubs were forced to end sponsorship arrangements with other gambling firms, limiting La Liga sides to deals with overseas betting organisations. The following year, John Terry was announced as a brand ambassador for the company.

A year on and BK8 confirmed that Robin van Persie was to be their new brand ambassador, using the former Manchester United and Arsenal forward in publicity and marketing campaigns. The company has also sponsored the Malaysia KPL 5v5 Online Tournament, an eSports tournament that was used in an effort to bridge the gap in the Malaysian and Chinese eSports communities.

The Deal with Norwich City 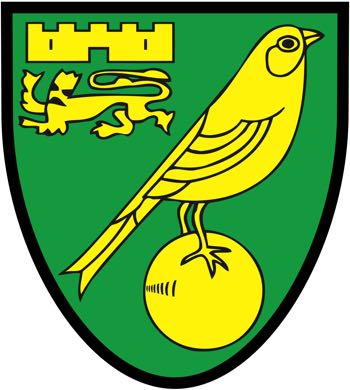 The vast majority of Asian gambling companies that agree sponsorship deals with Premier League clubs do so not because they’re targeting the British market, but rather because they want to use the fact that the English top-flight is so popular in Asia to get their name recognised there. Norwich City announced a deal with BK8 on the seventh of June 2021, saying that they had become the club’s ‘principal partner’.

The insurance company Aviva had been Norwich City’s main shirt sponsor for nine seasons prior 2017, at which point the Canaries made the jump to having gambling companies sponsor them from that point onwards. That began with a deal that saw LeoVegas’ name appear on the front of their shirts for two years before Dafabet took over for the following two years, including their promotion back to the English top-flight.

The deal seemed to be a good one for both parties, given that BK8 had agreed to move away from the standard blue and orange of their logo and instead would use two tones of green to better fit in with Norwich City’s kit. Speaking about the deal at the time, Norwich’s Chief Operating Officer, Ben Kensell, had the following to say:

BK8 will undoubtedly be a new brand for City fans, however, they’re a well trusted name across Asia. The Premier League has an accumulative TV audience of over three billion and is broadcast into over a billion homes – a huge proportion of these Premier League fans are based in Asia. Supporting BK8 in marketing to this global Premier League fanbase equally affords us as a club the opportunity to further our own exposure and commercial efforts into those markets.

Kensell didn’t shy away from the problems around gambling in football, saying that both Norwich City and BK8 were ‘committed to supporting the ongoing review into betting and sports sponsorship’. He also said that the Canaries were committed to adhering to their own code of conduct, as well as the guidelines put in place by the Betting & Gaming Council around marketing campaigns with gambling companies.

Where It Started Going Wrong

No sooner had Norwich City made the announcement about their deal with BK8 did fans of the club begin to take issue with it. Initially the complaints were mainly around the fact that it was another gambling company, given the extent to which the links between gambling and football had been in the news so much in the months and years prior to the deal bring signed. Then supporters found BK8’s social media accounts…

BK8 repeatedly used sexually provocative images across their social media platforms in order to promote their services, including simulating sex acts with sausages. The company apologised for the material, saying that it ‘did not align with the wider vision and values’ of the football club. Not long after the material was discovered on social media, such as the firm’s YouTube channel, it was made private and then taken down.

The trouble for Norwich City’s new partners didn’t stop there, however. An account that reportedly belonged to a BK8 ‘ambassador’ that boasted more than a quarter of a million followers was found to have direct links to hardcore pornography by the Athletic. Other clips from an influencer involved having young women in underwear cover their breasts by placing BK8 stickers over them. 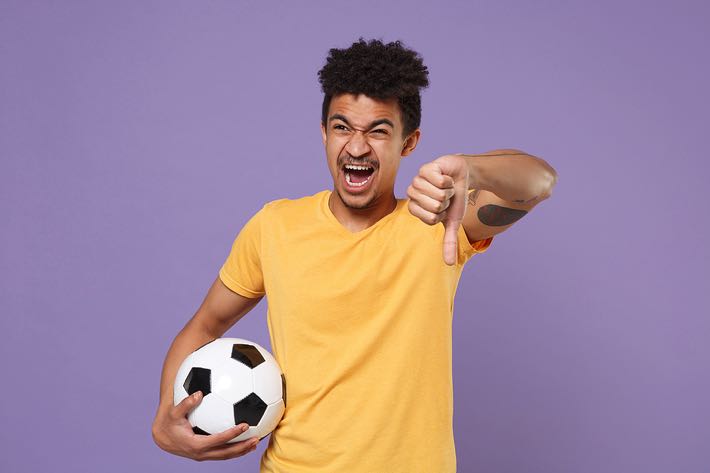 Not long after the various videos and marketing campaigns were discovered, the football club began to come under pressure over its decision to allow a sponsorship deal with BK8 to be signed. Sarah Greaves, a board member of the Canaries Trust, told the Athletic,

There is no way my teenage daughter will be in one of those shirts next season. I hope none of my children Google that firm online and see images I wouldn’t want them to see, especially associated with a football club they adore.

The club released a statement saying that they were aware of a series of posts across social media accounts that ‘do not align with the wider Norwich City vision and values’. It came as the club was preparing to get its Premier League campaign underway, having returned to the English top-flight by finishing top of the Championship by five points, yet some at the club weren’t overly committed to backing away from the company.

Ben Tunnell, the Head of Commercial Development for Norwich City, pointed to the fact that the club had signed a lucrative deal with BK8 and that that was one of the most important things. He said,

We’re aware of some of the concerns that supporters may have regarding betting companies sponsoring football clubs. But as a self-funded club, we have to do all we can to support the efforts on the pitch by generating as much revenue as possible.

The Deal Gets Cancelled

It didn’t take long before Norwich City began to panic about the information being discovered about BK8. The Advertising Standards Authority’s code of conduct is clear about the fact that advertising cannot ‘link gambling to seduction, sexual success or enhanced attractiveness’. The same rules do not apply in Asia, where BK8’s site offered the likes of ‘Sexy Baccarat’ to entice users.

Whilst it was clear that such images wouldn’t be used in British marketing and therefore fall foul of the ASA’s standards, it was another reason why the hierarchy at the Canaries began to fear a backlash. It took just three days for the club to announce that they would not be carrying on with the sponsorship deal, which would have been worth £5 million to them over the course of the one-year agreement.

When a collective of Norwich City supporter groups posted a video to social media alongside the hashtag ‘#HerGameToo’ that denounced the deal, bosses at the club realised that they had to act. The club released an announcement confirming that the deal had been cancelled ‘with immediate effect’, saying,

As a club, we’re proud of our place within the local community and our relationship with supporters around the world. We have worked tirelessly for a considerable time building relationships across a wide range of mediums and community projects.

The also mentioned that an adverse reaction to a betting company as a sponsor had been anticipated, but that the ‘ways of marketing’ employed by BK8 did not align with the values of the football club. They summed it up by saying, “On this occasion, we got it wrong. For that, and any offence caused, the club apologises.” The fact that the company also boasts an obscure financial structure rang some alarm bells for certain sections of the Norwich City supporter base too.

A New Sponsor Is Brought on Board 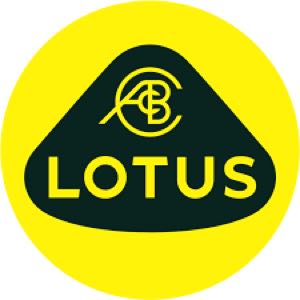 With only weeks left before the Premier League season got underway, Norwich City found themselves in a position where the club needed to find a new sponsor relatively quickly in order to fill the hole that would be left by the cancellation of the deal with BK8. In searching for a new company to sponsor them, they didn’t have to look too far thanks to the presence of the car manufacturer Lotus in Norfolk.

Lotus already had a relationship with Norwich City, having sponsored the club’s away shift between 2003 and 2006, as well as being the sponsors of the training centre and the academy. The deal resulted in the car makers also having their logo on the men’s team and the women’s team’s shirts. Kensell reiterating the importance of the values of both club and sponsor, saying, “Norwich City and Lotus are two iconic Norfolk brands, who are very much aligned in their wider visions and values. This is the perfect next step in our relationship.”

Previous Post: « Premier League Golf: New Breakaway League to Launch in 2021
Next Post: The Woman Who Shared the Lottery Jackpot With Herself »