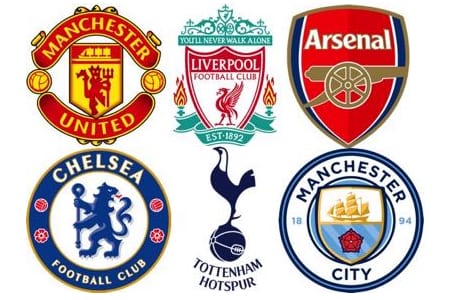 There have always been some clubs that have dominated English football, with Liverpool doing so in the 1970s and 1980s before Manchester United took over the mantle in the 1990s. The arrival of Roman Abramovich at Chelsea in the mid-2000s and then Sheikh Mansour at Manchester City in the 2010s saw the power in the English top-flight shift around from season to season, but still certain clubs tended to dominate.

When the Champions League became the most important competition in Europe, the ‘Top Four’ of the Premier League were the most important clubs because those positions qualified for the tournament. That shifted to become a ‘Big Six’ during the 2010s and into the 2020s, with those clubs being involved in the ill-fated European Super League debacle. Who are those clubs, though, and why do they wield such power?

The Emergence of the Top Four

Between 2000 and 2010, clubs needed to finish in the top four of the Premier League in order to be able to play in the Champions League the following season. The richer and more successful clubs tended to dominate these positions, with Liverpool, Arsenal, Chelsea and Manchester United soon earning the nickname of the ‘Top Four’. Indeed, only four other clubs managed to finish in the top for during the decade in question.

Leeds United were the first to so at the end of the 1999-2000 season, with Newcastle United pulling it off in both the 2001-2002 and the 2002-2003 campaigns. Everton finished above Merseyside neighbours Liverpool in 2004-2005, only for the Red half of Merseyside to win the Champions League that season and overshadow them. Then Tottenham Hotspur finished in the top four in the 2009-2010 season, foreshadowing what was to come.

The dominance of the ‘Top Four’ wasn’t just being felt in England, with at least one of the clubs reaching the quarter-finals of the Champions League every year between 2005 and 2012, with seven of the eight finals during that time featuring one of the sides. The so-called ‘Top Four’ were the only teams to reach that stage from England, with Liverpool winning Europe’s top competition in 2005, Manchester United doing so in 2008 and Chelsea achieving it in 2012.

It shows just how dominant the Top Four were in the Premier League that by the conclusion of the 2018-2019 season, which was the 27th campaign in the top-flight since its relaunch, the four teams remained in the top four positions in the all-time Premier League points total. Liverpool were fourth, but were still 250 points clear of Tottenham Hotspur in fifth position.

The Emergence of the Big Six

During the 2010s, the previously solid ‘Top Four’ began to be broken up by the success of Tottenham Hotspur and Manchester City. The latter only really stepped up to the plate in the wake of the club being taken over by Sheikh Mansour Bin Zayed Al Nahyan and the Abu Dhabi United Group. Having finished ninth in the Premier League the season before and gone 32 years without a trophy, they began enjoyed immense success.

Suddenly, there weren’t four teams aiming to finish in four places with occasional sides looking to disrupt their success, but rather six teams fighting it out over four places that would allow them to play in European premier competition. All of the teams apart from Manchester City suffered at least one season outside the top four, including Arsenal, who came fifth in 2016-2017 and failed to end the campaign in the top four for the first time in 21 attempts.

The idea of a set of clubs being dominant is, ultimately, always about more than what they’re able to produce on the football pitch. In the end, money rules the world and that is just as true in football as it is in any other walk of life. The extent to which the Big Six were dominant over their Premier League counterparts in a financial sense was made clear with the publication of the Deloitte Football Money League for the 2016-2017 season.

Each of the Big Six clubs had revenues that exceeded €350 million, with Manchester United leading the way. The Red Devils’ revenue sat at €676.3 million, which was nearly three times the revenue of Leicester City. The Foxes were the club closest to the Big Six, but their revenue of €271.1 million, which was helped by their title win and their participation in the Champions League, was still some way off sixth-placed Tottenham’s €355.6 million.

Writer Paul Tomkins did work to show the fact that the amount of money spent by a club on both its wage bill and the acquisition of players almost always reflected their league position at the end of the season. Though you can’t literally ‘buy success’, the more money you spend, the more chance there is that you’ll win something or, in the case of the Big Six, fight it out for the top four places in the Premier League.

How Dominant Have They Been?

At the time of writing, the 2020-2021 season is reaching its climax. It is extremely likely that Manchester City will win the Premier League title and their city rivals will finish in second place. At the same time, it’s incredibly unlikely that either Arsenal or Tottenham Hotspur will finish in the top four, whilst Chelsea and Liverpool both have an outside chance of making it into the all-important Champions League places.

With that in mind, it’s worth having a look at just how dominant the Big Six have been in the Premier League since the emergence of them as a group in 2010. Here’s a look at the English top-flight title winners since then, including whether or not they are considered to be a member of the Big Six:

Just one team has won the title and not been a member of the Big Six, which was Leicester City at the end of the 2015-2016 season. That means a mere 9.09% of titles have been won by a none Big Six team since the emergence of the Big Six and it happened at odds of 5,000/1. It’s fair to say, then, that the Big Six has been thoroughly dominant in terms of title wins during the period they’ve been around.

If you extend this to include the teams that finished in the second, third and fourth spots during the same time period then you’ll get the following:

Not only were Leicester City the only none Top Six side to win the Premier League after the emergence of the Big Six, they were also the only team to finish in the top four during the same period. That means that just 2.27% of the available Champions League places between the 2009-2010 season and the 2019-2020 campaign were occupied by a team from outside of the Big Six.

In April of 2021, the Big Six clubs in England announced their intention to breakaway from UEFA’s Champions League format in order to join what was being called a Super League. They joined up with Internazionale, Atletico Madrid, Barcelona, Real Madrid, AC Milan and Juventus in order to create the league, which immediately gained opposition from football supporters around Europe.

The main objections of supporters was that it would be a ‘closed league’, meaning that the clubs involved in it couldn’t be relegated from it and there were limited spaces for teams outside of the fifteen founder members to be involved. This, said critics, removed the integrity of domestic league competitions, given that they didn’t need to qualify for the new so-called Super League through their league performance.

For the Premier League, the question about what to do to the Big Six clubs that were initially part of the Super League before backing out of it became the primary focus. On the one hand, there was a feeling that the clubs should be punished somehow. Yet on the other hand there’s no denying that the Big Six are the main reason why the Premier League is as popular as it is globally, meaning punishing them would have been akin to cutting off their nose to spite their face.

There has long been anger and annoyance from teams outside of the Big Six that they have dominated the Premier League, so this attempt to make a move for more power, influence and money was seen as the potential death-knell of England’s top-flight division. Whilst the remaining 14 clubs were annoyed at the Big Six, there was also an acceptance that the Premier League product would be significantly worse without them.

What Next for the Big Six?

One of the joys of the Premier League is that it is an ever-changing landscape, with new teams coming to the fore every now and then. More to the point, some of the bigger clubs sometimes fall away from the top of the pile and are replaced by ones that are unexpected. In February of 2020, for example, Arsenal sat in 10th place in the top-flight and Manchester United were below newly promoted Sheffield United.

The Top Four switching to become the Big Six showed that the strength of the teams at the top is malleable, so it’s possible that the 2020s will see more clubs climb into the upper echelons of the Premier League. Leicester City have shown that they have the ability to ask questions of the Big Six, whilst teams like Wolverhampton Wanderers are well-placed to push for a space in the top six sports.

In the Premier League era, no team has won the title more than three times in succession, which marks it out as different from the likes of the Bundesliga in Germany and France’s Ligue 1. It’s unlikely that this will change, even with the money being spent by Manchester City in the search for footballing dominance. Instead, might the future introduce us to the Envious Eight, or even reduce us to the Topping Two?

Previous Post: « European Super League: The Breakaway Tournament That Fell Flat on Its Face
Next Post: What Are Bounty Tournaments in Poker? »