Elsewhere on the site, you can read about crypto currency and whether or not buying it is considered to be gambling or investing. Here, we’re looking more specifically at the growing influence that crypto currency has on football. It is worth taking about because it is happening at a time when gambling sponsorship is under intense scrutiny, even to the extent that it is dropping a little. With that in mind, is the increase in crypto currency sponsorships just a sign that football is swapping one form of gambling for another?

Obviously a lot of that depends on whether you would consider buying crypto currency to be a form of gambling. Regardless of your stance, there’s no question that the world of crypto is a volatile one. You could invest every penny that you have in a well-respected crypto currency only to lose every penny. It is certainly not something that people should be widely encouraged to take part in without at least a passing reference to the possibility of losing their money, which crypto firms are understandably reluctant to engage in and would surely discourage clubs from flagging up. 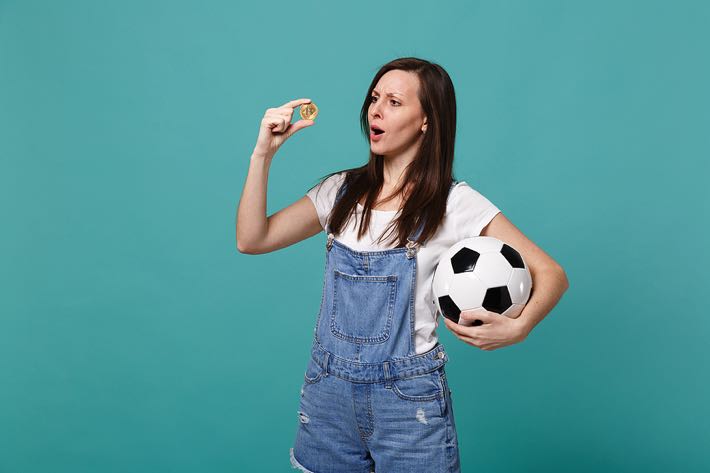 When Lionel Messi signed for Paris Saint-Germain, ending his career-long association with Barcelona, part of his signing-on fee was paid in fan tokens. Though the exact amount of his contract that was paid with the crypto currency wasn’t revealed, it was declared to be a ‘significant’ amount. Fan tokens are not a crypto currency in the same way that, say, Bitcoin can be considered to be, but they entitle the holder to vote on minor issues to do with the club. It was a fascinating moment for football and crypto currency alike, giving the latter a previous unheard of legitimacy.

Rewind several years and football clubs would have had little-to-nothing to do with crypto currencies. Even ahead of the 2020-2021 campaign, no Premier League clubs had a main sponsor that was a crypto currency. What is noteworthy, however, is how many clubs have agreed a sponsorship deal in at least some form or another with a crypto currency. Here’s a look at the sponsors of each club over the past five seasons to give us a sense off when crypto currency began to creep into the mainstream:

The 2017-2018 season was the first in which Premier League clubs were allowed shirt sleeve sponsors. This gave clubs the chance to make additional money, but what sort of companies did those that took up the opportunity go into business with? Here’s a look at whether or not they had crypto currency or gambling sponsors:

Whilst none of the Premier League clubs in the 2017-2018 campaign had an agreement with a crypto currency firm, 11 of the 20 had at least some sponsorship from a gambling company.

By the time the 2018-2019 season got underway, Premier League clubs had got used to the idea of additional sponsorship deals. Even so, some clubs still didn’t have one, partially because of deals with their main sponsor. Here’s how many had agreements with crypto currency or gambling firms:

There was a drop off of one team to have a gambling sponsor for the 2018-2019 season, with 10 out of the 20 sides in the Premier League boasting one. More interestingly, however, is the arrival of CoinDeal, a crypto currency exchange platform, as a shirt sponsor for Wolverhampton Wanderers.

Having seen the arrival of a crypto currency sponsor the year before, did the 2019-2020 campaign see an increase on that front?

There remained ten clubs with at least some sponsorship from a betting company in the 2019-2020 season, but it’s the increase in crypto sponsors to three that is most interesting for this article. Newcastle United and Watford joined Wolverhampton Wanderers in having a sponsor that was at least tangentially related to crypto currencies.

Now that we’ve seen crypto currency companies getting involved with Premier League teams for two seasons in a row, will we see a further increase for the 2020-2021 campaign?

Interestingly, none of the clubs that had previously had deals with crypto currency related companies maintained them for the 2020-2021 season, though Crystal Palace did take one out with one that promised a way of promoting fan engagement. Ten of the 20 clubs still had some form of gambling sponsor.

The thing that is worth noting about football clubs is that many of them have additional sponsorship agreements in place with various companies. Though neither Arsenal’s main shirt sponsor nor their sleeve sponsor are companies with links to crypto currencies for example, they do have a deal with socios, which is a crypto business of sorts. Here’s how the main sponsors shook out for 2021-2022:

Though there were only nine clubs with a gambling related sponsor at the start of the 2021-2022 season, it could have been different if Norwich City hadn’t decided to cancel an agreement in place with BK8 Sports. Meanwhile, four sides had a crypto-related sponsor, depending on your flexibility regarding what that means, exactly.

Whichever way you cut it, you can see the crypto-related sponsorship deals start to creep in to the Premier League with each passing year. In order to demonstrate that more clearly, here’s a look at the five seasons above but specifically limiting it to how many gambling sponsors there were versus how many crypto sponsors:

Whilst crypto currencies haven’t quite taken over in terms of the main sponsors of clubs, it is nevertheless interesting to see that they’re starting to be a going concern. We’ve allowed a degree of liberty to be taken in terms of what classes as a crypto currency sponsor. Facebank, for example, isn’t an out and out crypto in the same way that something like Bitcoin is, but it did move into the world of crypto in 2019. Equally, bitci is a cryptocurrency trading platform, but they both have close enough links to make it valid.

One of the things that has started to happen across more and more clubs in recent times is the use of partnerships. It can be used as something of a joke from rival club supporters when a team has something like an ‘official noodle partner’, for example, but this is a way of bringing more money into a club that can be spent on developing infrastructure or signing new players. As a result, the vast majority of football clubs have a number of trading partners in addition to their official shirt and sleeve sponsors.

This is where crypto-based companies are starting to creep into working with football clubs. During the 2021-2022 season, the following clubs had deals with companies that were either operating explicitly as crypto currencies or else were tangentially linked to the world of crypto:

All six of the teams that have extra deals in place with crypto companies are ones that do not have a crypto currency as either their main sponsor or else their sleeve sponsor. As a result, it would be fair to say that ten teams had such deals in place for the 2021-2022 season. You’ll note that the main link to the world of crypto comes via Socios, which is the company behind the payment to Lionel Messi at Paris Saint-Germain. Socios is one of the main ways that football and crypto currencies are being linked in the modern era.

In simplistic terms, Socios sells ‘fan tokens’ for football clubs. Those with fan tokens can have an influence over decisions made by the club on small matters, such as the music that is played at half-time or the design of the entrance tunnel. At the time of writing, 37 different football teams have signed up to work with Socios, including big hitters such as Barcelona, Juventus and AC Milan. It is effectively a way of monetising a supporter’s belief in the club and desire to be a part of it, though it’s not without its critics.

There is, perhaps, no better example of the manner in which crypto currency has began to earn a place at the big boy’s table in the world of football than Watford. In 2019, the London club agreed a deal with Bitcoin to have the company’s logo appear on the sleeve of their shirts. That was in agreement with Sportsbet.io, which was the club’s main sponsor and allowed the use of Bitcoin to pay for things on its betting website. It was also possible for supporters to pay for things, including hospitality boxes, using Bitcoin.

Ahead of the 2021-2022 season, Watford agreed a sponsorship deal with Stake, an online betting company. The deal was paid for using cryptocurrency, though the exact one that was used has not been confirmed. The club’s Chairman, Scott Duxbury, announced that it was an ‘exciting campaign’ for the club, which had been ‘ambitious’ in its outlook and its ‘commitment to innovation’. Quite whether other clubs will follow suit and allow sponsors to pay their way using cryptocurrencies in the future very much remains to be seen.

It is more than likely that the crypto currency that was used to pay for the sponsorship was Dogecoin, which also took on sponsorship duties for Watford when they returned to the Premier League for the 2021-2022 campaign. Sleeve sponsors are not allowed in the Championship but are positively encouraged in the top-flight, so Watford wasted no time in signing up for a sponsorship deal with another crypto company. Given that Bitcoin had been the club’s sponsor the last time they were in the Premier League, isn’t a sign that they’re a club ahead of the curve when it comes to crypto.

The question is, of course, will other clubs follow Watford’s lead, or will they prove to be the outlier? A lot may well depend on the success of the crypto deals that they’ve put in place, but with more and more teams signing up to the Socios model, it certainly appears as if football’s relationship with crypto currencies and the platforms that sell them is only going one way. The government’s relationship with gambling companies sponsoring football is frosting over, so are we now seeing one form of gambling being replaced with another?

Previous Post: « A Really Simple Guide to Formula One: How Do F1 Races Work?
Next Post: There’s a New Crypto NFT Fantasy Football League, But Is It Gambling? »