For poker lovers, the acronym of WSOP is self-explanatory. It stands for the World Series of Poker and is one of the competitions in the game that all players would absolutely love to win. Though it is thought of by many as being quite a modern tournament, thanks largely to its renaissance in the era of televised poker, it actually started as an invitation-only event in 1970.

The brainchild of Las Vegas guru Benny Binion, it has grown from relatively humble beginnings to become one of the most popular poker tournaments in the world. Indeed, just six players took part in it in its inaugural year, but by the mid 2000s, it had as many as 8,000 people involved. Every poker player would love to win the jackpot, yes, but also to get to take home a coveted WSOP champion bracelet.

In the 1970s, poker was not a popular card game in Las Vegas. That might seem hard to believe now, but when Benny Binion came up with the idea of an invitational poker competition, there were just 50 or so tables on the entire Las Vegas strip. In fact, the entire state of Nevada boasted a mere 70 tables, which barely seems comprehensible to the modern, poker-savvy audience that knows the game even if they don’t play it.

The names of Tom Moore and Vic Vickrey are closely associated with the success of the World Series of Poker, with the former being a Texan who part-owner the Holiday Casino in Reno. Vickrey, meanwhile, was something of a gambling insider and a dreamer, having big ideas and a vision to make them a reality. In 1969, they combined forces to invite well-known poker players to Reno for what was called the ‘Texas Gamblers Reunion’.

The aim was for that to be the first such event, though it actually ended up being the only one. High-stakes cash games were spread out over a number of days, with names such as Jimmy “The Greek” Snyder and Rudy “Minnesota Fats” Wanderone getting in on the action. Another player that was there with them was Benny Binion himself, who was quick to pounce on the idea when Vickrey and Moore declined the following year.

It Wasn’t an Instant Hit

The truth about the World Series of Poker is that it wasn’t an instant hit. The tournament remained an invitational one during the first year of being hosted at Binion’s Horseshoe Casino. The fact that the venue didn’t even have a poker room meant that a handful of players were crammed into an alcove not much bigger than a Las Vegas hotel bedroom, which was a remarkably unspectacular way for history to be made.

There was little press coverage of the event, with few people outside of Las Vegas even knowing that it was taking place, much less cared about the result. After several days of high-stakes games, the players had a vote on the person that they thought was the ‘best all-round player’, which meant that Johnny Moss was declared the champion without actually having to win a poker tournament.

Having labelled his competition the ‘World Series of Poker’, Binion realised that he’d have to make some dramatic changes if he were to ensure that it began living up to its name. The following year, seven players had to pay $5,000 to enter, with Johnny Moss retaining his title and going home with the winner-takes-all prize that was on offer. It was the following year when things became interesting, however.

Its Popularity Starts to Grow

There were nearly double the entrants for the following year’s World Series of Poker, when “Amarillo Slim” Preston caused a shock when he won. It wasn’t the win that made a difference for the tournament so much as the fact that Preston was excellent at banging his own drum. The Texan earned himself a huge amount of publicity around the country, even being invited onto the Tonight Show as a guest.

Peston’s success was enough to encourage CBS Sports to broadcast the event the following year. Whilst the fashion might not stand up in a modern-day casino, the play was just as thrilling as we’ve come to expect and Puggy Pearson ended up as the winner. The event also got an expansion, with four preliminary events being played and a lower buy-in to the Main Event encouraging more participants.

Though the winner changed hands a couple of times, the event remained much the same until the decision was taken to split the Main Event prize money for the 1978 competition. The top five finishers were all on the receiving end of a cash payout, with changes also coming in the form of Barbara Freer being the first woman to take part in the World Series of Poker, thereby breaking up the male-dominated game.

Perhaps the biggest influence on the future of the World Series of Poker came about in 1979. Hal Fowler had entered the competition as an amateur player and wasn’t given much hope by the poker elite. The professionals had to eat their playing cards when Fowler won, however, ensuring an increase in the number of amateurs entering in the years that followed his victory.

In spite of Fowler’s win and Freer’s entry, the World Series of Poker remained somewhat niche. It wasn’t until Stu “The Kid” Ungar entered the fray in 1980 that things began to take a turn towards the mainstream. The New Yorker was different in virtually every way when compared to the previous WSOP crowd, which was mostly made up of Texans who enjoyed sharing the prize money around each other.

His personality was such that NBC Sports sent a film crew to the 1981 World Series of Poker, where he won again and introduced poker into millions of homes around the United States of America. By the following year, there were 11 preliminary events being played in order to cope with the influx of new players, whilst a Ladies World Championship was also added to the experience. The buy-in for the Main Event had increased to $10,000.

As the 1980s wore on, Benny Binion handed over the running of the Horseshoe Casino to his son, Jack. He also had a protege called Eric Drache, who was the tournament director and the person who came up with the idea of satellite events. These events gave normal poker players the chance to earn a place at the Main Event, becoming incredibly popular and allowed the WSOP to grow in both size and importance.

In the years that followed, the World Series of Poker became a global event, with the number of participants meaning that the Horseshoe Casino alone wasn’t big enough to cope with hosting it. Nearby casinos, such as the Golden Nugget and the Four Queens, had to host tables, with the Horseshoe not opening a poker room until it bought the Mint Casino next door and finally had the space to do so.

When Benny Binion died on Christmas Day in 1989, the torch of the World Series of Poker was officially passed to Jack. He knew that the competition could become even more important, so he brought in power veterans in the form of Jim Albrecht and Jack McClelland to take over the running of things. They ensured that more women and overseas players took part, with Iranian-born Mansour Matloubi winning in 1990.

The Main Event attracted more than 200 players the following year, thanks in no small part to the fact that the WSOP awarded its first $1 million prize. By 1997 it had grown to such an extent that the final was played on a stage on Fremont Street, with the newly installed electric canopy blaring away overhead. Stu Ungar won, joining Johnny Moss as the only players to win the World Series of Poker three times.

Problems in the Binion family saw Jack excluded from the event and top names in the game boycotting it. By the time the new millennium was bedded in, there were plenty suggesting that the tournament had left its best days behind. The launch of the World Poker Tour also put pressure on the event, resulting in fields for the 2003 competition being noticeably smaller than they had for more than a decade.

Just as people were starting to think that WSOP was dead on its feet, Chris Moneymaker won and changed everything. Moneymaker was responsible for arguably the most critical event in the history of the competition, having qualified for the 2003 event courtesy of an online poker site. The fact that he’d done that and that he looked so normal meant that millions of poker players started thinking they could win that way too.

Such was the influence of his win, what happened next is often referred to as the ‘Moneymaker Effect’. The 27-year-old accountant and amateur player defeated 838 other people to win himself a WSOP bracelet, winning a $2.5 million prize and becoming the poster boy for the game in the modern era. That it was all broadcast live on ESPN certainly helped, breathing a new lease of life in the World Series.

The World Series of Poker’s growth was such that other organisations soon became interested in it. The amateur players continued to flock to satellite tournaments, thanks to fellow amateur Greg Raymer winning $5 million the year after Moneymaker and the prize money hitting $7.5 million by 2005. Binion’s Horseshoe Casino was sold off in 2004 and Harrah’s Entertainment bought the rights to the World Series of Poker.

The first thing that Harrah’s did was to move the competition to a more fitting venue, with the huge RIO All-Suites Casino and Hotel becoming its home from 2005 onwards. By the following year, 45 tournaments made up the World Series of Poker, with gold bracelets being awarded to the winners. The tournament might have had humble beginnings, but it had grown to become one of the biggest televised events in the world.

As if to prove the point around the World Series of Poker’s place in the world of sporting entertainment, the 2006 tournament was won by Jamie Gold, who defeated a field of 8,772 other players to claim the top prize. That prize was $12 million, which was more than a person could get for winning all of the Master, the Kentucky Derby and Wimbledon in the same year. It had become huge, with little sign of slowing down.

The Modern World Series of Poker 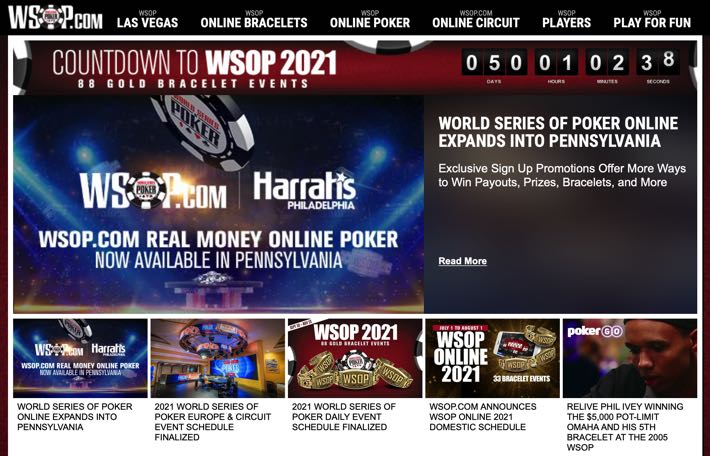 One of the most intelligent moves that the World Series of Poker made was to launch the World Series of Poker Circuit. This saw the event have satellite tournaments in casinos around the United States of America and even Europe, giving people the chance to participate in the Main Event. Whilst some believe that the WSOP might have reached its peak, those that know their history are aware that that sort of thing has been said before.

The fact that you can now play World Series of Poker events in Europe, Africa, the Caribbean and across the Asia Pacific suggests that its popularity isn’t dying down any time soon. In the middle of 2021, news began to leak that the WSOP Main Event will be moved from the RIO to Bally’s and Paris casinos on the Las Vegas strip, meaning that it will likely attract a whole new audience that will learn about its storied history.