Thanks to the likes of the World Series of Poker and the film Rounders, the popularity of poker took off during the early 2000s. When amateur player, Chris Moneymaker, won the WSOP Main Event in 2003, online poker became a hit and people all over the world suddenly started playing No Limits Texas Hold’em online, in casinos and even just in games with friends. That was obviously brilliant for poker, but one of the things that happened is that lots of people that didn’t know the etiquette of the game started playing regularly.

Fast-forward 20 years or so and a lot of the same problems persist. Both newcomers to the game and those that have played it for years online suddenly find themselves on the wrong end of unwritten rules when they sit down at an actual poker table. Indeed, even online there are faux pas that you can make thanks to the existence of the chat box, which some people use in order to try to taunt their opponents by talking about the hand that they’ve been dealt. The question is, is that allowed whilst you’re actually playing a game?

When You Should Keep Your Mouth Shut 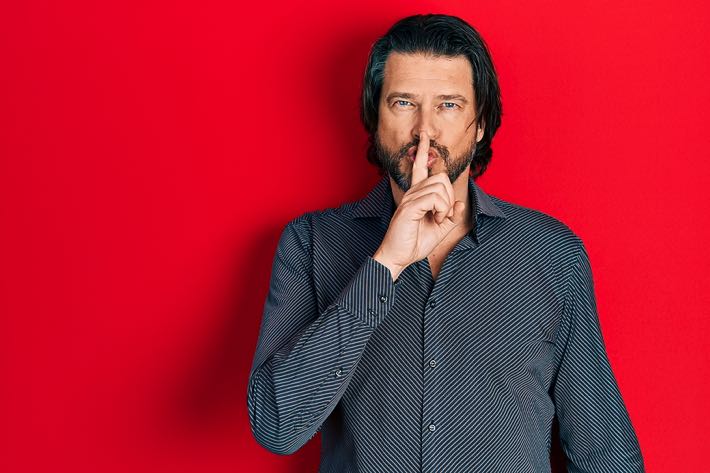 For most people, the whole point of playing poker is to engage in a social game. After all, there is something lovely about sitting down at a table with other people and being able to chat away. Conversation is very much a part of the game that most people enjoy, which helps to elevate it from being a boring experience. Oftentimes, the chat around the poker table will be able anything from religion to sex, via politics and current affairs. Nothing is off the table, no pun intended, provided you’re willing to obey the standard social constructs.

There is, though, one thing that cannot be discussed: the hand that you are currently playing. In some ways, this is just a continuance of the rule that it is ‘one player to a hand’, meaning that each player has to make their own decision about the hand that they’ve been dealt. In essence, the point of the rule is to stop people from changing the direction that the hand would naturally take by giving away crucial information. Pretty much anything that you might say about a hand whilst it’s being played can either help or hurt a player, so the ‘say nothing’ rule applies.

This rule applies not only to the people involved in the hand itself, but also others that are sat at the table. In other words, declaring that you ‘stupidly folded the ace’ once the river has been dealt is just as much of a no-no for those not in the hand as talking about how brilliant the flop was for people that are still playing it. It is the job of the dealer to remind players of this unspoken rule (again, no pun intended), but many fail to do so and players often think that that means that it’s ok to be a chatty Cathy when it really isn’t.

Exceptions to the Golden Rule

It goes without saying that players that like to talk will want to talk about the ongoing hand more than anything else. That isn’t all that surprising, considering the fact that the most interesting topic in the world during a poker game is the hand that is taking place right in front of you. The desire to chat will feel over-whelming to some, but whelmed they must be. There are, though, some exceptions to this rule that are easy enough to understand. There are times, after all, when you absolutely need to talk about the ongoing hand.

Imagine, for example, that your eyesight isn’t the best in the world and you can’t see one of the cards at the far-end of the flop. Given the fact that the nature of this card is available to everyone, it is entirely reasonable to ask what it is. Essentially, if a fact about the hand is something that everyone either should or could know, you’re ok to discuss it. This includes the likes of some poker rules you’re unsure of, such as the minimum raise, or how many chips a player has in their stake when they’ve gone all-in.

There are often things that happen that you might feel a compulsion to speak about, even though it concerns the hand that is being played at that moment. A player might mumble how much they’ve decided to raise things by, say, and you need to ask them to repeat it so you can call or fold accordingly. By the same token, there are sometimes occurrences that need to be either called out or drawn to the attention of the dealer, should they somehow have missed it happening in real time and need to be called out on it.

It isn’t unheard of for players to go out of turn, for example, or for someone to accidentally expose their hand. Someone might declare themselves to be all-in, but you missed the person that said it. Was the ambitious hand-gesture made by another player them checking, or did they just have a twitch? Again, the dealer should deal with most of these things but they don’t always do so, which leaves you with no choice but to talk about the hand that is currently taking place even though that breaks the golden rule.

Some Players Love to Push Boundaries 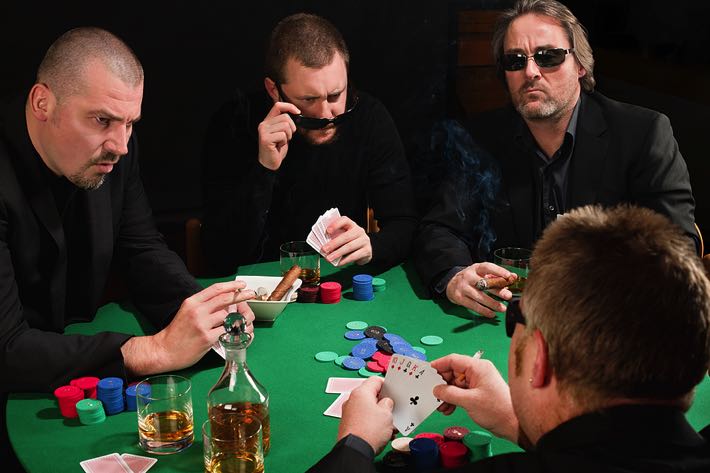 The simple truth of life at the poker table is that some players love to push boundaries. There are all sorts of topics to do with the hand being played that some players will think are ok to mention whilst others will believe that they’re not. When players differ in their opinions of something, it can become a sticky situation very quickly. One person might think that what has been said violates the unwritten rule of not talking about the hand, whilst another might think it’s entirely acceptable and everyone should just chill out.

These nuances can cause issues, especially if the player involved has predominantly played at home where such rule are honoured more than they are strictly observed. If a player loves pushing the boundary of what is acceptable when playing with their mates at home, saying things like “I’ve got top pair” once the hold cards have been dealt, then they might want to engage in the same sort of behaviour at the poker table. If that is you, it is worth bearing in mind that it isn’t the done thing and you might well upset some people you’re playing with.

When It’s Good to Talk

Those of a certain age will remember an advert for British Telecoms starring Bob Hoskins, who told us all that ‘it’s good to talk’. Whilst that might be true when you’re selling the services of a telephony company, it isn’t necessarily true when you’re playing poker. That doesn’t mean that it’s never right to say anything out loud during a poker game, though. For starters, players that are playing tight will want to be chatty for the simple reason that talking a lot suggests that you’re seeing a lot of action, even when you’re not.

Considering the extent to which poker is a game of bluff and counter-bluff, tricking people into thinking you’re being really busy is a great thing to be able to do. Equally, those that are opting for a loose-aggressive strategy will want to chat away in order to stop other players being too resentful of what they’re doing. There are some that opt to be the ‘villain’ of the table, talking trash in an attempt to get under the skin of the others. This should only be done if you know what you’re doing and are good at it.

Examples of Things That Should Go Unsaid 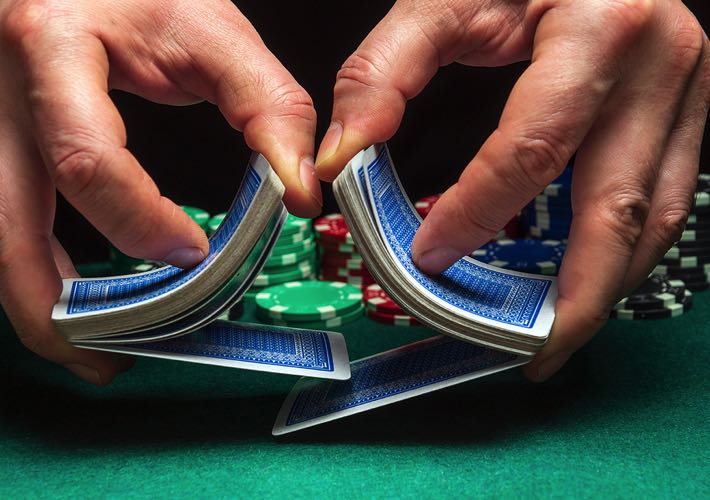 It is entirely possible that you have read all of that and find yourself wondering whether you have said something that would be deemed ‘unacceptable’ by some players in the world of poker. Alternatively, you might be starting out down the road of playing regularly and would like to know how to avoid being in a situation where you end up upsetting other people that are sat around the poker table. Though the following list isn’t exhaustive, it will give you a sense of what you can and can’t say when you’re playing:

The Exasperation at a Folded Hand

Though the example earlier of being annoyed at folding an ace is an obvious one, it is one that can be transposed to any hand. Though you might think you’re not really giving away by exclaiming that this is the one time that you ‘shouldn’t have folded 2-7 off suit’, the player with trip twos wondering whether they might hit quads has just been told something pretty important. Similarly, the player considering a bluff with the two sevens that are on the table knows that they won’t be able to pull it off because you’ve given it away.

Don’t Help Others Grasp What They Might Not Have Realised

Sitting on the sideline and looking at a flop and turn that shows four diamonds, it seems obvious that everyone can see the possible flush. When they both check to the river, your exclamation that one of them ‘must have hit the flush’ might seem innocuous, but you’ve highlighted something that someone might not have realised. The same thing is true if someone overbets or a player becomes pot-committed; exclaiming it for all to hear highlights something for everyone that not all players will necessarily have noticed.

What About Online Poker?

It might seem that being a little too chatty is something that you can only really do in a physical poker room, but that isn’t true. Thanks to the existence of chat facilities in the world of online poker, the same sort of verbal mistakes that you could make in a real-life poker room can also happen in the electronic world. Before typing out that someone betting pre-flop ‘must have a pair’ in their hole cards, consider whether or not you might be flagging something up to the other players in the room that they might not have noticed for themselves.

Just because you know that any ace will almost certainly win it when there are four eights on the table, the same isn’t necessarily true of everyone else involved in the game. Typing that sort of thing into the chat box, or saying it out loud if you’re playing online on a site that has the facility for real-life communicating, is a massive no-no that you really should do your best to avoid. The fact that you’re not physically in the same space as the other players doesn’t mean that you can’t make the sorts of mistakes that would get you chastised in a physical poker room.

Ultimately, whether you’re in a real-life poker room or playing online, the rule of thumb that you’d do well to observe is that if you’re umming and ahhing about whether or not to say something out loud then opt for silence. It is the only way that you will know for sure that you haven’t messed up and broken one of poker’s most important unwritten rules. Keeping yourself out of trouble in this way will endear you to the other players at the table, regardless of whether that table is made up of wood and cloth or electronic bytes.

Previous Post: « Did You Know: Football Players Can Be Sent Off BEFORE Kick Off
Next Post: No Locals Allowed: The Casinos That Only Tourists Can Visit »