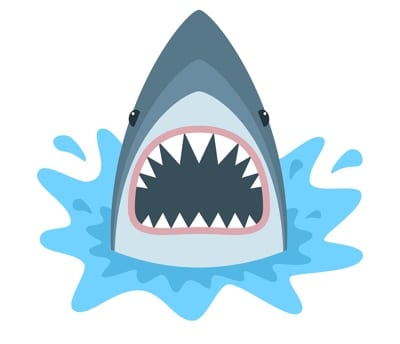 Online poker’s popularity has enjoyed peaks and troughs over the years since it first became a going concern. There are numerous reasons for this, not the least of which is the fact that poker itself has seen its popularity explode and wane at different times. Another reason for a dip in online poker’s popularity, especially during the early days, was the prevalence of poker sharks hanging around at the tables and cleaning less experienced players of their hard-earned cash.

It is, of course, new players that bring money into poker rooms because the more experienced players only tend to withdraw from their accounts rather than pay money into them. The more often players were losing money, therefore, the harder poker rooms found it to remain profitable as they wouldn’t return. Means were then introduced to stop sharks from being able to ruin the game quite so consistently for lesser players. Even so, you shouldn’t just depend on online poker rooms from stopping the sharks, instead you should learn how to avoid them when you play poker online.

What Are Poker Sharks?

The first place to start is by having a look at the things that online poker sharks tend to do when they take to the tables. As with any other sport, the gap between the professionals and the amateurs is a wide one. Just as you would be respectful of Mohamed Salah if he turned up to play in your Sunday 5-a-side game, so too should you be wary of the better poker players because their main aim is to make as much money from you as they can.

In the world of poker, the sharks are at the top and they’re constantly circling the waters of the poker rooms in order to find some fish to feed on. The very best poker players will be on the look out for a whale, which is essentially just a big fish that they can reel in and take for everything they’re worth. Sharks behave in a way that reflects their place at the top of the poker food chain, with the following being their most noteworthy behaviours:

Playing in a Balanced Way

Poker sharks will constantly try to keep you on the back foot by balancing their play as much as possible. This means that they’ll throw some bluffs and some semi-bluffs into dead-cert wins in order to ensure that you’re never quite certain whether they’ve got a good hand or not. In other words, they don’t just bet when they’ve got good hands, checking, calling or folding with everything else.

This clever method of mixing up their style of play is often complimented by adapting their play to ensure that they take advantage of what’s happening on their table. Let’s say that you’re on a tight table but a loose player joins in, sharks will often switch their way of betting in order to ensure that their edge is maximised accordingly. They will be constantly evaluating what’s happening in a game and figuring out their best play in any given circumstance.

One of the chief tactics of a poker shark is to play in an aggressive manner, largely in order to get players to fold rather than have to play a hand out in full. Less experienced players will only feel confident in betting big when they’ve got a decent hand, whereas the better players will do it sporadically in order to keep you on your toes and win hands through force rather than the cards in their hand.

Obviously, this is a harder one to look out for online than it is in real life, but the very best poker players let bad hands or decisions that prove to be a mistake go as soon as they’ve happened. There’s no point crying over spilt milk, as they say, which is the attitude that sharks have to every hand they play. After all, they’re only going to be able to play in an optimal fashion if they can remove emotion from their decision making.

Tools of the Sharker’s Trade 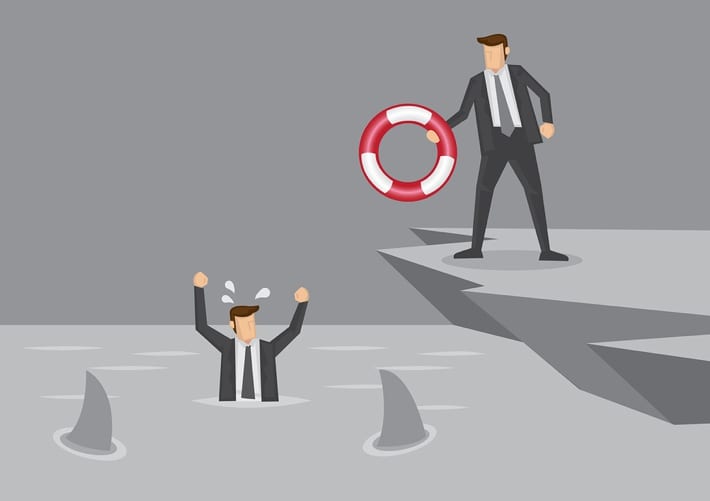 The key difference between online poker and playing the game in real life is that technology has allowed poker players to use tracking software in the years gone by. Sometimes these software types allow players to simply keep track of their own hands, reviewing them in the cold light of day and when there’s no pressure of the clock to help them decide if they made the right call during any given hand.

Obviously there’s nothing wrong with that and less experienced players would find it useful to develop their own game by looking at how they’ve played and what their tendencies are. Unfortunately, not everyone uses such software in a legitimate and fair manner. Some people use that sort of software to build up profiles of other players and keep track of how that player tends to play the game.

This would obviously allow them to make a note of players that are weaker and therefore exploit them whenever they login to play online. Some people have also decided to share their databases with other players, sharing access in order to allow people to bring up a detailed profile of who they’re playing poker against on any given online platform.

Over the years poker sites have done more and more to reduce the ability of sharks to track people, making choices that have included adding anonymity to tables in order to make it difficult, if not impossible, for sharks to keep track of other players.

It’s noteworthy, for example, that partypoker introduced a ban on tracking software in May of 2019, forcing all users to change their usernames in order to make the software null and void. Heads-Up-Displays, also known as HUDs, were banned, whilst hand histories could no longer be downloaded.

Partypoker isn’t the only site to issue such a ban, either. Many different sites have attempted to become the ‘fairest’ online poker site by banning such software, including the use of bot-controlled poker accounts that allow computerised programs to make all the decisions during a game in order to win as much money as possible for the player.

One sure way to avoid people looking to beat you unfairly, therefore, is to make sure you only tend to play poker on the sites that have introduced such bans. It is undoubtedly good news for recreational players that such tools are being banned more and more commonly, even if the grinders aren’t happy and sites like partypoker stand to lose about ¢10 million in revenue because of it.

What You Can Do Yourself to Avoid Sharks

Depending on sites to ban the tools that certain sharks use is ok, as is knowing what playing style the majority of sharks will opt for. Yet neither of those things alone will be enough to stop you from falling victim to a shark’s work if you don’t know what the best things are to do in order to stop yourself being taken for a ride by a brilliant player who knows how to exploit a weaker one.

That doesn’t mean that you should let those sorts of players spoil your fun, however. Just because sharks exist in the world of online poker doesn’t mean that you should pack up your chips, throw in your hole cards and walk away from the electronic table. Instead, learning how to avoid them is the best way forward, allowing you to both enjoy online poker for the fun game that it can be at the same time as making sure that you only lose your money fairly.

You might think that you’re safe enough playing on low stakes tables. After all, why would a decent poker player bother heading somewhere where the stakes can be as low as £0.01 or £0.02 per hand? The reality is, however, that that’s exactly where sharks like to circle because they know that it’s also where the greenest fish tend to head in order to learn how to play online poker properly.

No, the stakes nor the pots aren’t that big in those sorts or rooms and they’ll have to pay for hours in order to win as little as £20. Yet you also need to remember that the best sharks will often have several poker tables open at the same time, meaning that they could be earning £100 per five hours play. Play for ten hours per day, five days a week and you’re suddenly looking at £1,000 per week in tax free earnings.

The most sensible move you could make, therefore, is to avoid the rooms with the lowest stakes and head to one a little higher up the chain. Obviously this brings an inherent risk to it in the form of better players in general being in there and therefore you’re less likely to win hands until you’ve found your feet. At least you know that you’re simply losing to better players, though, and not people deliberately looking to take advantage of your inexperience.

Sit Down with More Money Than You Plan to Bet With

One of the tell-tale signs that sharks look for in players to see if they’re a fish is how much money they sit down at a table with. This isn’t a hard and fast rule, of course, but the less experienced players will usually only sit down with a small amount of money because they’re fear risking too much money in one go.

If you have as much as one hundred times the big blind then you’ll look like you’re a shark yourself, given that’s the sort of amount they tend to sit down to play with. Weaker players will often view as many flops as possible, fearing missing out on a good hand once the first three cards have been put on the table. Try to resist that urge or you’ll soon eat through your stake money and feel the need to spend more of it.

Instead, set yourself a limit of how much you’re willing to lose. Let’s say that you’re only willing to lose £20 playing, but you’ve put £100 into your account in order to look more like a shark than a fish. When your £20 is spent, simply walk away from the table and have a think about what you’ve learned.

Play the Sharks at Their Own Game 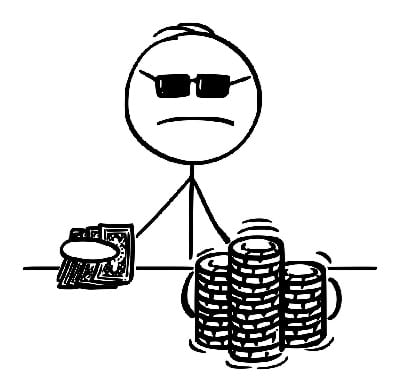 Have another read through the list of possible shark behaviours. How many of them do you do naturally? It’s probably not all that many, but if you can adapt a couple of them into your game then you’ll make it fair harder for sharks to predict what you’re going to do. What they depend on is players who always tend to do the same thing, meaning that they can quickly figure out when they’ve got a strong hand and when they’ve got nothing.

Mixing up your play is easy enough to do, as long as you’re prepared to lose some of your stake money. Don’t be afraid to ‘reveal’ that you were bluffing every now and again as some players will then think that you’re always bluffing. Mixing up your play is a sure-fire way to ensure that sharks steer clear of you because you’re not the easy pickings that they’re looking for.

Previous Post: « Match Fixing in Cricket: The Scandals & the Players Who Got Caught
Next Post: What Ever Happened to Stan James? »