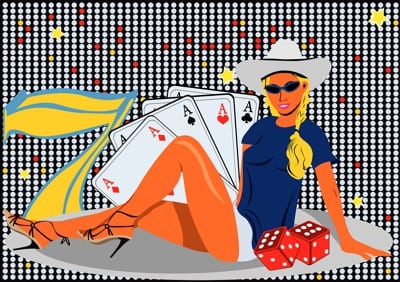 There was a time when the casino was virtually an all-male domain, certainly when it came to playing the actual games on offer. Women tended to be there as eye-candy rather than to join in. It was a time when you could still have a cigarette indoors and the smoke would cling to the ceiling, giving the venue a somewhat oppressive feeling. Thankfully, both society and the world of gambling has moved on since then and women have made themselves at home in casinos to the extent that some of the biggest poker players in the world are female.

There will always remain that slightly sexist notion for some people, of course, but the best female poker players use it their advantage and bank on the fact that some men around the table will under-estimate them or be looking at their chest instead of at their tells. Given that the best deal poker players out there are multi-millionaires, it’s fair to say that any under-estimating of them has been to the detriment of the people doing it. From the moment that Barbara Enright became the first female to be inducted into the Poker Hall of Fame in 2007, the glass ceiling has been broken and will continue to see women flourish in the world of poker.

Where else to start, then, but with the woman who paved the way for all of today’s female poker players. When she was inducted to the World Series of Poker’s Hall of Fame in 2007 the WSOP Commissioner, Jeffrey Pollack, said, “The criteria and standards for induction into the Hall of Fame are high. A gambler must have played against top competition for high stakes, played well and gained the respect of his or her peers, and stood the test of time”.

Enright had more than earned her place by the time she was inducted. Born in Los Angeles, she worked as a cocktail waitress and could remember long lists of drink orders thanks to her photographic memory. Soon she took the tips she’d earned and put it towards an education as a cosmetologist, which was a job in which she worked with numerous high-profile people, including Hollywood stars.

It was during the 1970s that she got a taste for poker at the Gardena card rooms, eventually quitting her job and turning professional. She won the WSOP Ladies World Championship in 1986, winning another one nine years later. In 1996, she wrote herself into the record books when she became the first female player to make the final table of the WSOP $10,000 Buy-In Main Event. She was once married to the Los Angeles Dodger’s pitcher and edited the first ever women’s poker magazine. In short, she was a trail blazer that led the way for everyone that followed.

What is that makes a ‘great’ player? Is it all about how much money they’ve been able to take home with them at the end of tournaments, or is also down to what they’ve done during their career? Either way, Victoria Coren Mitchell deserves to be on this list. Born in Hammersmith in London in August of 1972, she is a journalist and TV presenter who studied at Oxford University. In 2007, she met the comedian David Mitchell, with the pair marrying in 2012.

It’s at the poker table where Coren Mitchell has truly shined, however, becoming the first ever woman to win a European Poker Tour event when she won the EPT London in 2006. Not only that, but eight years later she won another one, this time at Sanremo, which made her the only player to have two EPT Main Event titles to her name. She was so successful that she was invited to become a member of Team PokerStars Pro, which she did before leaving in November of 2014 when they announced that they were opening an online casino.

Coren Mitchell was inducted into the Women in Poker Hall of Fame in 2016, completing an ambition she had had since she was a youngster of being successful in the world of poker. She joined the poker group of her brother before branching out and playing in the clubs around London and gaining the experience that would lead to her winning millions. She later released an autobiography entitled For Richer, For Poorer: My Love Affair With Poker.

We’ll stick in England for the next player on our list, with Olivia Boeree having been born in Kent in July of 1984. She got a First Class Honours degree in Physics with Astrophysics at the University of Manchester before taking part in the Ultimatepoker.com Showdown reality TV show in 2005, which gave her the poker bug. Three years later and she had won her first championship, earning herself $30,000 in the process.

Boeree truly began to get her name recognised when she won the European Poker Tour Main Event in Sanremo in 2010, becoming the third woman to win an EPT title, as well as taking home €1,250,000 for her trouble. Seven years on from that and she lined up with her boyfriend, Igor Kurganov, to win the World Series of Poker $10,000 Tag Team No Limit Hold’em Championship, adding $273,964 to her bank balance.

By August of 2019, her live earnings were just shy of $4 million, putting her right on the list for one of the game’s top earners. When she’s not playing poker, she still has plenty to do with the game, including being an on-screen presenter for both the World Series of Poker and the European Poker Tour, earning her nickname of the ‘Iron Maiden’. Perhaps the most important thing when it comes to Boeree is that she’s still relatively young, so there’s more to come from her.

Nowadays Annie Duke doesn’t play as much poker as she used to, instead spending her time writing instructional books for players that want to develop their games. She’s more than well-placed to do so, however, having become the only woman to win the National Poker Heads-Up tournament when she won it in 2010. That came six years after her victory in the World Series of Poker Tournament of Champions.

Duke might be known for her steely gaze on the poker table, but she’s also proud of the philanthropic work that she does. In 2007, she teamed up with the actor, Don Cheadle, to present Ante Up For Africa, a charity event that involved more than a hundred and fifty celebrities and poker stars. She has also written books that use poker to inform people about other walks of life, such as her 2018 title, Thinking in Bets: Making Smarter Decisions When You Don’t Have All the Facts.

The Duchess of Poker was born in Los Angeles in 1965 and went on to study English and Psychology at Columbia University. She enjoyed that so much that she then went on to get a PhD in Psychology from the University of Pennsylvania – skills that no doubt helped her on the poker table. Her life as a professional poker player is largely thanks to the generosity of her brother who believed in her so much that he sent her $2,400 and gave her instructions into how to play the game over the phone. He also encouraged her to enter her first WSOP tournament in 1994 with the rest, as the say, history.

The final name on our list is also one of the most important. If you’re writing about women in poker then it’s impossible not to talk about Vanessa Selbst, given that she is the most successful of all time in terms of money won. She has three World Series of Poker titles to her name and more than $11 million in her bank account, all thanks to her skill at the poker table. Not that she’s always been successful, earning a reputation as an aggressive player by going all-in with a five and a two against a pair of aces on the final table of the WSOP event in 2006.

In many ways, of course, Selbst was just living up to the reputation of people like her that were born in Brooklyn, which she was in June of 1984. She spent a year at Massachusetts Institute of Technology before transferring to Yale University, where she studied Political Science. She returned to Yale in order to study law, graduating from Yale Law School in 2012. It was poker that soon gained her attention, however, and her success meant that she became the first ever woman to earn the top ranking from the Global Poker Index.

On New Year’s Eve in 2017, Selbst decided that she would retire from professional poker, going on to become an Investment Associate at Bridgewater Associates. Not only did she walk away as the most successful female poker player of all time, but she was also the only openly gay poker player to have won more than $10 million during their career. Not that she could stay away from the world of gambling for long, entering the WSOP event in 2018 and playing her colleagues at work for money on a regular basis.

Previous Post: « Has Anyone Won the Lottery More Than Once?
Next Post: Is Card Counting Possible Online? »