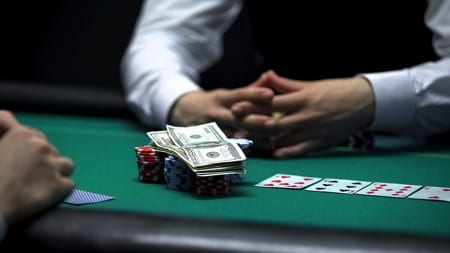 There is a reason poker is a game that pretty much anyone can win and that reason is the ability to bluff. You can win poker with brilliant hands but you can also win poker games with appalling hands if you’re willing to stick to your guns and, essentially, lie to your fellow players about the hand that you’ve got. That means you can also get called out, of course.

Bluffing isn’t just about being confident in your calls. It’s also key to have a vague understanding of the hands that other players might have. After all, it’s no good in bluffing if the player you’re trying to pull the wool over the eyes of knows they have the best hand in the game. Here’s a look at some of the biggest bluffs that the professional game has ever seen.

What Is a Bluff?

First things first, though. What exactly is a ‘bluff’? According to the dictionary, the noun is defined as ‘An attempt to deceive someone into believing that one can or is going to do something’. The verb, meanwhile, is defined as when you ‘try to deceive someone as to one’s abilities or intentions’. Both are equally applicable in the world of poker.

Simply put, a poker bluff is when you either make a bet or offer a raise that is an attempt to make another player fold a hand that you suspect is better than yours. The best players will save their bluffs for the best moment in a game, which is when they think that their opponent will be most likely to fold. Understanding bluffing is a vital part of poker as a game.

Looking at the Biggest Bluffs

Now that we have a better idea about what bluffing is, let’s delve into the history books and have a look at some of the biggest and bravest occasions in which a player has managed to bluff their opponents something rotten.

There are times to bluff your opponents and times that you probably shouldn’t. Most people would put the Head’s Up section of the final table of the World Series of Poker’s Main Event at the top of their ‘don’t’ list. Chris Moneymaker isn’t most people, though. Back in 2003, he had entered the WSOP Main Event courtesy of a win in a $39 satellite tournament.

He was entirely unknown and through skill and ability found himself at the final table and up against seasoned player Sam Farha. It came at a time when ESPN, broadcasting the World Series of Poker, had changed its broadcast technique and had a camera that could show viewers at home both players’ hole cards. By the time the River was dealt, everyone expected Moneymaker to fold.

Everyone was wrong. Despite having absolutely nothing in his hand and going up against Farha’s pair of nines, Moneymaker went all-in. It came after a raise on the Turn that must have had Farha questioning what he had, so eventually decided to fold and Moneymaker went on to win the tournament. He did the bluff with king-seven unsuited compared to Farha’s queen-nine.

The bluff by Moneymaker might not be one of the most insane ever to take place, but it changed poker forever. It is widely considered to be the moment that thousands of people all around the world believed that they too could win $2.5 million through online poker, given that Moneymaker had done so from a $39 entry fee and by bluffing spectacularly.

In 2008, Tom Dwan won more than $5 million playing online poker. He became something of an idol for the new generation of poker players who discovered the game in the wake of Chris Moneymaker’s major bluff a couple of years before. People were going online just to watch him play, so it’s fair to say that we was something of a poker celebrity by 2009.

Perhaps that’s why his bluff against Barry Greenstein during an episode of the High Stakes Poker TV show is so beloved of the poker world. The fact that Greenstein, a notoriously tight poker player, was dealt Pocket Rockets compared to Dwan’s queen-ten suited and yet still lost is also part of the reason that it went down in poker playing history.

Greenstein opened the betting and pretty much everyone called. Dwan splashed the pot before the flop and that removed a couple of the other players in the game. The flop revealed a pair of twos and a ten, seeing more players drop out of the running. Indeed, by the end of the post-flop betting there’s only Dwan, Greenstein and Peter Eastgate left in the game.

The turn reveals a seven and is checked around to Dwan who bets big. Eastgate folds out, leaving the two of them to battle it out. Dwan might have been expecting to need to bet again on the river, but he didn’t even need to as Greenstein also folded, handing his opponent a $250,000 pot. Not bad considering he had the third worst hand of the triumvirate.

Nowadays Jack Strauss is known as being one of the best poker players of his day and the 1982 Poker World Series is when he really made his name. He’d finished second in the inaugural World Series of Poker in 1971, so he wasn’t exactly an unknown, but what he achieved here was remarkable. At one point he was down to just a single chip but still won.

In fact, he was so close to being out of the tournament that he’d stood up and put his coat on and was preparing to leave before he spotted a single $500 chip underneath his napkin. He went all-in a number of times and doubled his stake, keeping himself alive for another two days of poker. The hand we’re focussing on here saw him handed a two-seven unsuited.

That’s the worst hand you can get in poker, so really he should have walked away from this particular hand of No Limit Texas Hold’em. Instead, he raised regardless and removed all but one player. The flop gave him two pair thanks to a seven-three-three, so he bet again, even though he probably knew it wasn’t enough to beat his opponent.

The turn presented him with a two and he lay down a massive $18,000 bet. On top of that, he said to his opponent, “I’ll tell you what, just give me one of those $25 chips of yours and you can see one of my cards, whichever you choose”. The opponent agreed, paid the fee and happened to look at Strauss’ two. Thinking his opponent had a full house, he folded out.

If two-seven unsuited is the worst hand in poker then it is closely followed by three-eight unsuited. That’s the hand that Scotty Nguyen was dealt when going up against Humberto Brenes on the third day of a televised tournament. To make matters worse, Brenes had a significant advantage over his opponent thanks to his ten-ace unsuited.

Most of the buffs that we’re looking at here are impressive because of the fact that they occur after at least the flop has been dealt. What allows Nguyen’s to stand above the pack is that he managed to bluff his way past his talented opponent before the community cards had even hit the table. Impressive enough even without the fact that Brenes was so confident initially that he raised the action.

It came after Nguyen had already made a raise, with Brenes lifting it to $40,000 thanks to his 69% of winning. Nguyen declared that he was making the ‘greatest move I’ve ever made’ when he raised it to $100,000. He then baited his opponent, telling him that he couldn’t afford to make the bet. Brenes spent a decent time thinking about it before mucking in his cards.

Not content with winning, Nguyen then rubbed it in his opponent’s face. He showed the watching audience what he had and demanded that Brenes turn over his cards. When he did, Nguyen walked away with his hands on his head declaring, “I thought we were playing blackjack!” It was immediately declared as a Hall of Fame bluff by the commentators, who weren’t wrong.

Phil Ivey is one of the best known names in the professional poker world, with not many people emerging from a tangle with him with their chips still intact. That is the case even less often when the players he’s up against don’t even have good cards to speak of, yet that’s exactly the position that Brad Booth found himself in during a High Stakes Poker matchup.

David Williams was also involved in the game and raised the stakes initially when he had jack-seven unsuited. Booth had suited four-two, but that’s an almighty flush draw he was hoping for when he opted to raise the pot by $5,800. Ivey was sitting pretty with a pair of kings, so he went over-the-top with a $14,000 bet. It was enough to see off Williams, but not Booth.

When the flop revealed a three and six of diamonds and a seven of spades, most people assumed Booth would throw his hand away. That was even more the case when Ivey went big with a $23,000 raise. Booth was all-in with his bluff, so naturally he went all-in with his chips, too. $300,000 was what Ivey needed to think about and decide whether it was worth calling.

In the end, it worked a charm for Booth with Ivey figuring that he must have had something good in his hole to be going so big from the off. Booth scooped the pot and managed to beat one of the best players in the game with four two suited. Yes, he had a potential flush draw and an inside straight draw, but Ivey was definitely favourite with a pair of Kings!

There are so many bluffs that we could have chosen for this list, so it’s fair to say that it is far from exhaustive. We’ve opted to look at an interesting mix of different ones, so it’s only right to end with the bluffer’s bluff. By that we don’t mean that it’s one that all bluffers love, but rather that both players involved in the hand were trying to out-bluff each other.

They were heads-up on the final table of a tournament worth $1 million, though in fairness second place was going to walk away with $600,000, so it’s not as if it was feast or famine. Phil Ivey was leading the chip count by four-to-one when he was dealt queen-eight suited. That gave him a 75% chance of victory over Paul Jackson, who was sitting on six-five unsuited.

When the flop came out it presented a seven and a pair of jacks, one of which was a heart that must have had Ivey thinking about the outside chance of a flush. That might explain why he bet $80,000 to test Jackson, who then went over-the-top to $170,000. Ivey decided to re-raise it to $320,000, putting the pressure back on Jackson despite both players having nothing.

Jackson decided he was in for a penny, in for a pound, so he re-raised again and took it to $470,000. Ivey asked him what he had left, was told about $380,000, so Ivy went all-in. That was finally enough to stop Jackson, who threw away his cards and lived to fight another day. The absolute chutzpah of the two players to bluff each other with nothing is what poker’s all about.

Previous Post: « Can Anyone See Your Cards in Online Poker?
Next Post: Are Loot Boxes Considered Gambling? »