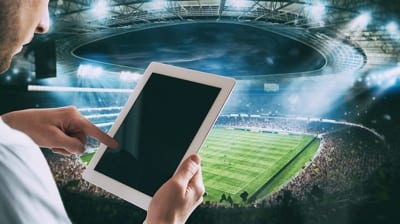 Since the first ever person offered odds on something happening and the first ever punter took them up on it, bettors have been trying to find ways to get one over on bookmakers. There have been any number of wild and wonderful attempts to beat the bookies over the years, from the man who developed an algorithm that allowed him to win more than $1 billion, through to the Gay Future affair that used two horses that looked quite similar but had differing abilities being swapped for each other.

The modern day practice that has seen the bookmakers take a few unexpected losses is that of courtsiding, wherein a punter watching an event live can place bets before bookmakers know that something has actually happened. It’s where the disparity between betting online and doing so in person really comes to the fore, giving people the opportunity to place bets that they wouldn’t otherwise have been able to. In-Play betting has revolutionised the way that gambling works, but sometimes it’s more in favour of the punters than the bookies. 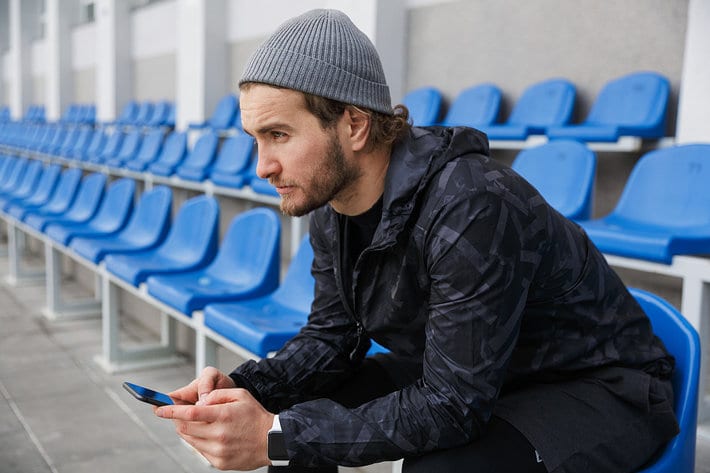 Imagine that you’re watching a sporting even live and you know that you’ll get the information slightly ahead of someone else. Would you use that information to place bets that you know will be winners? That, in essence, is the practice of courtsiding. It gets its name because it’s most common in tennis, with people sitting at the side of the court and placing bets as soon as an event has happened and before bookmakers get the chance to react to it.

Sometimes the spectator is placing a bet themselves, sometimes they’re just passing on information to someone else who places the bet on their behalf, with the team sharing the net win. It shot to fame as a practice in 2014 when a man named Daniel Dobson was arrested at the Australian Open for ‘engaging in conduct that would corrupt a betting outcome’. Dobson had an electronic device sewn into his shorts that was linked to his mobile phone and used it to relay the results of tennis matches that his partners then bet on. 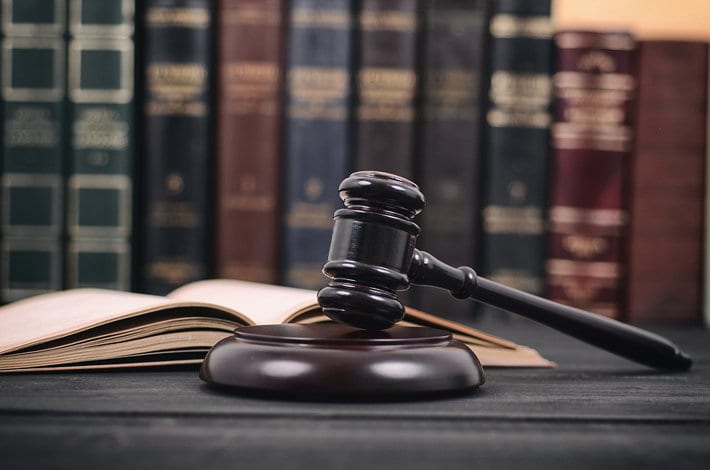 Courtsiding isn’t actually illegal in the United Kingdom, but it is frowned upon because it gives the people at the event an advantage of those that are watching at home. There is a lag between the live event and the broadcast of it, sometimes for as long as ten seconds. That means that people watching it in person can place bets that they know will be winners, whilst those watching at home or elsewhere might not be aware of the outcome of.

Betting exchanges don’t typically allow you to bet on individual points within a match, but they do allow people to bet on the outcome of games. If you were betting on a game and the person you were betting against in the peer-to-peer world of exchange betting knew that every bet he placed was going to be a winner, there’s no doubt that you’d see it as being extremely unfair. For that reason, the organisers of sporting events are working to try to eradicate the practice by keeping an eye out for people who might be guilty of it.

Fixed odds bookmakers often do allow you to bet on individual points and because you’re not getting an advantage over other bettors but rather multimillion pound companies, many people think that it is fair game. Obviously, the bookies don’t agree, however, and so they are trying to do everything that they can to stop punters from betting in that manner. Sometimes, though, that causes problems for innocent people just using their phone to send a quick message or email during a sporting event, as we’ll discuss shortly. 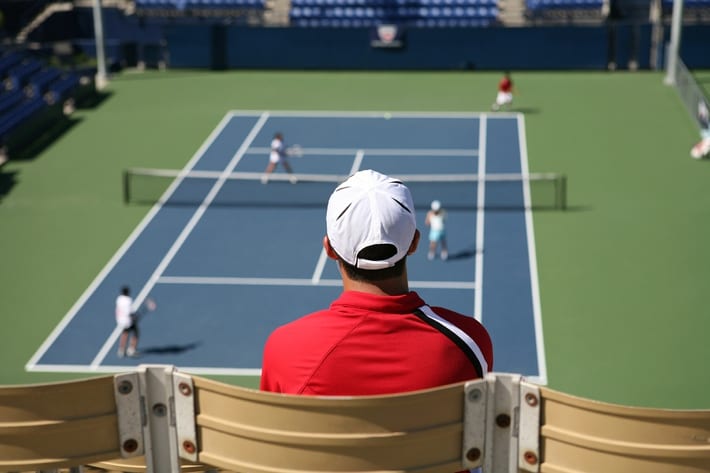 In a recent BBC documentary, the host of the show, Lloyd Griffith, met with a gambler named Joe who said that he had made more than £300,000 by courtsiding. His practice was one in which he took advantage of the fact that bookmakers allowed him to bet on individual points within a game. He discovered that high-level tennis matches require umpires to enter the score into an electronic device that sends the information to bookmakers, who then react accordingly. He searched for matches that were being umpired by someone that was slow to input the points, giving him a significant advantage over the bookies.

If he could find matches that had a combination of poor players, that occasionally did something good like serve an ace, and slow umpires, then it was even better. In one instance, the umpire of the match Joe was watching actually locked himself out of the online system, meaning that he needed to put his pin into the machine before he could register the point. That gave Joe ample time to logon to his online account and place his bet before the bookmakers even knew what was happening.

What Happens If You’re Caught

At the time of writing, courtsiding isn’t an illegal practice in the UK, but it is frowned upon. It’s a little bit like card counting in casinos, insomuch as those that practice it aren’t doing anything that’s against the law but if they’re spotted then they’ll politely be asked to leave. Courtsiding is probably best described as legal cheating, given that it allows those with the live information to gain an advantage over the companies that depend on technology to help them know what’s happening at any given moment.

Consequently, those at an event who are caught courtsiding will usually be asked to leave the venue and not come back. It means that punters are having to engage in more and more illicit practices in order to try to avoid detection, including the likes of wearing wigs and having earpieces that can’t be seen by those looking out for guilty parties. It also explains why Daniel Dobson had felt the need to have the electronic device he was using sewn into his clothing, hoping that that would help him keep out of the firing line of those looking out for the people cheating the bookies.

When Over-Eager Spotters Get It Wrong

As mentioned earlier, it isn’t always easy for those that are supposed to be keeping an eye out for people cheating the bookmakers. As you can imagine, the vast majority of people attending a sporting event have no interest at all in placing bets whilst they’re doing so, instead soaking up the atmosphere and enjoying their time watching some live sport. In this day and age, however, pretty much everybody has a mobile phone and will use it during sporting events to send messages, write emails, update their social media and even make phone calls during the match’s down time.

If people are on the lookout for those sending information to third-parties in order to make money, then there’s no question that they have their work cut out. So, it proved during a match between Hull City and Reading in the Championship, when David Mawer was approached by someone describing themselves as an ‘undercover security guard’ and was questioned about his phone usage. Mr Mawer tweeted about his experience, explaining how the ‘security guard’ informed him that if he continued to use his phone, then he’d be ejected from the stadium.

Today, at half time I was told by an ‘under cover security guard’ that if I continued to text about the football match at the KCOM stadium I’d be ejected from the ground.

As it transpired Mr Mawer wasn’t a courtsider but was instead just a regular sports fan who sent texts to his friends and family about what was going on during the match. Mawer also pointed out that both Hull City’s social media team and BBC journalists at the ground tweeted out what was happening in the match quicker than he could ever send a text because they would be working on computers and have Wi-Fi access. Eventually it led to the football league apologising, with Director of Case Work at the Football Supporters Federation, Amanda Jacks, saying that it was only a minority of people who go to football in the hope of manipulating betting markets.

Is It Fair to Stop Average Punters from Gaining an Advantage? 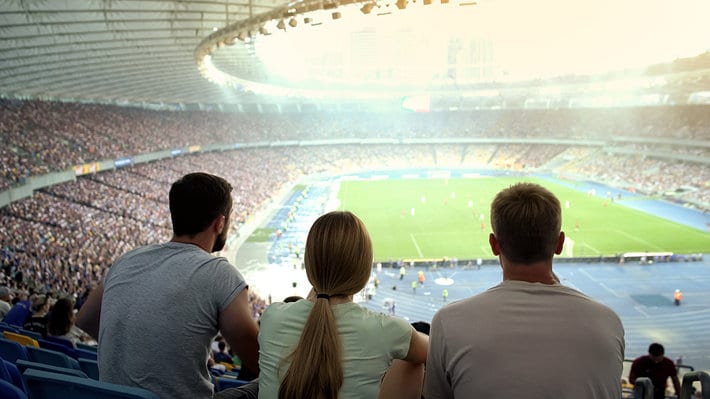 Using courtsiding as a method to win money from fellow punters on betting exchanges is clearly an unfair practice because peer-to-peer betting should be done on a level playing field. Yet the reality is that bookmakers regularly do whatever they can to gain an advantage over the average bettor, not just by having a pre-set edge built into their odds to ensure that they’re always in the black. If you were to win too often, for example, then it’s common practice for bookmakers to simply ban you or limit the stakes that you can wager with.

It’s a practice that many think will be clamped down upon over the next couple of years, especially after it was drawn to the attention of legislators. Indeed, many feel that the government will have no choice but to interfere if bookies keep banning anyone who manages to win money off them on a regular basis. That ability to decide who does and who doesn’t get to place bets depending on their betting record, to say nothing of bookies being accused of targeting losing punters to get them to bet more often, is why plenty think that there’s not a lot wrong with courtsiding.

There’s also the fact that those with enough money have been able to hire boxes at racetracks for years in order to place bets In-Play against other bettors on the betting exchange sites. This has allowed them to take advantage of the delay of many seconds between live action and the broadcast images. With the likes of Betfair having offered in-race betting for a long time, it has basically meant that people that can afford to actually be at the track and can hire a box with high-speed Internet access have long been able to get one over on those that can’t.

The idea of banning people from courtsiding, therefore, seems to be targeting those with less money who might just want to get one over on bookmakers that have been taking advantage of their own knowledge for years. The rule essentially seems to be that if you can afford to bet big then bookies will turn a blind eye to how you’re doing it, whilst if you’re operating with smaller stakes then they’ll clamp down on your wherever they can. It’s an interesting debate that is sure to rage for some time, but next time you’re at a sporting event, then keep an eye out for people wearing wigs and earpieces or the folk that are tasked with spotting them.