Each year, marathons take place all around the world and hundreds of thousands of people enter them. In terms of their notoriety, the London Marathon is up near the top of the list, thanks in no small part to the number of world famous landmarks the runners go past during the event. It is common for participants to dress up in costumes in order to get people to sponsor them, which is largely because it is often the case that runners are doing the marathon in order to raise money for one or more charities via sponsorship.

Unfortunately, the notoriety of famous marathons as well as the challenge that the present means that some people will enter one without doing the sort of preparation that is essential if you’re hoping to complete the event safely. As a result, there are sometimes deaths that occur during the race. Sometimes, the death is not because of a lack of preparation but unforeseen circumstances. Whilst it is obviously a tragedy every single time someone loses their life, it is thankfully not all that common an occurrence when you look at the numbers.

What Is the London Marathon?

Taking place on an annual basis, the London Marathon takes place, as the name suggests, in the English capital city of London. First run on the 29th of March in 1981, it is second to only the Great North Run in terms of size when it comes to races that take place in the United Kingdom. It is usually held in April and starts in Blackheath, with runners finishing the event at The Mall. It is a largely flat course that tends to roughly follow the River Thames and has been part of the World Marathon Majors since the 2006 running.

The London Marathon takes place in several different guises. There are professional races for both male and female runners, which are registered accordingly, as well as elite level wheelchair races for both sexes. There is also a mini marathon, which takes place over three miles and is open to athletes under the age of 17. The main part of it is the mass running event, which is open to the public and is the largest marathon event in the UK. Since its founding, which was by Chris Brasher and John Disley, it has raised more than £1 billion for various charities.

The London Marathon is an extremely popular one to take part in. The fact that the course takes in the likes of Greenwich Park, the Cutty Sark, Canary Wharf and Buckingham Palace means that people from all over the world apply to take part in it. Between the first marathon that was run in 1981, when 20,000 people applied to run in it, and the marathon of 2022, there have been 5,334,173 applications to take part in the event, showing its popularity. Of those, 1,570,778 runners have had their applications accepted.

During that period, 1,155,457 people have actually started the race, with 1,125,789 making it all the way to the end. During the period in question, 13 people have died as a result of taking part the London Marathon. To put it another way, that is 0.0011% of all of the people that have started the London Marathon, suggesting that it is an extremely uncommon occurrence for anyone to die running the event. That doesn’t make their deaths any less awful, but it is at least reassuring that participants are more likely to finish it than to die.

On the day of the London Marathon, the St. John’s Ambulance provides first aid and medical service to the participants. There are usually more than 1,000 volunteers who are dotted around the route, working alongside the likes of doctors, physios, podiatrists and others who are interested in the world of sports medicine. Any time a runner makes contact with one of the first aiders, the contact is noted as a ‘casualty contact’, even when the reason for the runner speaking to the volunteer isn’t actually for any sort of medical reason.

Here is how the contacts are split up into various categories by St. John’s Ambulance:

In 2000, 32,600 people completed the London Marathon. During the event, there were 4,633 contacts with St. John’s Ambulance. To give you a sense of context over that, there were 19,970 runners in 1987 and 4,984 of them made contact with a volunteer from the St. John’s Ambulance. There were 38 hospital contacts in 2000, compared to 10 in 1987. In order for a death to be considered to be a London Marathon death, it needs to have occurred during the marathon or within the finishing area of the race itself.

Here is a breakdown of the ‘Constitutional Contacts’ from the London Marathon in 1987, to give you a sense of the seriousness of such issues:

Whilst the likes of a headache could obviously be serious, as could dehydration, the reality is that only chest pain, breathing difficulty or collapsing is likely to lead to serious complications. In 1987, that made up just 20 of the 197 cases, or 10.15% of the incidents.

The Most Common Cause of Death 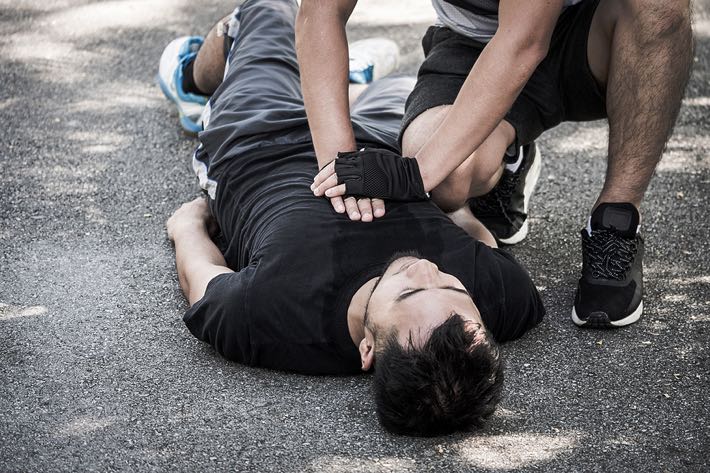 Knowing that you’re unlikely to die running in the London Marathon is obviously a good bit of news, but being prepared is the best way of limiting the likelihood of dying during the running of the event. It is vital that you train properly for a marathon, with those that have not done the necessary training ahead of such a race putting themselves in harm’s way. Though exercise is always beneficial, as most doctors would tell you, there is a sense from some medical professionals that the length of a marathon, 26.2 miles, is too long.

Most of the injuries suffered by runners in the London Marathon, as with any event run over such a distance, occur thanks to minor things, such as sprains, pulled muscles and strains. They are likely to heal on their own, provided no more stress is put on them. When runners take part in races, one of the key things that they need to keep on top of is their hydration, such is the extent to which up to four litres of fluid can be lost thanks to exhalation and sweating. That being said, one of the biggest killers is heart problems.

Many of those that die running a marathon lose their life because they had a heart condition that they were unaware of before taking part in the race. Running in a marathon puts extreme strain on the heart, which can cause major problems if it isn’t fit and healthy. This was shown in 1984 when Jim Fixx, an author and guru of running, died whilst taking a casual run along a country road in the state of Vermont. As pointed out by the Race Director of the Boston Marathon in 2019, Dave McGillivray, “Being fit and being healthy aren’t the same things.”

Research suggests that marathons cause short term damage to the heart, but it is unclear as to whether that damage can be long lasting. There are certainly benefits to running, with fitness as a whole being a protective measure. The problem is that there is evidence to suggest that extremes in temperature can cause the arteries in the heart to constrict. The result of this can be spikes in blood pressure, which is obviously a dangerous mix when combined with the extreme exertion of running and the stress of a competition.

On the one hand, regular exercise has the potential to reduce cardiovascular risk by a factor of ‘two or three’, according to Montreal’s Canadian Cardiovascular Congress. This obviously sounds like good news, but research has also shown that ‘extended vigorous exercise performed during a marathon raises cardiac risk by seven fold’. In other words, there is no one way of behaving that will reduce your risk of serious illness. That is especially true for those that don’t realise that they have any sort of cardiovascular issue.

What You Can Do to Limit the Likelihood of Death

There are certain things that you can do in order to limit the likelihood that you’ll die whilst running a marathon. The first thing to bear in mind is that that percentage is extremely small. When the American College of Cardiology looked into marathons back in 2009, they discovered that the risk of sudden death during such an event is 0.8 per 100,000, which means that the London Marathon is even better than the average. This was backed up by research from Johns Hopkins University three years later, which put it at 0.75 per 100,000.

Listening to your body is always important. That, of course, isn’t the same as listening to your brain, which is likely to tell you that going for a run is a bad idea pretty much whenever you decide to do it. You should also look out for a combination of factors, such as what the weather is doing, how humid it is, your family history and so on. The World Health Organisation believes that a mixture of humidity, heat and heart disease can be a deadly combination, which is likely to be exacerbated by an unhealthy diet or a poor conditioning programme prior to taking part in the London Marathon.

It is obviously important to follow the advice of medical professionals, despite what try hard weirdos on the internet might tell you. If a doctor informs you that you are at risk then don’t do anything to increase that risk. Knowing your family history can help, as can doing whatever you’re able to in order to maintain a healthy level of cholesterol. The likes of shortness of breath, chest pain and lightheadedness are all signs that you’re pushing your body too far, so listen to it and don’t do too much in any one go, even if you’re keen to finish the race.

Previous Post: « How 433 People Won the Philipines Lottery Jackpot
Next Post: How Would a Premier League All Star Game Work? »