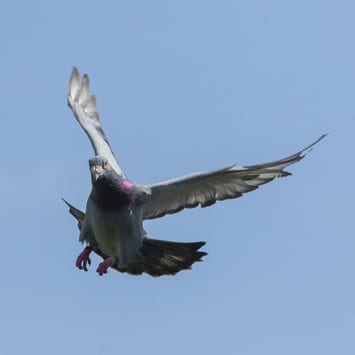 People love being competitive. Get the right folks into a room together and they would have a wager with each other over which fly would be the first to take off from a window ledge. It’s why betting is so popular and why competitive sport will always dominate both people’s consciousness and the newspaper headlines. Perhaps that is evident nowhere more than in the world of competitive pigeon racing, which some believe can be dated back as far as 220 AD.

You might well read this piece and check the date to make sure that it’s not April the first, but for those involved, pigeon racing is a very serious business. From the Belgian pigeon fanciers that developed specialist birds known as Voyageurs through to those in the UK that have moved more towards ‘one loft racing’ in order to discover the best individual bird without the trainer being relevant to their success, the industry is one that is much-loved by those that know about it. Here’s a look at what it is and why it remains popular in certain quarters.

How Pigeon Racing Got Started

Pigeons were once bred in order to carry messages from one location to another, with their in-built homing capability important in terms of ensuring they would arrive at their destination. Though nothing is certain about the matter, it’s likely that the sport of racing pigeons first took place in 220 AD, if not earlier. The extent to which that sport was different to the one we know today cannot be overstated, with the modern day world of pigeon racing beginning in Belgium in the nineteenth century.

Believe it or not, the invention of the railway system aided the development of pigeon racing as a sport, with those hoping to participate able to transport their pigeons quite far in order to release them for a relatively modest cost. Simultaneously, timing clocks began to be mass-produced, allowing the competitors to time the journey of the participating pigeons far more accurately. One such clock allowed a race band to be entered into a specialist compartment with the time of the pigeon’s return on it, which could then only be opened by one of the race’s officials.

In amongst the developments in technology during the nineteenth century that allowed pigeon racing to become a major sport, particularly in Belgium, was the development of homing pigeons for use in communications. As an example, one of the world’s largest news providers today, Reuters News Agency, began life using homing pigeons to send stock prices between Germany and Belgium. Indeed, Nathan Rothschild is believed to have made a fortune in the bond market by hearing of Napoleon’s defeat at Waterloo before anyone else thanks to homing pigeons. 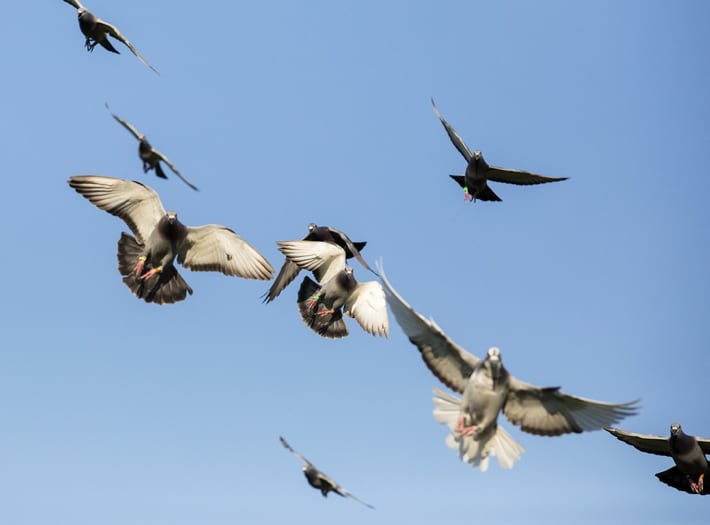 The short answer to how pigeon racing works is that pigeons are removed from their lofts, taken to a starting point a significant distance away and then they need to find their way home. The distance traveled and the time taken to make it back are both recorded and the bird that makes it back to its original loft the quickest is declared to be the winner. The distance that races are run over can be anywhere from one hundred kilometres to one thousand kilometres, whilst in the United States of America races have been run over as much as one thousand eight hundred kilometres.

The average racing career of a pigeon is about three years, though it has been known for those as young as six months and those as old as ten years to compete. Back in Belgium during the sport’s more formative years, paint was used to distinguish between the birds before an eight of an inch brass band was developed to be used on the pigeon’s legs. Nowadays such a ring is placed on the leg of a bird when they’re just a few days old, with its identifying number etched onto it. There are two timing methods in use when racing pigeons:

This involves a rubber ring with unique numbers on it being placed around the leg of a pigeon before the race. When it returns home the owner places the ring in a slot in the clock which records the time it was placed in the clock and from the time an average speed is measured

Birds using this method are fitted with an RFID chip that can be read once the pigeon has returned home. The scanner is placed in the entrance of the loft so that the tag is scanned automatically as the pigeon enters. The ETS system is constantly being developed and refined to make it as accurate as possible

There are numerous hazards that racing pigeons have to contend with during their journeys, not least of which is the likelihood of falling victim to a bird of prey. The birds fly at remarkable speeds, so it’s not unheard of for them to fly into things that they have been unable to see until it’s too late.

TV aerials and electricity pylons both fit into this category, for example. There’s also been some suggestions in recent years that mobile phone towers can interfere with a bird’s navigation, given that it’s believed that they use the magnetic field of the earth to find their way home.

It’s worth making a quick point about the controversy surrounding doping in the world of pigeon racing. In 2013, the Pigeon Fanciers Association sent blood samples from twenty pigeons in Belgium to South Africa for testing, with the results revealing that six of them had unusual substances in them. The samples revealed both paracetamol and caffeine within the bloods, as well as a fever reducing antipyretic.

These performance enhancing drugs can be used in avian racing in much the same way as in human races, with the intention being to improve the performance of the competitor. Some of the drugs are designed to open the respiratory tracts of the birds, with an inflammation of the lung known as hypersensitivity pneumonitis being a big problem for birds in modern day racing. The Belgian Ministry of Health has required mandatory drug testing of birds since 1995 and all winners have been tested since.

How Much It’s Worth

The aforementioned hypersensitivity pneumonitis has been driving some people away from pigeon racing for some time, but don’t let that fool you into thinking that the sport is drifting off in the areas of the world where people still very much care about it. If you want evidence of that then you need look no further than the case of the racing pigeon that sold for over £1 million in 2019.

Perhaps somewhat unsurprisingly, given all that we know about the sport of pigeon racing at this stage, the bird is of Belgian origin. Named Armando, it was owned by Joel Verschoot and sold online by the auction house Pipa. It was considered to be the ‘best long-distance pigeon of all-time’, which is part of why two Chinese pigeon fanciers got into a bidding war over the right to own it.

Nikolaas Gyselbrecht, the founder and Chief Executive of Pipa, compared the pigeon to Messi and Ronaldo, declaring that its race record ‘has not been matched by any other pigeon’. That perhaps helps to explain why bids for the bird came in from all around the world, including as far flung destinations as South Africa and the US. It is unquestionably China were the sport has taken off in recent years.

It’s the enthusiasm from China that has seen the prices for the best long-distance races shoot up in recent times, with the bidding for Armando going into the late evening of the final day of the two-week auction. Interestingly, whoever eventually won the bird will be unlikely to race him considering he was retired from being a racing pigeon when he was five-years-old, but his value came from the fact that he can be bred to create future champions in much the same way as thoroughbred racehorses are put to stud. That perhaps helps to explain his final sale price of £1.07 million.

A quick mention about the breeding of racing pigeons might be useful at this stage, considering someone in China paid more than £1 million for the ability to breed Armando. Pigeons become sexually mature at the six month mark, though fanciers normally wait a while longer before interring them into a breeding period. As with horse, dog and any other animal breeding, the partner is usually chosen rather selectively in order to ensure that the line is as strong as possible and as competitive as it can be.

It’s fair to say that the selective nature of breeding over the years is part of what has led to today’s racing pigeons being as impressive as they are. They can fly more than one thousand five hundred miles to make it come, averaging speeds of more than eighty miles an hour. Hens can lay as many as twelve eggs per year, so the right combination of mates can result in fanciers getting a collection of racing pigeons that can win races for years to come.

The Ever-Increasing Cost of Pigeon Racing

The reason the sale of Armando raised such eyebrows in the pigeon racing world is that it was a significant increase in the price of such specialist birds compared to the previous record sale. In 2013, a Belgian bird by the name of Bolt was also sold to a Chinese businessman but for £260,000, for example. That owner also planned to use Bolt to breed new racing pigeons, with the one that went for such a high price being named after Usain Bolt. It’s new owner doubtless hoped he would take after the Jamaican sprinter.

The seller, a Mr Heremans, sold his entire collection of birds for €4.3 million, seeing five hundred and thirty of them finding new homes thanks to Pipa, the racing pigeon auction specialist. Of those two hundred and thirty birds, nine of the ten most expensive to be sold during the auction went to new owners in either China or Taiwan, proving the sport’s popularity in the region. Speaking at the time about the auction and the impressive sales, Gyselbrecht said, “A painting made by Picasso is worth more than one made by an unknown artist. It’s the same with this pigeon”.

The final thing to tell you about in the world of pigeon racing is some of the races themselves. The season runs from April until September, with the big exception to this being the richest race in the world. The Million Dollar Pigeon Race takes place in South Africa every February and sees as many as four thousand birds from up to twenty-five countries compete for a share of the $1.3 million dollar prize fund. The winner can expect to take home up to $200,000, whilst the runner-up often gets something like a car.

In the UK, the Royal Pigeon Racing Association is one group responsible for racing, allowing fanciers to login and submit their race results for the numerous events that they organise during the season. There are others, including the National Flying Club and Scottish Homing Union, whilst elsewhere around Europe and the world, the different nations have their own clubs, with some of the most popular and prestigious being located in Belgium.

Previous Post: « The World’s Biggest Lottery Wins
Next Post: The Female Jockeys That Give the Men a Run for Their Money »