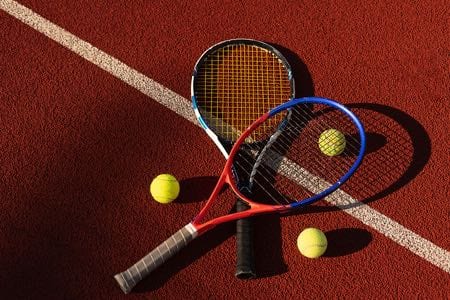 Many of us will watch the major tennis tournaments when they come around, but not all of us will spare a thought for the type of surface that the games are being played on and the difference that that can make. In the United Kingdom, we mainly focus on grass courts thanks to Wimbledon, with some local council courts being more akin to playing on concrete than any of the courses that we’ll have seen during the big competitions.

In short, the biggest difference is the manner in which the ball bounces. Theoretically, the harder a court is, the more the ball will bounce. Courts tend to be one of either clay, grass or hard, with the ball bouncing hardest on the hardcourt and softest on the grass. Different players have their own specialities, with some more keen to play on certain surfaces over others.

Each surface type has its own unique characteristics, which players either get on with or really don’t enjoy. There are also some surfaces that aren’t used in major tournaments but that are still worth a quick mention. The main surface types are grass, clay and hardcourt, with certain venues boasting one but not the others. Here we’ll look at each of them in more detail to gain a sense of why they’re used. 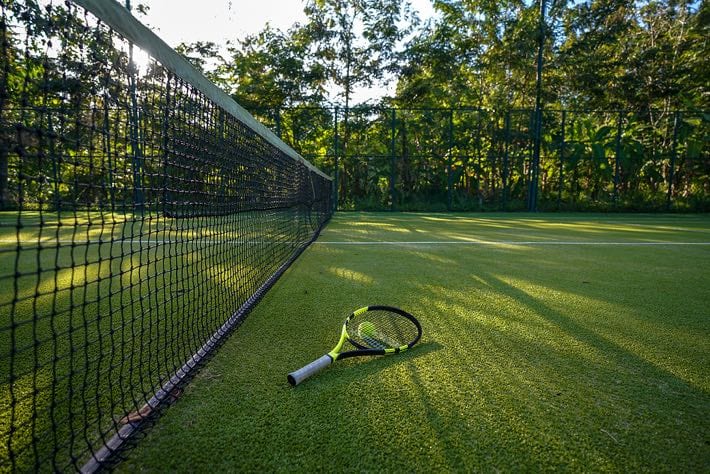 For the British, grass courts are the most famous types of tennis surface for the simple reason that it is grass that is played on at Wimbledon. This surface type is the softest of them all, also considered by many to be the most elegant of playing surfaces. They used to be one of the most popular playing surfaces around, demonstrated by the fact that it was used for three of the Grand Slam events in years gone by.

At one point or another, all of the Australian Open, the US Open and Wimbledon were played on grass courts, though now only Wimbledon remains. Part of that is due to the fact that grass courts require a lot more maintenance than the alternatives, meaning that it’s a lot harder to find grass courts away from the professional environments. Typically, the court is made up of two layers:

Because of the nature of grass courts, the lower level tends to have drainage piping within it in order to allow the top layer to avoid water accumulation. Of course, water on grass courts makes it very slippy, which is why Wimbledon has a roof that can be closed if the weather is not looking good. That being said, the venue requires acclimatisation before play can take place on it even with the roof closed.

The Speed of the Ball

On a grass court, the ball will slide a little bit when it bounces, taking some of the height out of the shot. That doesn’t remove the speed, however, which makes the game overall a much quicker one than on other surfaces. The ball will often stay low to the ground in comparison, meaning that a sliced shot will be a more effective weapon in a player’s armoury than a shot loaded with topspin.

Grass courts lend themselves to big servers, with the serve and volley game being the one that the most effective players opt for. It is often difficult for serve to be broken on grass courts, which is why many of the longest games ever played took place on grass. Indeed, it was part of the reason for Wimbledon’s decision to change the rules about how games could be won during the venue’s premier competition.

In the Open Era of tennis, some of the game’s best-known players have made a name for themselves on grass courts. The likes of Serena Williams, Roger Federer, Steffi Graf and Pete Sampras have all won at least five Grand Slam titles on grass. Martina Navratilova actually won 12 Grand Slam titles playing on a grass surface, whilst Sampras’ seven titles in eight years resulted in many calling him the greatest grass player ever. 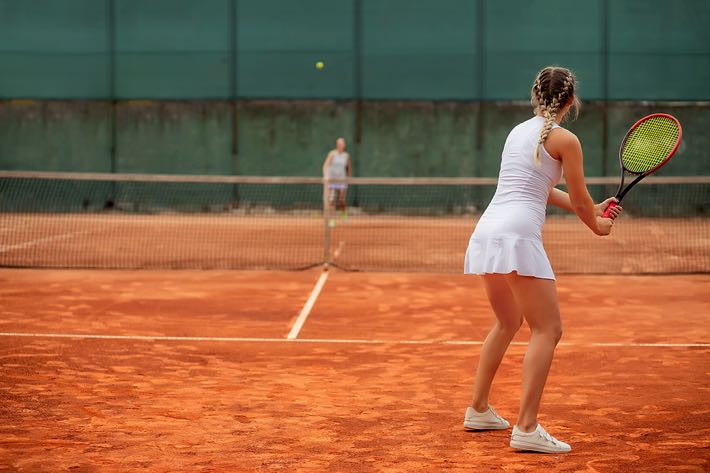 The clay court is notable for many things, not the least of which is the fact that the ball leaves a mark when it lands on the surface. This results in players often disputing calls when they are given out or their opponent’s shot is called in, pointing to the mark in the clay as ‘proof’ of their assertion. It is a court that is most popular in Europe and South America, thanks largely to the fact that they’re relatively easy to maintain than grass.

The top layer of the court is made up of what is known as a crushed aggregate, which is often stone, shale, brick or even some other unbound material. Underneath the top layer is a thicker layer, made of the same material but compacted down in order to make it much harder. The court’s construction means that they are slower and bouncier than a grass court, favouring players that like to play on the baseline.

The loose nature of the top layer of the surface means that players can slide around the court, meaning that athletic players often do well on it as a surface. Those that utilise topspin in their game will find that clay courts favour their style of play, with the balls responding well to their shots when they hit the surface. Rafael Nadal was a brilliant clay court player because the personality of the surface suited his game perfectly.

There are generally two types of clay surface: red and green. Red clay are slightly slower, being popular in both Europe and South America. Green clay courts, meanwhile, are a touch faster and favoured in the United States of America. Red clay is used at Roland Garros for the French Open, as well as on the courts for ATP tournaments hosted in Madrid, Rome and Monte Carlo.

The reality of clay court surfaces is that they require players to have a specific set of skills, meaning that physical conditioning and certain training methods are important when playing on it. Those that are patient and demonstrate a strategic way of thinking often do well on clay courts, given that points tend to last longer than on other surfaces. Avoiding unforced errors can be key to success on the clay.

The aforementioned Rafael Nadal was known as ‘King of Clay’, such is the extent to which he was prolific on the surface. Those that can hit an effective drop-shot are known for their ability on clay surfaces, with names like Thomas Muster, Gustavo Kuerten, and Juan Carlos Ferrero being on the list. Others include Virginia Ruzici, Anastasia Myskina, Iva Majoli, Sue Barker, as well as Garbiñe Muguruza. 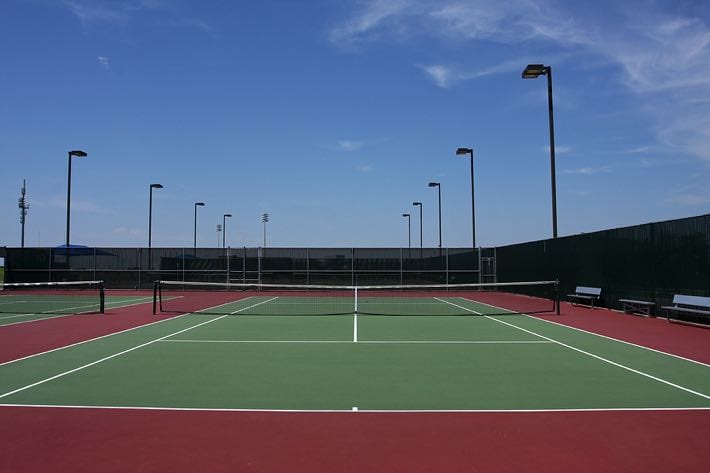 Though known as ‘hardcourt’, the actual surface of this type of tennis court is typically acrylic or polyurethane. Popular in the United States of America, they are made up of a regulating base that is constructed out of concrete, with a top layer of acrylic or polyurethane that is designed to make it friendlier to play on. The courts can be painted different colours, which often makes them look more interesting.

The very nature of hardcourt surfaces means that they can be adjusted with a top layer to make the play faster or slower depending on what the tournament organisers are hoping for. They will be either medium, medium-fast or fast, which is dictated by what the top layer is chosen to be. Sand can be added to the top layer in order to slow play down a bit, though it will make only a minor difference in terms of the bounce of the ball.

The court is a fast one, but the bounciness of the ball means that long rallies will often ensue. This means that the best players on the surface have to have supreme fitness, given that they will need to keep going for a long time to win a point. A good surface for big servers, it allows for aces to be hit on a regular basis. They tend to become even faster when they’ve been exposed to heat and the sun for long periods of time.

The very nature of a hard court means that a player can experience a totally different type of game if they play on the surface on two different days. This means that people have to adjust their playing style depending on how the surface is reacting to the ball. It is a surface that offers few disadvantages in play, which is why it’s such a popular one across the tournament world.

Injuries are quite common on hard courts, which is one of the downsides of it as a surface type. They tend to come about because of the court’s lack of flexibility as well as the fact that it isn’t particularly soft. It comes in the middle of grass and clay in terms of speed, though in Australia a material called Plexicushion is used, which is the slowest type of fast-court surface.

The court is the cheapest and easiest to maintain of all surface types, boasting a good degree of longevity. The truth is that they are also the most neutral of the various surfaces on the list, fitting more styles of play. Whilst players have to have specific skillsets to perform at their best on clay and grass, the same cannot be said of hardcourt surfaces. The ball will bounce as it’s expected too, for example.

Of course, just because there’s no specific skillset required doesn’t mean that players don’t have to be fit and boast good stamina to play on it. Its lack of flexibility and forgiveness also means that it’s not a surface that older players tend to enjoy playing on. It is, however, the most common surface used on the professional tennis tour, so players certainly get plenty of time to experience it over the calendar year.

Whilst clay, grass and hard courts are the most common for matches to be played on, they’re not the only ones.

Carpet courts, for example, are often found in indoor environments and is basically a rubber court. Often used for the purposes of practice, they see artificial turf mixed in with sand. It is a popular surface in Asia, thanks in part to the fact that it is difficult to maintain a grass court in such hot countries. 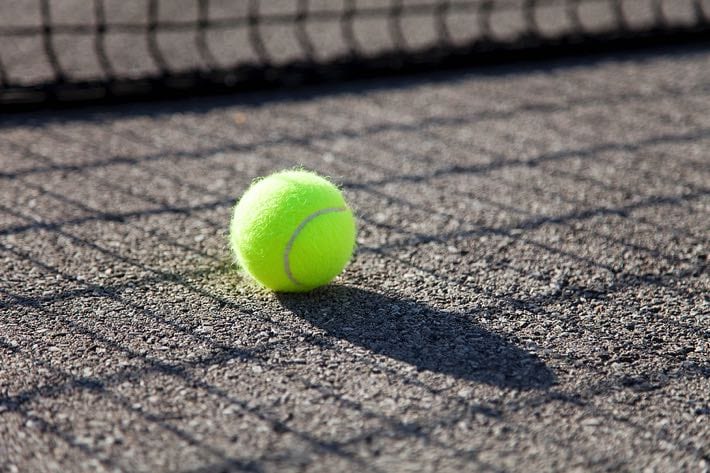 If you were to play tennis in a local park, then there’s a good chance that you’d be playing on an asphalt surface. Often constructed in the same way to hard courts, they then don’t have the final later added to them. They are the hardest court you can play on and don’t tend to be used for professional play. Their cheap nature and the fact that they’re so easy to maintain is why they’re most often found in public spaces. 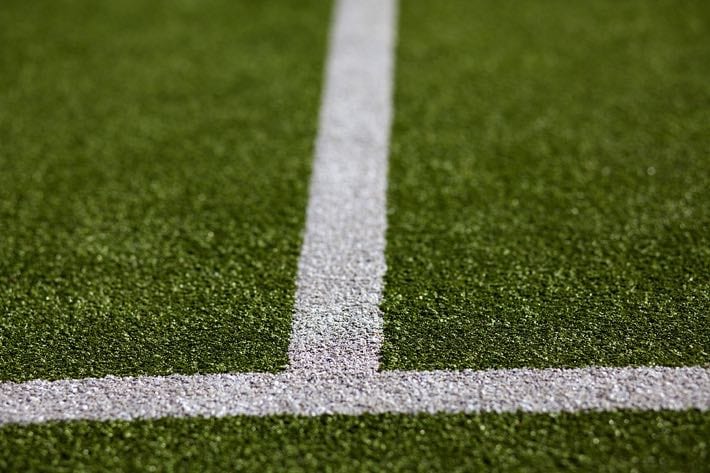 Artificial grass, often taking the form of astro-turf, are common surfaces for private clubs that have games played indoors. Play is most similar to grass, but the very fact that they are indoors means that the entire experience is different. This is true of all court types and it’s why players take time to adjust when the roof is closed at Wimbledon. They are a common court type to play on because they’re easy to maintain.

Here’s a quick summary of the different surface types that are used in professional tennis tournaments:

Previous Post: « Which Players Have Scored Own Goals at the Euros?
Next Post: Which Countries Have the Worst Record at the Euros? »