Betsson has long enjoyed a love affair with the British marketplace, with the only problem being that has been an unrequited love. The Swedish company has made numerous attempts to break into the UK gambling market but has now seemingly decided that things aren’t meant to be and has chosen to back out altogether. The question is, what went wrong?

Betsson’s attempts to break into the UK market included numerous high-profile and expensive sponsorship deals. These included moves to sponsor the likes of Manchester City and Arsenal, only to see the deals fail at great expense to the company. The decision to begin to limit Betsson’s exposure in the UK came in 2018, with the following being a closer look.

The first place to start is with a quick exploration of the Betsson brand. Based in Sweden, the company can trace its roots back to 1963 when Bill Lindwall and Rolf Lundström created AB Restaurang Rouletter. That company later became Cherryföretagen AB and provided slot-based games to restaurants and similar locations in Sweden.

In 1998, Cherry bought a small share in Net Entertainment, a company that was aimed at finding a way into the online gaming market. Cherry bought the rest of the shares in 2000, eventually buying into Betsson three years later. Betsson had been created by Henrik Bergquist, Anders Holmgren and Fredrik Sidfalk and boasted a UK gaming licence.

Cherry officially changed its name to Betsson in 2006, whilst the traditional gaming operation of the company went its separate way. It is the subsidiaries of Betsson that have been used to target the UK market in the past, with many of them having a base in Malta. The best-known of these affiliate from a British point of view is BetSafe.

Betsson’s attempts to break into the British market have been numerous. By the time that the company decided to shut down most of its UK-facing brands it had nine different sites that British customers could sign up to and use. Unsurprisingly, Betsson’s approach to the UK market was a costly one, even though it represented just 3% of its corporate revenues.

The convoluted nature of Betsson’s approach to breaking into the UK market included using three different technology platforms and having four separate licences with the United Kingdom Gambling Commission. The best-known of those brands were Betsafe UK, CasinoEuro, RaceBets, Jackpot24/7 and SuperCasino.

In 2011, the company felt that it had made some headway into the market and agreed to become the official betting partner of Arsenal Football Club, signing a three-year agreement with the London Premier League side. It was hoped that they could garner a user base in the UK by promising fans of the Gunners targeted betting opportunities.

It was a move that the company repeated four years later, this time using one of their subsidiaries to sponsor Manchester City. Betsafe became the official betting partner of the Cityzens for both their men’s and women’s teams, with the bookmaker soon setting up branded kiosks inside The Etihad and having prominent placement for adverts elsewhere.

When Betsson completed the purchase of NetPlay along with its associated brands, the feeling from within the company was the UK would soon become a major market for them. The Chief Executive Officer and President of Betsson AB, Ulrik Bengtsson, said as much when confirmation of the deal had been made public. He said,

With the addition of NetPlay and the continued organic growth, UK is on its way to become one of Betsson’s most important markets. Also, this acquisition is a good example of our strategy to acquire subscale operators where integration with Betsson’s systems and processes can realise synergies.

It was clear, both from the purchase of NetPlay and the comments that were made after the £26 million deal went through, that the UK market continued to be one that Betsson wanted to get a firmer foothold in. Even in spite of the sponsorship deals with Arsenal and then Manchester City, Betsson couldn’t quite find a way to solidify their place in the market.

Whilst the above represents only the tip of the iceberg of Betsson’s attempts to break into the UK betting market, it is representative of a company that was keen to get a slice of what it felt was a very large pie. By 2018, however, the Swedish company had began to see the writing that was on the wall and started to make moves to leave the UK.

The first major noteworthy move came in December of 2018 when the company confirmed that the NetPlay subsidiary was not going to renew its contracts with television broadcasters Channel 5 and ITV. That decision was made in the wake of a decision to close the London office of NetPlay, with the forty or so employees based there facing a consultation over their jobs.

The big issue for Betsson was that NetPlay had a negative affect on the brand, posting a loss of over £5 million in the first quarter of 2018. Whilst the company was publicly saying that it was still confident of making a success of the NetPlay brands, privately there were concerns that the UK market might prove to be a nut that they just couldn’t crack.

Even in 2020 Betsson might well suggest that the company has decided to consolidate what they have in the British market rather than abandon it altogether. It was confirmed in October of 2020 that its market presence in the UK was being significantly reduced, seeing all active brands and their associated licences shifted to its Rizk domain.

Whilst the transformation directives were group wide, the shifting of nine brands to one and the culling of two technology platforms was a significant shift in the company’s previous approach to the British betting market. The initiative was, the company claimed, aimed at ‘increasing efficiency’ by having just one licence with the UKGC.

The fact that the brands other than Rizk that were being shut down in the UK were going to continue to be used in other markets suggested that it was about more than just efficiency. The company had acquired Rizk when it bought Gaming Innovation Group, with the hope being that having just one name in the UK would allow it to make a positive impact on business.

Betsson weren’t overly worried about their position elsewhere in the global betting market. At around the same time that discussions were being had about shutting down the brands in the United Kingdom, the company replaced SportPesa as the sponsors of Kenyan Premier League teams Gor Mahia and AFC Leopards, for example.

Why the Decision to Leave the UK? 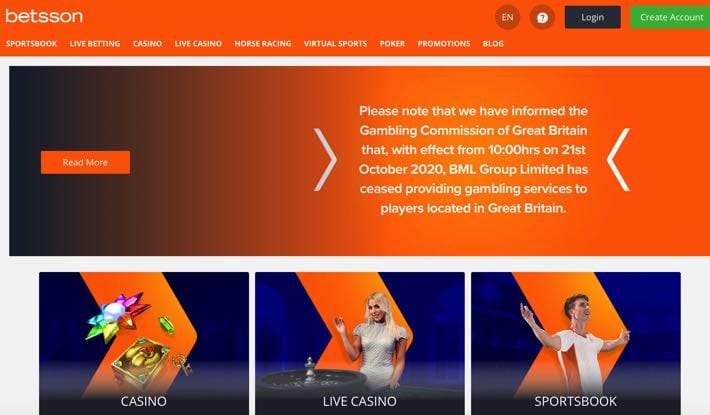 The decision by Betsson to all but abandon the betting market in the United Kingdom seemed a strange one for a company that had worked so hard to break into it in the first place. It left many in the industry wondering why, exactly, the Swedish operator had chosen to shut down its best known brands in favour of opening a virtually brand new one.

The answer seemed to be hinted at by the company in their press releases confirming the closing down of their various sites. Rather than pinning the blame on the manner in which betting companies will have been hit by sports being cancelled due to the global pandemic, which would have been understandable, there were instead references to compliance issues.

The company talked about the ‘significant changes’ that the UK regulatory framework was going through and how these required ‘extensive investments both in technology, regulatory compliance as well as marketing’. It was felt by the group that this was ‘not sustainable’ for the manner in which Betsson was set up to operate in the marketplace.

The fact that one of the brands that Betsson decided to shut down as part of their streamlining approach was under review by the United Kingdom Gambling Commission at the time won’t have escaped the attention of those high up in the organisation. Being able to focus on the emerging US sports betting market will also have helped the decision making.

Ironically, the company was issued a £1.7 million fine by the Swedish Gaming Inspectorate in June of 2020. The Spelinspektionen issued the fine after it felt that a scheme operated by Betsson was conducted through businesses that weren’t licensed to do so. Whilst Betsson rejected the findings, it is interesting that they fell foul of compliance problems in the company’s home country.