One of the sad realities of the gambling industry is that it’s incredibly competitive. New companies seem to launch on an almost daily basis, promising customers the best odds, the deepest markets and the most exciting approach to your betting needs. Yet that very competitiveness can often see companies fall by the wayside for one reason or another.

Sometimes it’s because they simply couldn’t find a market, whilst other times it’s all down to the manner in which the company is run. Regardless, when things go wrong the company can find itself in a difficult situation and they have no chance but to shutdown their operations. That’s what happened to MoPlay, so we’ll explore their rise and fall here.

The story of MoPlay is one of a company that had a star that burnt brightly. Owned by Addison Global, the company launched a sportsbook, games portfolio and casino in June of 2018. It didn’t mess around either, working with SBTech and using the company’s Chameleon360 iGaming platform. Rather than opt to immediately cash in on the World Cup market, MoPlay wanted to target the launch of the Premier League that August instead.

The idea behind the launch was that it would target an audience on the basis of it being a mobile only sportsbook. The theory was that people would be attracted to it because of how much mobile phones were being used by people to place bets, thereby making it a unique experience. They wanted to ‘resonate with a millennial audience‘ and try to ‘push the boundaries of what can be achieved in mobile gaming’.

MoPlay decided to work with SBTech on account of the company’s sportsbook, which it called ‘market leading’, and the API strategy that they hoped would enable the company to deliver something different to their customers. MoPlay was the first brand launched by Addison Global, who were based in Gibraltar. It was created by Juergen Reutter, the Chief Executive Officer, who used to work at William Hill and positioned an experienced management team behind him.

The company immediately began to make waves in the sports betting market, taking over from MarathonBet as the global betting partner of Manchester United. The betting company signed a multi-year deal with the Red Devils, promising to collaborate with the Premier League club to create content and betting markets that would be exclusive for supporters. They also wanted to work with the football giants on ‘co-branded activations’ globally. At the time, the company’s CEO said,

We are immensely proud to partner with what we regard as the biggest sports club in the world. Engaging in such a high-profile partnership so soon after our inception truly puts our exciting new brand on the map. We look forward to working closely with the club’s vast array of talent…in order to reward the passion of the fans and deliver them an enhanced betting experience across the globe.

It wasn’t the first betting partnership that Manchester United had had with a betting firm, having teamed up with Bwin and then MarathonBet from 2015. The announcement of the deal came not long after the English Football League had had to defend the increasing involvement of betting companies. That included the fact that the EFL itself was sponsored by Sky Bet and half of Premier League clubs had a betting sponsor on their shirts.

Certainly both MoPlay and Manchester United were bullish in the immediate aftermath of signing the deal, with the betting company launching the hashtag #MoveOnUp on social media in order to encourage players to sign up. The Group Managing Director of the Red Devils, meanwhile, was excited by the deal. Richard Arnold said that the club was looking forward to working alongside the ‘dynamic company’ and enhancing ‘fans’ gaming experience’.

It didn’t take long for cracks to being to show in the MoPlay facade. Their rise and fall was a surprisingly rapid one. They came into the game with a serious backing, which is what allowed them to go as big as they did so quickly. Free bets for major sporting events like the Super Bowl and the Cheltenham Festival saw a customer base head their way pretty quickly, whilst millions spent on sponsorship deals looked to be propelling them to the forefront of the industry.

Of course, there’s a reason why that sort of thing doesn’t tend to happen very often in the gambling business, if at all. It soon appeared as though the company might have been willing to sign up to such sponsorship deals, but actually paying the money they then owned was a different matter. Rumours began to surface in the industry that they weren’t paying up their sponsorship fees, even whilst good reviews emerged on review sites.

It didn’t take long for those reviews to begin to turn sour, however. By June of 2019, affiliates began to post on websites that people should ‘stay away’ from them, citing lack of payment from MoPlay for customers turned their way. This was in spite of the fact that the company was still officially a sponsor both of Manchester United and of Watford, two well-respected Premier League clubs. That fact meant some affiliates gave them the benefit of the doubt. 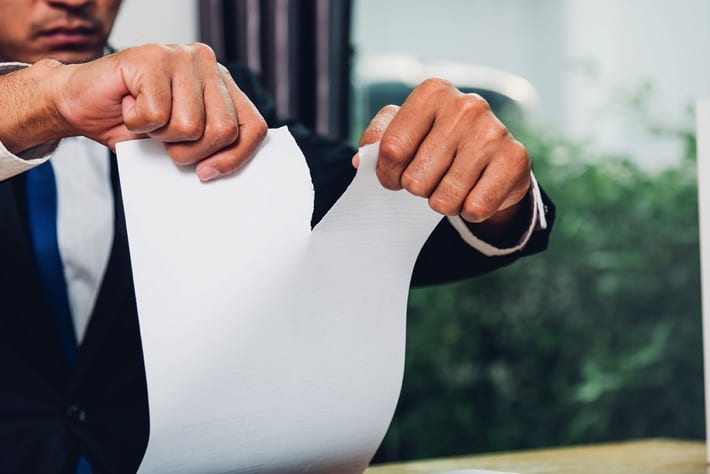 In August of 2019, a story appeared in the Daily Mirror newspaper. It announced that Manchester United had added another sponsor to the club’s portfolio, with Yabo Sport becoming their new official gaming partner. There was s single line that stood out, saying, “United were previously sponsored by MoPlay, but they have now been replaced”. There were no other details about the deal between United and MoPlay in the article.

The following month, Manchester United filed a claim against Select Management Resources, LLC and Roderick Aycox in America. They were claiming that MoPlay hadn’t paid as much as £9 million in sponsorship that had been agreed between the two companies, with the people they filed against being the ones that had acted as guarantors for Addison Global when the company was bering set up. The deal was worth £12,128,692.

United alleged that Addison Global had defaulted on the fourth and fifth payments that they owed, leaving an unpaid invoice of £9,185,692 and 8.75% interest. The filing was very much an indication that Manchester United’s partnership with the betting company was over and done, as had been indicated in the Daily Mirror the month before. As one of the biggest football clubs in the world, they wanted what they were owed for allowing MoPlay adverts at Old Trafford, etc.

Manchester United weren’t the only football club that MoPlay had sponsorship deals with. As well as fellow Premier League club Watford, MoPlay had also agreed a deal with Bundesliga club Hertha Berlin. Soon news began to emerge of numerous clubs suing MoPlay in order to get the money that they believed that they were owed from the company and its guarantors. The bubble very much seemed to have burst after almost no time at all.

Trying to Resolve the Problems

Things didn’t fall apart immediately for MoPlay, even in spite of the various lawsuits that they were facing. Instead, the company went quiet in the second-half of 2019 and began to scale back its operation. That included pulling back promotions to punters and reducing the sponsorship options that it took up. The rumours were that Addison Global was trying to get money from shareholders in order to meet the various conditions of its licences.

The attempts to restructure failed and that eventually led to both the United Kingdom Gambling Commission and the authorities in Gibraltar suspending the company’s trading. MoPlay announced that customers would be able to withdraw funds for three days, but it soon became clear that the company lacked even the funds to allow that to happen. The website went offline, with the company having posted a message regarding ‘clause 9’ of its terms and conditions. 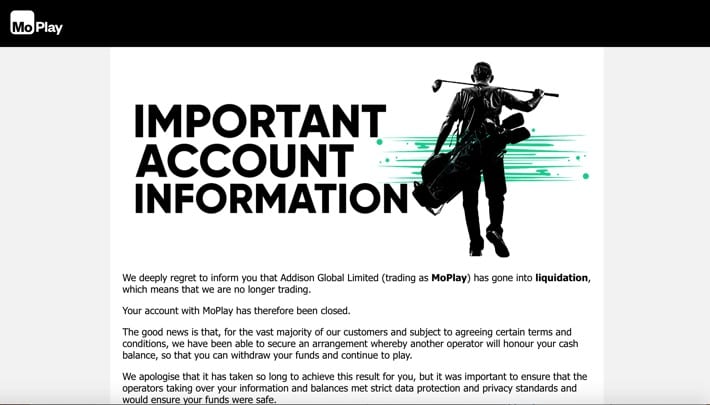 Not long after customers began withdrawing their funds from the MoPlay site, Addison Global realised that it didn’t have the money to be able to honour the majority of the withdrawals. The loss of the various operating licences meant that there was no way that the company could continue to operate. With the financial situation already being perilous and it being illegal for it to carry on in the UK, MoPlay had to be declared insolvent.

Clause 9 of the terms and conditions referred to what would happen to funds in the event of insolvency being declared. It said:

Funds will be held separate from company funds in a mixture of bank accounts and reserve funds which we hold with our payment processors. However, if there was ever a situation where we became insolvent, your funds would not be considered separate to the other company assets and you may not receive all your funds back.

Customers soon felt that they realised which way things would be going, with little-to-no recourse for getting their money back from a company that, to all intents and purposes, no longer existed. They stopped processing all withdrawals, meaning that punters basically just had to accept their fate. One of the key things that people realised was that having a UK Gambling Commission licence doesn’t automatically mean that funds are protected.

There are three tiers of protection when it comes to the UKGC, with Addison Global having the lowest tier. The fact that they were on this lower tier meant that customer funds could be used to pay debts in the event of the company declaring itself insolvent. It’s a big part of the reason why it’s always recommended that you do research into a company before signing up with them and always use a trusted source for your betting site tips.

What Happened to MoPlay’s Player Base?

The company’s player base was bought by Betfred, at least in the United Kingdom and Ireland, and EagleBet won the company’s player base in Germany. It meant that the Warrington-based company was able to add about forty-five thousand active customers to its books, fighting off strong interest from other British betting companies. The likes of BetFred, Star Sports and Virgin Media were also part of the conversation but ultimately missed out.

The good news about the Betfred purchase of the database was that customer’s funds weren’t lost altogether. Those that registered for an account with Betfred could then contact them about withdrawing their funds via the English bookie instead of MoPlay. Betfred got in touch with customers within three days to discuss the manner in which any withdrawal process would be handled, rescuing an otherwise disappointing situation.