Few stories in recent years have had the same traction for the betting industry as the British government’s decision to reduce the stakes that can be played on Fixed Odds Betting Terminals. In terms of pure column inches, there were stories on how much the stakes should be reduced by, what the experts think and why they should be reduced in the first place. One of the biggest things, though, is the manner in which reducing the maximum stake so dramatically will impact on bookmaking companies.

The reason for the stake reduction is largely down to pressure from anti-gambling groups, with the machines being described as the ‘crack cocaine’ of gambling because of their addictive nature and the manner in which such a large amount of money can be spent on them in a relatively short period. The problem for gambling companies is that they allowed them to make a large amount of money, so they’re now in a situation that means a stake reduction will hit them quite hard. How, though, will that affect what happens on the high street?

After Much Debate, Maximum FOBT Stakes Cut to £2

Before we go any further, it’s important to have a quick look at what the government has actually decided to do over FOBTs moving forward. Prior to the government’s decision last May, the maximum stake that could be played on one of the machines at any one time was £100. As players could bet every twenty seconds, that meant that £300 could be lost in a minute.

The Gambling Commission produced a report for the government that stopped short of recommending an overall reduction of stakes below £30, which let many deeply disappointed. When the government released its final decision, however, they opted to reduced stakes to £2 – the lowest amount being considered.

That decision in and of itself wasn’t the end of the debate on the matter, however. When the Chancellor of the Exchequer, Philip Hammond, released his budget in October 2018 he confirmed that the stake reduction wouldn’t take place until the same month in the following year. The reason given for the delay was to give the gambling industry time to react, but it forced the resignation of the Sports minister Tracey Crouch, which resulted in a volte-face by the government on the matter.

It is with great sadness I have resigned from one of the best jobs in Government. Thank you so much for all the very kind messages of support I have received throughout the day. Politicians come and go but principles stay with us forever. pic.twitter.com/rD8bEbCQcK

Why Did The Bookmakers Love Them So Much?

Any machine that allows a company to make £300 a minute will always be seen as a good thing by them, so it’s not overly difficult to understand why bookmakers were such big fans of Fixed Odds Betting Terminals when they could earn them that sort of money. In 2016 gamblers lost £1.8 billion on them, which was a 73% increase from 2009. 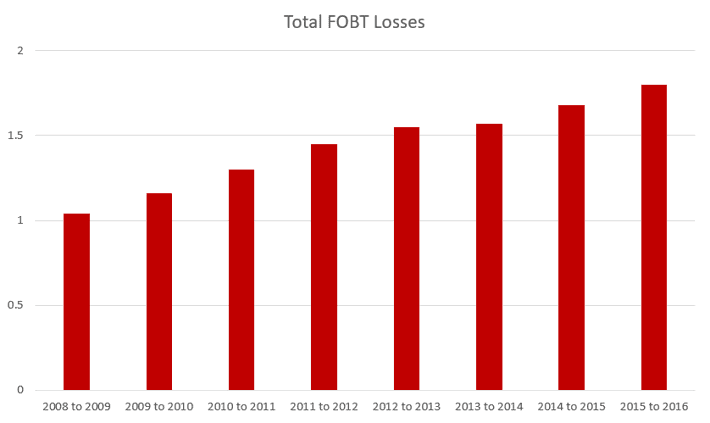 Whilst bookmakers were limited in how many FOBTs they could have in each shop, the machines brought in an amount of money that was around twice the national average wage at in excess of £52,000. It meant that some bookies made more than half of their overall revenue from them and with no sign of that showing down prior to the government’s decision to intervene.

What Are The Bookies Saying?

As you’d imagine, the companies that have been using Fixed Odds Betting Terminals for the past few years are keen to point out how much they will be affected by the reduction in stake. Here’s a look at what some of the industry’s biggest players are saying about the decision to drop the maximum stake to £2:

William Hill has long been a presence on the British high street, but the classic bookmaker announced in August 2018 that it was likely to have to close up to 900 shops as a result of the government’s decision over the FOBT maximum stake. The decision is simply down to maths, with its shops likely to see revenue drop by around 45%, which would make 38% of its shops unprofitable.

If the company ended up closing that many shops then it would likely result in around 4,500 job losses, on account of the fact that it employs 5 people per store. The announcement resulted in shares falling by around 8%. It’s likely that the closures wouldn’t affect the company as much as feared, however, thanks to a decision by the Supreme Court in the United States to end a ban on sports betting in the country that had been in place since 1992.

Paddy Power Were Less Bothered Than Other Companies

It would be untrue to suggest that every company with a high street presence was deeply concerned by the government’s decision to crack down on the maximum stakes. Paddy Power Betfair, which is the amalgamation of the Irish bookmaker Paddy Power and the exchange betting platform Betfair, confirmed in 2018 that they didn’t expect the stake reduction to impact on them much.

In fact, the company even went as far as to suggest that they could benefit from any shop closures that their competitors would need to carry out. Paddy Power is the side of the merger that has a presence on the high street and they said in a statement, “We operate in high-footfall, highly competed locations, which means we are well placed to benefit from competitor shop closures”. A £2 maximum stake would result in a loss of about £46 million, or 2.6% of their overall revenue.

When the initial notion of cutting the FOBT stake was floated, numerous sections of the gambling industry reacted badly. Few were likely to be as badly affected as the combination of Ladbrokes and Coral, however, which both have a high street presence and derived a huge chunk of their overall revenue from the machines. It was little surprise when the responded to the government’s proposed cutting of the stake to £2 with a threat to reduce the amount of money that they pay to various sports industries courtesy of sponsorship.

Ladbrokes are the chief sponsors of a number of events, such as the Rugby Football League Challenge Cup, snooker and darts. They also plough about £3.5 million into horse racing events, which the company said they would reduce in order to cope with the losses incurred by the change to how much money they would earn from Fixed Odds Betting Terminals. The problem with that approach, though, is that they advertise to get custom, so any money saved by not spending it on advertising would surely be lost from the people no longer betting with them.

Last but not least, it’s worth remarking on what the Association of British Bookmakers said about the matter. In a statement released in May 2018, the ABB didn’t pull any punches when out came to how they felt the government’s decision would affect the high street. They talked of 4,000 shops closing and 21,000 ‘colleagues losing their jobs’ as a result.

Perhaps the most noteworthy thing that the organisation said was that independent expert advice suggested that gamblers would still spend the same amount of money on their pastime but would simply shift what it is that they bet on. They also stated that the reduction in stake’s ‘impact on problem gambling levels is far from certain’.