Most people that head to a casino in Las Vegas, Macau or London do so in entirely good faith. Punters will take their cash up to the cashier’s desk and exchange them for chips, knowing that what they’re given in return for their money are genuine chips that the casino values at the same level as the cash that has just been handed over. They go about their betting in an entirely trustworthy manner and when they win on a table or in a poker room they gather their hard-won chips and go to exchange them back for cash.

What people will rarely think about is whether or not the chips that they’ve gathered up are actually genuine ones or not. Whilst the majority of bettors are good faith actors, there will always be some nefarious types that look to take advantage of even the slightest drop off in casino security. This can include the manufacturing of fake casino chips, which they will attempt to get into circulation by putting them forward as normal chips just as regular bettors would do. The question therefore becomes, just how secure are casino chips?

How Much Is the Chip Worth?

The first thing that a casino will want to consider is the denomination of the chip that they’re looking at dealing with. Modern casinos have the ability to put RFID, or Radio-Frequency Identification, technology into their chips. The problem is, this technology is not cheap, meaning that a casino won’t want to be putting it into the chips that are only worth relatively small amounts of money. If a casino has chips with £1, £2, £5 or £10 denominations, for example, then the likelihood is that they will not have RFID technology in them.

Once you pass the £25 mark, however, it becomes more important for casinos to ensure that they are protected. The level of the casino will also dictate which denominations will start to see RFID technology introduced. A casino that tends to only deal in small amounts will be much more keen to ensure that they are protected at even the low levels, whilst casinos that are used to high-rollers operating on their casino floor will be much more worried about the chips that are worth a lot more money. 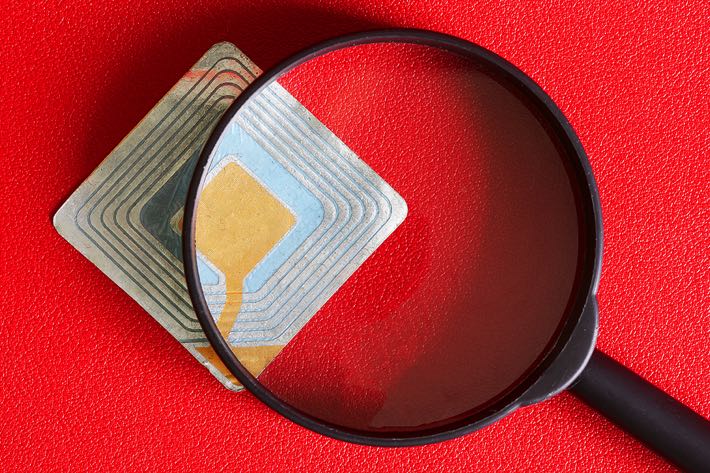 Radio-Frequency Identification, often talked about by using its acronym of RFID, is a form of technology that has become more and more common to use in our everyday lives. When you go to pay for something using your phone on a touch-free pad, for example, that is taking advantage of RFID technology. RFID tags or smart labels can be put on virtually anything, so you’ll often see it used by people looking to keep track of their keys, say, or wanting to know where their mobile phone is at any given moment without having it turned on.

In essence, RFID tags are similar in nature to barcodes, insomuch as they contain information that you can only find out about if you scan them with an appropriate device that knows how to unlock said data. The big difference is that RFID tags don’t need to be in line of sight in order to read the information, instead being part of the group of technologies that come under the banner of ‘Automatic Identification and Data Capture’. That is to say, information is automatically captured when using RFID tech, so you don’t need to actively do anything.

The reason Radio-Frequency Identification is relevant as a technology as far as we’re concerned is that it is now common for it to be used in casino chips. It is not new technology, having first been touted by the European Central Bank as being something that they were considering putting in their bank notes back in 2003. A year later and casino chips featuring RFID technology were launched, giving casinos the ability to spot counterfeiters, as well as to more closely monitor the behaviour of gamblers in their venues.

The small silicon chips, which do not need batteries, were entered into casino chips in order to allow a unique identification number to be read when an RFID reader asked for it. Depending on the sort of tag entered into the chip, the information can be read from centimetres to metres away. The initial tags used in casino chips were just 0.1 millimetre thick and 0.4 millimetres square, meaning that they were more than small enough to be added to a chip without any major changes needing to be made to their designs.

How to Tell If Your Casino Chip Is Real 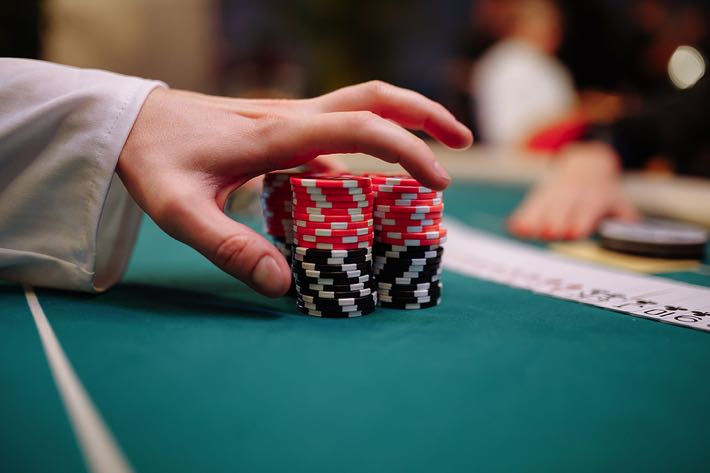 It is an obvious thing to say, but each casino chain has its own method for making, marking and identifying casino chips. Yes, there is a standardised nature to casino chips that mean a lot of them bear similarities to each other, but there are also plenty of differences that help them to stand out. For starters, even somewhere like Las Vegas will see a big difference in the weight of casino chips, ranging from 8.5 grams to 10.6 grams. Also the material that they’re made out of isn’t always the same, whether they be plastic, clay or ceramic.

There are differences that are glaringly obvious, such as the name of the casino being stamped on them all. The stamp is the equivalent of pounds sterling or US dollars, in the sense that they will only be accepted in the ‘country’ that they come from. It is unlikely that you’d be able to pay for your meal in a London restaurant with a $50 bill, just as you will struggle to get the MGM Grand to accept your $50 chip from New York New York. If the chip that you have doesn’t have a logo of any kind on it then you’re going to struggle to get it accepted anywhere.

One thing that people might not think about when it comes to poker chips is their colour. In the past, the colour of chips would differ depending on the casino that you found yourself in but this has become more standardised now, especially in cities like Las Vegas. At the time of writing, this is what the colours tend to represent:

It might seem as though that is just random information, but in actual fact it helps casinos deter those that would wish to behave in a nefarious manner. For starters, the exact shade of colour isn’t always easy to replicate, so counterfeiters will struggle to get it perfectly right. That might not seem all that relevant when you’re looking at one chip on its own, but put several chips of the same colour together and you’ll soon start to notice when one stands out from the crowd, helping dealers and croupiers to spot the fakes.

The reason colours were standardised on the Las Vegas strip was because casinos having different colours from each other would allow bad faith actors to take advantage. Imagine if a casino had black as their colour for the $1 chip, say, whilst all other venues had that as the colour for their $100 chips. Someone with evil intent could mix two or three $1 chips from that casino in with the $100 from another casino, creating a big stack that appears to be worth $1,000 but is actually worth $703.

As you might imagine, it is in the interests of a casino to ensure that counterfeit chips cannot be used on the casino floor. As a result, there are numerous things in place to stop counterfeiters from getting away with their evil plans. For starters, casinos keep track of players that tend to play with high denomination chips. That is to say, if you go up to the cashier’s desk and ask to change £20,000 into high value chips, a note will be made on the casino’s system that you’ve got a number of large value chips in your possession.

As a result of this, someone wandering in off the street and trying to place bets with £1,000 chips will automatically be flagged up on a casino’s system. If their name and information doesn’t match the details of one of the people that the venue already knows about, they will be politely asked to prove who they are and where their chips have come from. If they’re unable to prove as much, they will be escorted from the venue or even reported to the police, probably in a not very polite manner.

Casino chips weigh an exact amount, have specific designs and are usually marked with ink that only shows up under ultra-violet light. All of these things are difficult to fake and that’s before we even think about the aforementioned RFID technology that is used on modern chips. As a result, it is likely that counterfeiters would have to opt for chip values of £25 or less, which then presents them with another problem: how do you launder vast sums of money when the biggest chip that you can use is worth such a low amount?

Regardless of where in the world you find yourself, casinos are monitored so closely that it is virtually impossible to do anything without security teams knowing about it. Any player playing for large sums of money will be watched closely by security staff, so the likelihood is that you’re simply not going to be able to launder money in an efficient manner. Realistically, entering counterfeit coins into a casino’s run of chips is pretty much a no-go, so the likelihood is that the chips that you’re using are secure and valid.

What Happens When Counterfeiters Are Caught 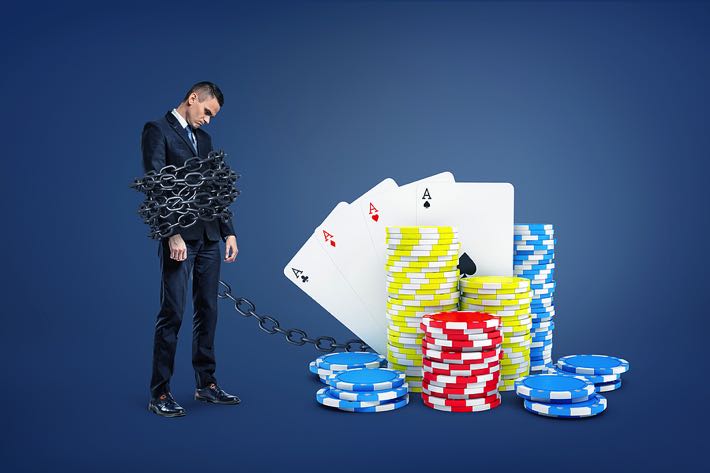 The simply fact is that no amount of measures put in place by casinos will stop people from trying to counterfeit casino chips. It is too much of an easy win as far as bad faith actors are concerned to try to counterfeit casino chips, so they will continue trying to get better at it. At the same time, casinos will carry on doing what they can to stop people from getting away with it, meaning that the dance will go on and on forever. Even so, it is worth thinking about what happens to the people that caught trying to pull a fast one.

That is exactly what happened to Leonard Martin Stone in July of 2004. The 45-year-old man from Las Vegas itself was arrested and charged by police with the crime of passing on counterfeit casino chips at venues on the strip. The man, also known by the name Leonard Morgan Hairston, found himself being charged by the Nevada State Gaming Control Board with manufacturing and possessing a cheating device as well as burglary, which were all felons in the state at the time.

He had printed off the logo for the Freemont-Hotel Casino and stuck it to a chip from the Dunes Casino, which had closed down in 1993. That was discovered when the sticker began to peel off, but he tried a similar thing at Fitzgerald’s Casino, only for the cashier to notice it was fake and call security. Given that conventions for manufacturing or possessing cheating devices can involve penalties of up to six years in prison, as well as a $10,000 fine for each count, Stone might well have wished he’d just tried to win things the legal way.

Previous Post: « What Are the Biggest Rollover Jackpots in the National Lottery?
Next Post: Why Do Slot Spins Have a Minimum 2.5 Second Time in the UK? »