Singing about Las Vegas, Elvis Presley uttered the words ‘Bright light city gonna set my soul, gonna set my soul on fire. Got a whole lot of money that’s ready to burn,
so get those stakes up higher’. Whilst he was referencing the gambling that takes place in Sin City, it could just as easily have been a reference to the amount of money that was spent in powering the mirage in the middle of the Nevada desert.

With pretty much every single casino on the Las Vegas strip having bright lights flashing 24 hours a day, seven days a week in order to encourage bettors to enter their premises, it’s fair to say that it’s a place that effectively burns through money. That’s to say nothing of how much it costs to run all of the machines inside each of the venues, which also use up electricity. The question is, is Las Vegas exactly what it seems?

The Gambling Capital of the World

In a typical year, the 150-plus casinos of Las Vegas welcome more than 41 million players. That is some growth from the original idea of it being a place that a few people could turn up to in order to bet a few dollars back in 1905. Whether it be table games or slot machines that you favour, there will be a casino in Sin City that not only offer what you’re after but is also themed around something that you’ll enjoy.

The Aria is well-known for its slot machines, whilst the Golden Nugget offers table games in an old-fashioned casino that has stood the test of time. For punters that enjoy a high-stakes game, meanwhile, the Bellagio is the place to be. Regardless of your personal penchant in gambling terms, the likelihood of you going to Las Vegas and being disappointed by what’s on offer is slim to say the least.

Of course, the fact that Las Vegas is a gambling Mecca comes at a cost, not least in an environmental sense. The bright lights of the casinos use up as much as one-fifth of the total energy of the entire city. When you consider the lengths that the various casinos go to in order to outdo each other, that’s not exactly a surprise. The Luxor blasts a beam into space that uses bulbs of about 40,000-watts in energy.

Further down the strip, the Bellagio has a water feature that sends the water more than 450-feet into the air and costs the casino about $5 million a year to run. In other words, cost is no object when it comes to a casino’s desire to encourage bettors to enter its premises and spend their money. Some casinos have electricity bills that cost them in excess of $350,000 a month, with about a third of that spent on slot machines.

Back in 2006, a new development called the City Centre was being built next to the MGM Grand. According to an Environmental Architect named Professor Sue Roaf, each new resident needed 20,000 kWh of electricity per year, which amounts to 400,000 megawatts at a cost of $40 million a year. As a comparison, the average home in America used 10,660 kWh per year at that time, so it’s not exaggeration to call the casinos energy guzzlers.

The Move to Sustainability 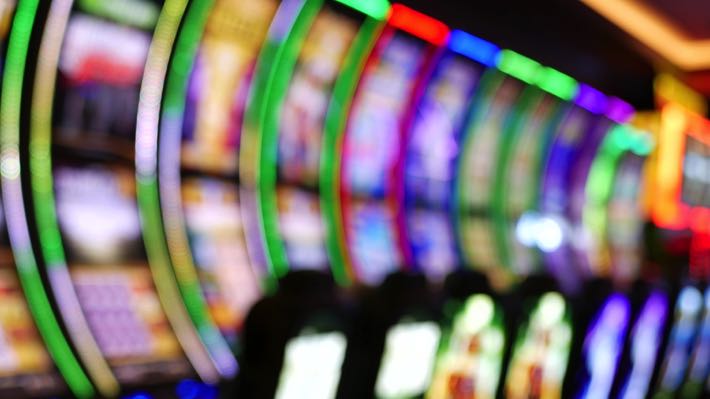 The major corporations behind Las Vegas’ more prominent hotels and casinos know that the city is using energy at an incredible rate. That’s why there has been a move to make the place more sustainable for a number of years now. In 2016, for example, the Huffington Post published an article entitled, “The City Of Las Vegas Is Now Powered Entirely By Renewable Energy.” It wasn’t entirely true.

What it was actually referring to was the city’s facilities, such as government buildings and street lights and so on. It was obvious to anyone reading the piece that the casinos weren’t included in this bold statement, even if the headline gave the impression that they were. It was the conclusion of a decade-long attempt to move to clean energy, including by partnering up with the public utility company NV Energy.

All government buildings might well have been powered by renewable sources but the article stated that ‘many residential and commercial buildings’ were not. The move for the government buildings to use renewable energy was possible after Boulder Solar 1, which is a huge solar array based in the southeast of the state of Nevada, went online and began to be combined with other sources of green energy from the local area.

The state of Nevada is one that produces a lot of renewable energy, not least thanks to the 500-plus megawatts (MW) of geothermal power it is home to. Yet in September of 2016 about 70% of the 3.3 million megawatt hours of energy produced in the state came from natural gas rather than solar. Given that about three-quarters of the state’s population live in Las Vegas, the lack of renewable energy used there is telling.

Casinos Are Heading in the Right Direction

Though casinos aren’t currently using renewable sources to power their energy needs, they are at least conscious of what needs to happen in the future. In 2011, the city in general made a move away from neon lights and replaced them with the more energy-friendly LED alternatives. Whilst the green benefits were clear, the move was largely facilitated by the increase in options given by LED lighting.

Neon lights are able to provide fewer than 100 colours, whilst LED lighting can offer millions of options. So, it was that the neon signs that had been used in the city since 1923 slowly began to fade out of usage. It says something that many of the lights at Neon Museum’s Boneyard Park are actually LEDs that have been made to look like neon lights of old. It was a big shift, but had been a long time coming.

In the summer of 2020, the majority of America’s top CEOs signed up to the idea that they needed to be more society-minded than just thinking about the net win that they generated for their shareholders. This was a philosophy embraced by the Chief Executive Officer of MGM Resorts, saying, “The rationale is clear: Large, successful companies have a significant impact on the lives of their employees, communities, and the world—and they have a duty to do right by each.”

He went on to point out that, for the Strip, this includes a ‘growing focus on social impact and sustainability’. He was quick to point out that this will likely turn the city into something of a paradox that is ‘known for frivolity and excess that is fueled by socially and environmentally conscious policies and programs.’ Part of this desire to use energy sources that are renewable led to some of the biggest casinos leaving the electrical grid.

Writing in 2020, the CEO of MGM Resorts pointed out that the company was moving to break ground on an off-site solar farm that would be able to power 90% of the company’s daytime energy for all 12 of the casinos on the Strip by the end of the year. It was, he said, just the tip of the iceberg in the manner in which the various top-level resorts were looking to improve their environmental responsibilities.

Moving to Help the Environment

Las Vegas will always be a city of excess and the reality is that it will almost certainly be decades before the city will be able to move to operating in a fully environmentally friendly manner. That doesn’t mean that efforts can’t be made in the short-term to improve how it operates, including the manner in which Caesars hotels attempt to repurpose whatever the can, starting with used soaps.

Soaps that have been used by guests at hotels owned by Caesars Entertainment Corporation are collected and melted down in order to create new soaps that can be given to people in need in locations, such as the Philippines and Guatemala. Old curtains have previously been turned into tote bags and sold for charity, whilst old towels and pillowcases have been repurposed as cleaning rags.

There are a myriad of small changes that have been made across casinos in Las Vegas, such as wine being pumped from kegs rather than opening bottles. If a room is unoccupied then the air conditioning and lights are turned off, whilst even the vending machines behind the scenes don’t have lights turned on, which reportedly saves casinos about $25,000 ever year in energy bills.

Caesars properties also use a team that separates out all of the garbage into recyclable and non-recyclable material, which is a more sure-fire way of recycling as much as possible than asking guests to put them into specific bins that serve the purpose. Whilst this might not seem like much, it’s worth remembering just how big Las Vegas is and how many millions of people head there every year, meaning that it will make a difference.

Does Environmental Work Matter in a Land of Gambling? 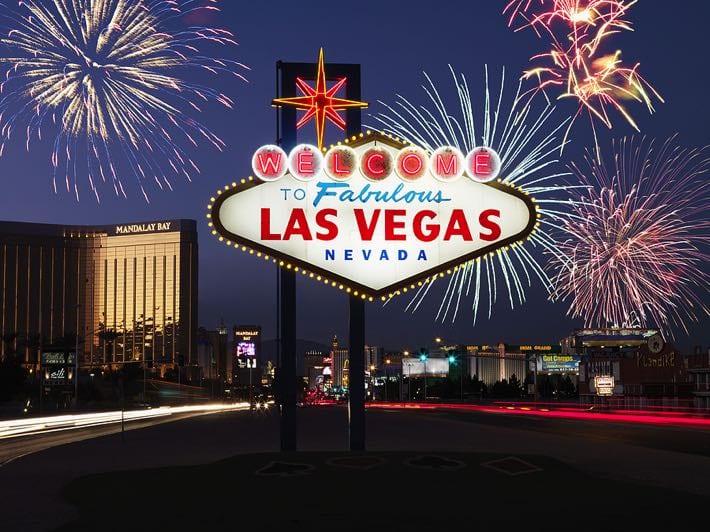 The question that many aren’t asking around the environmental impact of Las Vegas is whether anyone should be all that surprised that the companies that run mega-casinos aren’t too worried about their impact on the environment. Whilst they might all be making moves to improve what they can do to limit the damage that they do environmentally, none of them would choose the green movement over their own net win.

If a new resort was opening up in Las Vegas and the owners were told that favouring environmentally friendly working methods would cost them an extra $50 million and result in 5% fewer customers attending their casino and staying in their hotel, it doesn’t take a genius to figure out that they would almost certainly abandon such plans. Las Vegas essentially exists solely to cater to gamblers and take their money.

In the words of Les Bernal, the National Director of Stop Predatory Gambling, “The entire business of predatory gambling is based upon getting people to be irresponsible. From a big picture stand point, casinos produce one thing: inequality. If their business is based on producing inequality, it’s impossible to also be a company that does social good.” In other words, the sustainability of a casino isn’t all that important.

The small changes made by the groups that own the world’s biggest casinos might well make a difference, but they’ll only carry it on if they’re forced to or it saves them money. None of the lights, the slots or the other things that use bucket-loads of energy are leaving Las Vegas any time soon, with the hope being that developments in various fields allow them to make Sin City greener at minimal cost to those that pay the bills.

Previous Post: « How Long Do You Have to Claim a Winning Bet?
Next Post: What Is the Betfair Starting Price (BSP)? »