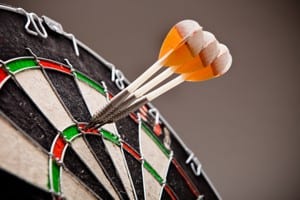 Ten years ago the ability to bet on darts would have been limited to say the least. The sport was far from struggling, but it never really had any serious coverage beyond a lot of the major tournaments which in turn, discouraged bookmakers to really put much time or effort into making comprehensive markets for a substantial number of events.

How times have changed! Darts is probably as big as it’s ever been. The likes of Sky Sport has been at the forefront of this revival and not only are more people than ever playing the game, but more are watching the game at home. It’s not uncommon to see a darts tournament of some form on the old wireless pretty much 52 weeks of the year. Once more, the game has been ‘glamorised’ and it’s colourful, entertaining outlook it carries seems to relate to the majority of its audience.

Any increase in sports popularity always seems to get the bookmakers attention. Darts is very much a working class game as well, which is probably why it’s become so popular in betting shops and online around the world. Choice is always a good thing if you are a punter and if choice is on offer, it often means bookmakers work that little bit harder to get you through their doors and using their betting client.

What we’ve got below is 5 bookmakers that we think will fit a wide range of punters. Whilst we always rank these bookmakers in terms of which ones we think are best, we try to give you the facts to make your own decision. What works best for one person, might not for another, so bear that in mind when reading through our picks for the best darts betting sties.

At the top of the pile for darts betting comes Coral. These guys have come a long way over the last couple of years and whilst they have been around for donkey’s years, they are now starting to compete with some of the bigger boys in the industry. We honestly think that one of the reasons behind their success comes down to giving new leases of life to betting markets that never used to be all that popular, with darts being a prime example of that.

We loved the range of markets on offer as well. You aren’t just simply confined to betting on the outright winner of a match or even the winner of a tournament. Their pre match betting allows you to take on markets such as handicap betting, correct score, total legs, total 180s, most 180s and so many more. In fact, some games include over 20 markets just for one match! Bare in mind, this doesn’t include their live betting markets that are just as comprehensive.

BetVictor are just one of those bookmakers that are so well rounded these days. There’s few sports that they don’t cover well and you’ll be delighted to know that darts is actually one of their stronger sports these days.

The darts sections open up with an overview of upcoming games that you can bet on and ante post markets for future tournaments. They also include an enhanced specials section for both tours that includes markets such as a certain player to win a major or to qualify for a certain event, that sort of thing. It’s not your mainstream type of betting market which is definitely something we like to see.

The site really comes to life when you enter the head to head matchups for a particular game. The top section of this page includes a little graphic showing tournament 3 dart averages, % doubles hit, head to heads and last 5 results. It’s a fantastic little feature and something that actually allows you to make a more informed decision about your bet. What’s great is that all of this information is linked to the markets representing that match as well; of which, the site performs admirably. You can bet on handicaps, checkouts, maximums, maximum finishes and correct score markets, to name but a few.

Ladbrokes are actually one of the reasons why darts has become so popular. The sponsor the World Championships and whilst this single sponsorship alone doesn’t automatically increase the profile, it’s companies like Ladbrokes who plough the money in in terms of prize money and in turn, generate a buzz around the game.

This is one of the main reasons as to why we were so surprised to see a slightly ‘thin’ darts betting section on site. They cover the major tournaments and the majority of the ones not quite at the same standard as the majors but there is very little depth to the markets. On the same game that BetVictor were offering over 20 potential markets, Ladbrokes have just three, which says it all really.

They only managed to save face because of how well their darts section is laid out and we were pleased to see that live betting is integrated with the main betting section as well. They are also pretty well priced to be honest and will give any of the bookmakers in the top three a run for their money.

Betfred failed to really capture the imagination and fall a fair way short at the bottom of our five picks. Coverage is actually not too bad, but they only show markets for tournaments that are in running. Whilst this isn’t a massive issue for some, it does make the page look very thin on the ground and we would like to see some early markets, even if just for the majors of the year.

Once into the games you get a good array of markets to bet on including correct score, most 180s and highest checkout. These are all pretty common across the board but we really can’t help but fail to get excited about the design and layout of this section. It’s always going to be a solid pick, but without any massive incentive to really use it as a main darts betting base.

How to Bet on Darts

We’ve mentioned about the popularity of darts has continued to grow and whilst it will never lose that mantel of overweight men playing in smoky public house tag, the game is now far from poor mans sport.

This has all had a positive implication on the betting outlet for darts and now its easier than ever to get a really solid range of markets to bet on. What you must first do is establish where you want to place your bets. Depending on what you want from a bookmaker will ultimately depend on which bookmaker to choose. We can’t make this decision for you, although you know which ones we recommend now.

After your bookmaker has been chosen then you can now start to look at ways to maximise your profits. What we have found is that a lot of bookmakers are pretty poor to really find out which bets are going to be of value. This is why you will need to use outside sources in order to do so.

One of the best tools we have found is to simply follow as many people within the darts industry as possible on outlets such as Facebook and Twitter. Whilst these guys might not be offering tips as such, an innocuous Tweet such as “Really fancy Bob tonight, he’s been playing well and not getting the luck of the draw” might just spring you into action to investigate further. It takes a bit of time and effort, but you are finding out information form the best, and for free!

One thing we often get disappointed by is bookmakers inability or lack of want to produce several betting markets. Some do and some don’t, which makes it frustrating when you know how simple it could be for them.

The main market is always going to be the outright winners market. Now, more often than not this will be a simple win or lose situation, but there are tournaments, such as the Premier League that do add draws as part of their format. It should be pretty easy to see from your bookmaker if a draw is part of the equation.

Choosing the correct leg score is probably the next popular market and for this you must choose the exact score at the end of the match. One thing we will say about this market is that you need to note which games include playoffs. Some will require a player to win by two clear legs, meaning the outcome of this market could potentially be huge.

In the event that a player does not start the intended match for whatever reason then the ‘non-runner no bet’ rule will apply. This essentially means that all bets are off and will be refunded. If a player does not complete the match then the player progressing to the next round will be deemed the winner.

For bets placed in-play and the match does not find a conclusion or a player withdraws then all bets prior to settlement will be refunded. If bets in these markets have been placed and have been settled then this result will stand.

In matches where the game ahs not been completed after a player withdraws then bets from the individual player average, player checkouts and first leg/set markets will all become void.