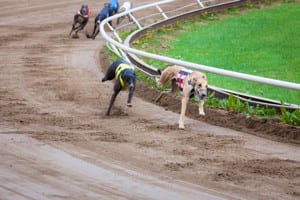 Greyhound racing has been one of the most popular sports to bet in the UK for a number of years now. In fact, it rivals that of horse racing in terms of the coverage the sport gets. These days the sport isn’t as popular as once was, but it still pulls in a large number of punters to bet on races from around the world.

Just a couple of minutes on any of the larger bookmakers will show you just how popular it is, with a number of them ranking it as one of their biggest sports. Even thought the reported popularity of greyhound has diminished, its been the bookmakers who have been a part of the figure heads to revive the sport for their punters. It’s not uncommon to see bookmaker sponsoring races and there are some which actually sponsor the whole race track.

What we’ve found is that greyhound racing to bookmakers seems to be a bit more of a condensed version of horse racing. Everything from coverage, betting markets, promotions, stats and even live streaming is good, but not quite up to that of horse racing.

Coral are a great choice for betting on greyhound racing due to their overall coverage. The homepage sometimes includes quick links and previews to their more prestigious races whilst clicking on the greyhound section will give you a much more detailed overview.

Once in, the first section you will come across is their ‘upcoming races’ section and this points you in the direction of the next couple of races that are taking place. It will also make you aware if these races are available on their live streaming channel, of which a lot of the higher profile meetings are covered in good detail. Once you delve further into the race cards of the smaller races then you will be able to see which are featured for live streaming.

As with a lot of Coral’s sports, they include a number of interesting sections that you can check out including easy picks, futures, specials, results and even virtual. We loved the fact that you could build your won racecard if you wanted to including the races from across the board that you were looking to bet on. Not enough bookmakers include this feature and it’s something we found particularly impressive.

As a final point with Coral, we just wanted to point out that they a number of money back specials throughout the year. A one they have been running for a while now is the money back if your dog loses by a length or less on Sky Sports live races.

ToteSport are better known for their affiliation with horse racing, but their sports betting section does include a really solid greyhound section as well. The initial HUB allows you to see all the races that are taking place that day and then choose from races taking place at a later date. We found the addition of being able to build a custom racecard a really nice feature and also the fact this was linked into any results from the same day appositive.

The racecard’s themselves were probably the highlight of the site. Straight away you can see a bright, colorful card that include name of the dogs running and also the current and starting price. You can select between forecast or tricast bets if you wish and then select between straight, banker and combination bets.

It’s one of very few bookmakers that actually have teamed up with an out side source in the Racing Post to bring you a preview of the race and also each dog. This is something that a lot of bookmakers do for horse racing, but it’s actually quite rare in greyhound racing. There’s also the option of live commentary but this is linked with ToteSport’s racing radio channel so not every race is featured on this.

The site has come up trumps with their betting section and they are a great alternative to the more mainstream bookies.

It’s often clear pretty quickly as to how much of a regard bookmaker hold greyhound racing in when you enter the homepage and see if there is any immediate coverage. BetVictor don’t actually have this (for the most part) and the sport isn’t even listed under their ‘top sports’ coupon.

Similarly to Coral, we liked the fact you could choose the races you wanted to bet on to make a custom racecard, but unlike Coral we found the number of meeting covered to be pretty small.

The racecard is very simple and to be honest, apart from actually seeing the price of the dog you want to bet on, leaves a lot to be desired. Whereas with the two bookmakers listed above you could check out all sorts of information, BetVictor have decided to go down the simplistic route, which isn’t necessarily a good thing in this case. If you cant get access to the other two bookmakers, then BetVictor is a reasonable choice, but they won’t be winning any awards any time soon for innovation.

Betfred are one of the reasons why greyhound racing is still going strong today. They actually sponsor quite a large range of events up and down the country and the make the prize money worth winning. It’s companies like Betfred who keep the sport fresh and whilst there is prize money on offer, the sport will continue to flourish.

However, their betting site isn’t the most comprehensive when it comes to betting on greyhound racing. The basics are there and the site includes a number of meetings from around the world. It lacks somewhat in terms of additional features and there is little to really choose from after simply being able to place your own bets.

The race card includes the name of the dog you are looking to bet on and then the price. We liked that they included the forecast/tricast market as well, which made things seem to run a lot smoother than we initially thought.

How to Bet on Greyhound Racing

Greyhound racing has always lived in the shadow of horse racing somewhat and to be honest, it likely always will. But that doesn’t mean to say that there is not enough action to get teeth stuck into, in fact far from it. There are literally races every day of the week, although the quality of these races will vary somewhat.

One thing that reviewing the bookmakers we have to find the best bookmakers for greyhound racing was just how limited the information is on there for the casual bettor. For example, football and horse racing will generally have huge statistics sections and form guides to help you select which bets might be most valuable. On top of that some even get ex-professionals to blog about bets and just generally give the sports a boatload of coverage meaning punters need not look elsewhere for their research.

Greyhound raving works a little differently to all that, in that you need to put the work in to get the results you are after. There are however, plenty of resources online to get betting tips and race information. In fact, if you already bet on horse racing and use something like the Racing Post, then these guys are about as good as you are going to find.

One of the downsides to betting on greyhounds is that the number of betting markets on offer are severely limited, especially in comparison to the likes of football or even horse racing for that matter. Whilst this undoubtedly has its drawbacks, there are positives to it meaning you can concentrate on just a few markets to find value. Sometimes even we will admit having over 100 markets to bet on for each football match can get slightly overwhelming.

The main and most obvious market is that of betting on the outright winner. It’s very simple in that you simply back the dog that you think will win. If your dog finishes anywhere but first, then you lose. A link to this market is each way betting. This splits your bet into two and you have half of your stake on the win and the over half on the dog to place at a fraction of the starting odds. It’s pretty common to see that most bookmakers will pay out first and second as places at ¼ the odds.

Forecast betting is something has had a bit of a revival within the industry and it’s now a pretty common betting market for most bookmakers. This requires you to pick the dog, which you think will finish first and then the dog that you think will finish second. As an extension to this you can bet on a tricast that means you need to correctly select 1st, 2nd and 3rd to win.

Some bookmakers include a banker bet that means you select the dog you think will finish first and then any dog to finish second. The combination bet allows you to select two dogs to finish either first or second without specifying a position for each.

As with any sport, there are a number of rules in which you need familiarize yourself with when it comes to greyhound racing. One thing we will say is that each bookmaker will likely differ in the rules that are set out. It’s for this reason why if you have a query we recommend contacting the bookmaker directly and simply use the rules below as a general guide.

The first thing to consider is that for the majority of bets you are betting on the trap, rather than the dog. This means that whatever dog is represented in that trap will be your bet. If the dog is replaced at the last minute then your bet will carry over to that dog, unless you decide to void your bet and your money will be returned.

Rule 4 is something that also is used in greyhound racing along with horse racing. It’s been put in place to allow bookmakers to alter the odds should a dog be removed from that race at the last minute. If for example the 2/1 favorite withdraws then the next best dog, originally priced at 5/1, will then be cut, because it wont reflect on the rest of the field fairly. This is a mathematical science in that depending on what starting price the dog was, will mean in an exact cut to a predetermined betting price.