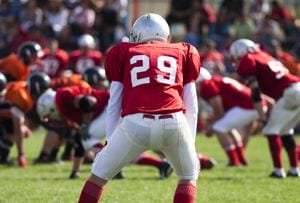 Whilst it’s undoubted that American football is much more popular in the US then say the UK for example, the sport is actually one that has developed quickly on a more global scale. The main benefactor behind this is that the coverage of the sport is much wider than it’s ever been. The likes of Sky Sports and other international sports broadcasts have all included healthy selections of games from the NFL.

In terms of other leagues, well they are few and far between. There are very few bookmakers that actually provide markets on them mainly because of the lack of professional leagues from outside the US. One thing that we have found as a result is that if you are looking to bet outside the NFL you will likely have to join bookmakers to whom those leagues reside in. The UK for example does not have a professional league, or at least one that gets any coverage, so the only viable options come from the NFL.

That being said, as with a lot of American sports the college level games are just as popular in the US as the professional leagues. College football is something that we look out for in terms of depth within American football but quite frankly, this addition would be a bonus.

To start with they cover the NFL, NCAAF and the CFL, but on differentiating levels. The NFL is their bread and butter league and its here where you are going to find the majority of markets and the majority of betting activity. We really liked their specials section that included a few markets that weren’t necessarily run of the mill betting opportunities such as teams to go 16-0 and MVP throughout the season.

In game betting markets were also on a really decent level. Games were having upwards of 15 pre-game markets to bet on that included points spread, money line, total points, half/quarter lines and game specials. Whilst in terms of quantity they don’t cover as much as a US bookie would, for the most part they will cover more than enough for the majority of bettors out there, especially those of us in the UK and EU.

One thing we do want to mention is that Ladbrokes turn all of their NFL games in-play, meaning you can bet live as the game takes place. You can keep up with a real time score but in terms of details about the match, we found this to vary depending on the game, with the higher profile games getting a little more information than most.

Bet Victor’s coverage is all to dissimilar to Ladbrokes in that they include a wide range of games from the NFL and the NCAAF. One area in which they don’t compare is the lack of coverage for the CFL. Whilst we know this isn’t going to be a huge deal for the majority of you, we do feel that it was quite a big omission giving that their two rivals above both offer up – varying – markets for this competition.

Their betting markets for each game were more than commendable with around 20 or so to bet on. Again, we found that the higher profile games or even the games that are going to be broadcasted around the world tended to get a little more coverage in terms of markets at least, but nonetheless, it was pretty solid all round.

We want to give an honourable mention to Coral before we finish and they ran Bet Victor very close for third spot. The reason why Bet Victor just piped them is because of their pricing. They are extremely good value on the whole and we will say that if value is your number one priority then they will probably be the best bookmaker long term. They aren’t that much better than the two bookies above and you will find times where they aren’t best priced, but on the whole we have found them very tough to beat.

How to Bet on American Football

If you are someone that is based outside the US then you may think that it would be quite tough to bet on American football. The sport is predominantly played over there – to any decent level at least – and you would think that Euro facing bookmakers would have a plethora of alternative sports to bet on.

Hopefully if you’ve read our three bookmaker picks you will see that this is no longer the case and it’s very easy to not only find a bookmaker that should suit your need, but also find a market in the industry that is extremely competitive, even outside the US. The increased exposure of the sport means that you get variety and choice as bettor so it’s important you work out what you want to bet and then base your decision around that.

The one thing that you will find from betting American football is that the betting markets can be quite different to those that are used to. There are three main options that you will be able to choose from. The first is called the spread. The spread is basically a handicapping market where you give one team an advantage over their rivals. An example may be that Team A is +6 on the spread whilst their opponents are -6. All that this means is that after full time the points are either deducted or added depending on which selection you made to give the result versus the spread.

The second one is the totals in which you simply choose the over or under for the total combined points for a game. This will often include a fraction to prevent any push results. It may look like over 46.5 or under 46.5. The final one is the to win (or money line) where you simply bet on which team you think will win the match overall. Remember, American football does not have draws, so a result will always occur, even if overtime is needed.

It’s worth pointing out that match bets will include overtime and in the event of a tie even after overtime, then the bet will be marked as push and all stakes will be returned. This also applies to all points and total points markets where overtime will be used. This will not apply to markets that are specific to certain quarters or half’s, where these will be completed upon the completion of each. Betting on overtime markets will only include the outcome of this section of the game and will not include the previous quarters.

Proposition bets will become void if the game is abandoned for whatever reason. If that market has already been settled prior to abandonment then these bets will stand. Player props will require that player to start for that bet to stand.

There's a New Crypto NFT Fantasy Football League, But Is It Gambling?

The Rise of Crypto Currency Sponsorship in Football

A Really Simple Guide to Formula One: How Do F1 Races Work?

Footballers in Prison: Which Players Have Spent Time Behind Bars

Lottery Taxes Around the World: Which Countries Take a Slice of the Jackpot?