Once described as ‘the most charismatic greyhound track in Britain’, Walthamstow Greyhound Stadium was as pleasant to look at from the outside as it was to watch racing from on in the inside. In fact, it was so iconic that the band, Blur, chose to use the site of two dogs running on the track as the cover of their third album, Parklife.

It opened its doors for the first time in 1933 and enjoyed a storied history in the years that followed. Despite protests to stop its closure, the inevitable happened when the decrease in popularity of greyhound racing caught up with Walthamstow Stadium and it closed its doors for the final time in 2008. Here’s a look at the complete history of the famous venue.

Before the Greyhound Stadium

Whilst the greyhound stadium at Walthamstow became a national institution, it was not built in an area that was particularly popular before the sport made it its home. During the early part of the twentieth century, the site was used as the home of the Myrtle Grove Sports Ground, being used by Walthamstow Grange Football Club as its home ground from 1908.

The first time that greyhound racing took place in the area was in 1929, when the Crooked Billet Greyhound and Whippet Track was built there. It was an independent track, meaning that the racing that took place on the grounds was unlicensed and not affiliated with the sport’s governing body. Even so, it was enough to catch the eye of William Chandler.

In 1931 William Chandler, who already had shares in the Hackney Wick Greyhound Stadium, decided to buy the site at Walthamstow. He also bought both the art deco parapet entrance that had been built in 1932, as well as the clock tower. Also included in the deal was the totalisator board that had been build by Thomas & Edge Ltd of Woolwich.

The development of the ground to make it into a greyhound stadium took around two years to complete. The grand opening of the new venue took place on the fifteenth of April in 1933, with Amy Johnson, the famous aviator, playing a part. Chandler installed Harry Briggs as the stadium’s Racing Manager and, despite the £24,000 he’d spent on buying it, it wasn’t perfect in his eyes.

When the stadium was opened by the first woman to fly across the Atlantic solo, it had little more in the way of spectator areas than two corrugated iron sheds. Not that that was bad for a venue that had been part rubbish tip before Chandler got involved. As someone who began life as an illegal bookmaker before moving on-course, he knew the value in making it more pleasant.

That’s why he spent the money he earned from the first few years of racing upgrading the venue wherever possible. In fact, Chandler decided to rebuild the stadium as many as three times between 1931 and 1943 to make it into what he considered to be the ‘perfect’ venue. Once it was done, though, it was a venue that he was proud of and one he believed would make good money.

How the Stadium Looked

Chandler set the Walthamstow Stadium up to be ideal for greyhound racing. He installed kennels and a paddock between the third and fourth bends in the track, whilst installing a room for the trainers and another for the veterinarians at either end of the track. The Senior Club sat between the first and second bends, with a stand either side.

The main grandstand boasted two tea rooms, as well as both a wet and a dry bar, to keep the customers happy. Being a bookmaker by trade, Chandler ensured that there were plenty of places to put a bet on, allowing sixteen different tote buildings. The track’s circumference was four hundred and forty yards, being one of the slowest and most difficult to race in London. 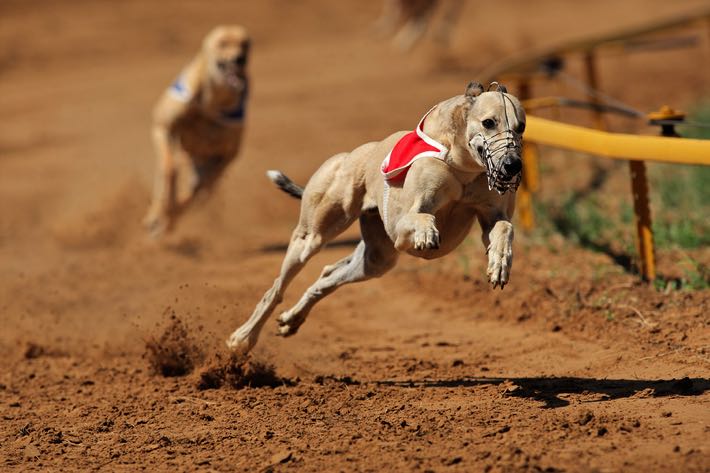 Alongside trying to make Walthamstow Greyhound Stadium the best in the business, Chandler also understood the importance of it becoming officially licensed. He worked hard to make that happen, seeing it host races under the rules of the National Greyhound Racing Club for the first time in 1938. It introduced its own competition, The Test, three years later.

Walthamstow was also unique in the world of racing because of the fact that several female trainers were hired. This was largely inspired by Frances Chandler, the daughter-in-law of William and a leading greyhound owner in her own right. That was headline grabbing, but it was the victory of Ballynennan Moon in the Stewards Cup in 1942 that really grabbed the attention.

Whilst greyhound racing was undoubtedly the main attraction at Walthamstow Stadium, there was a different type of racing that took place there from time to time. Speedway races happened for the first time in 1934, but it was in 1949 that it truly began to take over. The sport’s governing body revoked the licence of the Lea Bridge Speedway Club, closing the track.

As a result, the Lea Bridge speedway riders had nowhere to go, transferring to Walthamstow Stadium. When the club had its first ‘home’ fixture against Wimbledon eleven thousand people turned out to watch. There were problems with the lighting, causing trouble for the riders. Eventually the club was forced to move once more because of noise complaints.

Walthamstow Greyhound Stadium’s place in the pantheon of English sporting venues is deserved for numerous reasons, not the least of which is the fact that Winston Churchill addressed twenty thousand plus people on the site at the end of the Second World War. He was beginning his re-election campaign, using the famous venue to do so.

1945 was also the year that the Grand Prix was inaugurated, later going on to become one of the classic greyhound races. The year after saw everyone involved with Walthamstow Stadium in mourning when William Chandler passed away. His children were left equal shares of the business, meaning that the Chandler family continued to run the stadium.

Those that believe in the afterlife might well have imagined that Billy Chandler was looking down on the venue, given that 1946 saw a boom in the sport of greyhound racing that saw the stadium’s Tote take in over £7 million that year in turnover. Charles Chandler had been made Managing Director, Victor and Jack concentrated on bookmaking and Ronnie on training.

The track was proven to be a massive part of the British greyhound scene when it provided the English Greyhound Derby finalist for the first time in 1948. The stadium also provided another piece of bookmaking history when Joe Coral, the founder of Coral bookmakers, had a pitch there before opening betting offices of his own in the 1960s.

Speedway and greyhound racing weren’t the only form of racing to take place at Walthamstow Stadium. From 1962 until 1968, the venue was also used for stock car racing. It wasn’t uncommon for the sport to take place at greyhound and speedway tracks, so Walthamstow having been home to both sports certainly helped.

The venue was home to BriSCA “Senior” F1 and “Junior” F2 stock cars, whilst in March of 1968 the Spedeworth promotion took over the running of Walthamstow. They put on Superstox, Hot Rod, Stock Car, Midget and Banger racing. The racing continued at Walthamstow Stadium until the end of the racing season in 1974.

The Track Is Modernised

There were some minor changes to Walthamstow Greyhound Stadium over the years, including the introduction of closed circuit television in 1963. In 1965, a chromotography test for drugs was carried out for the first time at a purpose-built lab. Perhaps the biggest change in terms of the actual track came in 1968 when the bends were banked to produce faster speeds.

Even so, time was catching up with the venue and, so in 1971, an escalator was added to a new stand, which also featured a restaurant. The 1970s also saw some uncertainty creep in, with the deaths of both Charles and Victor Chandler. Percy Chandler became the new Managing Director and Charles Chandler Jr. the Chairman.

In 1984, an attempt to offer another string to the stadium’s bow resulted in the building of Charley Chan’s nightclub, which was located underneath the totalisator board. There were also moves to modernise the training side of life at Walthamstow, with the likes of Kenny Linzell, Dick Hawkes and Jim Sherry joining the venue.

The Stadium Heads into the 1990s

In 1987, the Arc was added to the list of Walthamstow Stadium’s major races, becoming the fourth to be run there. Greyhound racing’s popularity showed no signs of declining and, despite trainers chopping and changing, Walthamstow was seen as the centre of that. By 1988, the venue’s Tote turnover was in excess of sixteen million pounds.

When the 1980s turned into the 1990s more changes were afoot, chiefly seeing Chris Page takeover as the Racing Manager. There was also more success for women thanks to Linda Mullins winning the Trainer of the Year award five times in a row. 1990 also saw Walthamstow’s second Derby win with Slippy Blue finishing first in the event.

The track was awarded its first Bookmakers Afternoon Greyhound Service, meaning that races would be televised into bookmaker’s shops up and down the country and the track would receive some money accordingly. 1998 saw the Racing Post host a Festival at Walthamstow, whilst Linda Jones was appointed as a trainer in 1999, winning two Greyhound Trainer of the Year Awards.

As the 1990s began to turn into the 2000s, greyhound racing’s popularity declined dramatically. At one point, there were as many as thirty-three greyhound tracks in London, but that soon dropped to just a couple. Charlie Chan’s nightclub under the totalisator board was closed in November of 2007, whilst the directors of the venue began to consider their options.

That more than fifty million people had attended dog tracks every year after the war made no difference to Walthamstow in the 2000s, which found itself staring down the barrel of extinction. The fact that it boasted the biggest attendances of any greyhound stadium in the UK couldn’t stop it from losing £500,000 per year, meaning closure seemed inevitable.

The End of Walthamstow Greyhound Stadium

Understanding its responsibility towards the dogs, Walthamstow Stadium worked hard to give support to Johanna Beumer, who finds homes for former racing dogs. Yet the venue’s legacy was all but run roughshod over by the decision of the owners to close the place down in 2008. It soon fell into disrepair and was eventually sold to property developers.

In 2016, the famous art deco neon lights that adorned the entranced to Walthamstow Stadium were switched on once again. The lights, which earned the stadium the nickname of ‘Las Vegas at the end of the Victoria Line, were painstakingly restored by Andy Cook at a cost of around £100,000 and with the backing of the housing association building three hundred homes there.

Around four hundred and fifty people lost their jobs when the track eventually closed in the summer of 2008. Memories were lost along with the dog racing track, even though countless people tried to capture them. It was one of the view visitor attractions that Walthamstow as an area had to offer, which is why Katherine Green photographed as much as she could whilst she could.