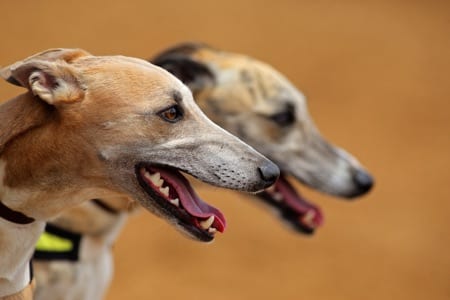 Every sport has its standout domestic moment. In horse racing, for example, there’s the Gold Cup and the Grand National. In football, there’s the FA Cup final. In the world of dog racing, it’s the Greyhound Derby, which was first run in 1927 and can be used as something of an allegory for the decline of greyhound racing over the years.

It is unquestionably the most prestigious event in British greyhound racing, seeing the great and the good of the sport come together to win the race and etch their names into the record books. They’ll have to go some way to come close to Mick the Miller, Patricias Hope, Rapid Ranger and Westmead Hawk, though. Here’s a look at greyhound racing’s top event.

The History of the Race

White City Stadium was built for the 1908 London Olympics, but when the ‘Greatest Show on Earth’ ended there was a desire to find another purpose for the venue. In 1926, the Greyhound Racing Association took over the running of it, grassing over the track in 1927 in order to allow greyhound racing and speedway to take place on it.

It was soon considered to be the greatest greyhound stadium in the country, which is why it was chosen as the venue that would host the English Greyhound Derby. The prize for the new event was £1,000 and a gold cup, resulting in trainers and owners taking it seriously. The first recipient of the prize was Joe Harmon, the trainer of the winning dog Entry Badge.

For the inaugural outing of the Greyhound Derby, the participants were decided according to regional heats. A Northern Final and a Southern Final took place, with the dogs that finishes in the first three places in each being invited to take part in the main event. It was run over five hundred yards and Entry Badge was made the favourite on account of his strong win in the Southern Final.

The brindled dog, who was owned by a butcher, took the lead early and then held onto it, in spite of a strong test coming from Ever Bright. Eventually he won by six lengths, finishing the race in just shy of thirty seconds. Edwin Baxter, the owner, actually owned the three dogs that finished in the first three positions of the final.

When the Greyhound Derby returned to White City in 1928, it was run over a distance of five hundred and twenty-five yards for the first time and all qualifying rounds took place there. Joe Harmon was hoping for a second consecutive win with Fabulous Figure, but in the end, had to settle for second place as the Tommy Johnston Senior trained Boher Ash won it by half a length.

The race in 1929 was notable for a number of reasons. Firstly, the event organisers wanted it to be a ‘clean’ race, so they restricted it to just four runners in the hope that that would then be the case. It is the only time in race history that this has happened. It was also the first win of Mick The Miller, who would make history the following year by being the first dog to win the race twice.

Not many things can interfere with the world of greyhound racing, but it turns out that war is one of them. The outbreak of the Second World War didn’t initially stop racing from taking place, with Long Keel winning in 1938 and Highland Rum doing so in 1939. G.R.Archduke was the winner in the final race before it was suspended, winning by a neck in 1940.

Whilst the threat of war might have been ever-present in 1939, it didn’t stop the crowds turning up to watch the racing. A record ninety-two thousand people attended the Greyhound Derby that year, with a similar number of people arriving at White City to watch the first race that was run after the Second World War’s conclusion.

Much Remains the Same

Despite the fact that there was a fair amount of turmoil going on at White City Stadium itself in the years that followed the Second World War, with new General Managers and trainers being brought in on a regular basis, much remained the same as far as the Greyhound Derby was concerned. In fact, there wasn’t much to mention until the 1970s came about.

An End to White City

In 1969 it emerged that the Greyhound Racing Association had granted an option to Stock Conversion and Investment Ltd, allowing them to purchase White City for the purposes of redevelopment. The idea was that a new White City Stadium would be created, with GRA announcing that architects plans had already been drawn up.

In the years that followed, nothing happened to the stadium and many people simply forgot about the sale of options to Stock Conversion and Investment Ltd. This all came to a head in 1984, however, when the redevelopment plans went ahead but without any plans for a new stadium to be built. The final Greyhound Derby took place there in June.

Whisper Wishes won the last Greyhound Derby at White City Stadium, defeating Moran’s Beef by three-quarters of a length. Racing generally hadn’t changed much at the stadium since that first Derby in 1927, though it’s fair to say that the prize money had. Whisper Wishes won a prize of £25,000 for his win.

A New Life at Wimbledon Stadium

The race was moved to Wimbledon Stadium from 1985 onwards. It offered a sand surface rather than the grass of White City and had been hosting greyhound racing since 1928. Mick The Miller had been bought by Arundel Kempton in 1929 and was therefore from Wimbledon when he won his second Derby in 1930. It helped to propel the sport and the track into the limelight.

Whilst the GRA had already made clear that it wouldn’t allow a track not owned by the organisation to host the premier race in greyhound, there was nevertheless a groundswell of support for Wimbledon to get the honour. It certainly helped that Bob Rowe, the Chief Racing Manager for the GRA, also happened to be Wimbledon’s Racing Manager.

The new track also required a new distance for the race. The inaugural Greyhound Derby at Wimbledon Stadium was run over five hundred and twenty yards and was notable for two reasons: firstly, it saw the track have its seventh winner of the Derby, whilst, secondly, the win for Pagan Swallow meant that both Phillip Rees Junior and his father had won the race.

The greyhound racing industry had been undergoing a steady decline since the 1960s, despite efforts of the sport to revitalise itself. This continued into the 1980s, with both Slough Stadium and Harringay Stadium closing. This resulted in the Oaks for bitches being moved to Wimbledon Stadium, which was still seen as prestigious and important.

The decline of the sport can be linked to the Derby in some ways and to the state of Wimbledon Stadium in particular. In 1992, for example, the Greyhound Racing Authority’s parent company, Wembley plc, announced an overall loss of £8 million, in spite of the fact that its UK operation had boasted a net win of £13 million. Simon Harris took over from Bob Rowe as Racing Manager of the track.

The 2000s are Important Years

The turn of the millennium brought about a chance for greyhound racing to once again force itself into the public’s consciousness. The opportunity came about courtesy of Rapid Ranger winning the Derby for the first time in 2000 and then becoming only the third dog to win the event twice when he won it again in 2001.

The 2000s also saw Catford Stadium close its doors for the final time, whilst Wimbledon attempted to change things on the track. The 2002 Derby resulted in criticism being levelled at the Stadium on account of the track, resulting in £70,000 worth of improvements being carried out. That was less than the £75,000 that was awarded to the 2002 Derby winner, Allen Gift.

In 2005 and 2006, Westmead Hawk became the fourth and final dog to date to win the race twice. He picked up £100,000 for each victory. Perhaps the biggest year, though, was 2010 when the stadium underwent major changes ahead of the Derby. The Grandstand shifted location and that meant that the track’s layout had to be changed, ultimately leading to new records.

The decline of greyhound racing continued year-on-year and, ultimately, it had a disastrous effect on Wimbledon Stadium. A decision was taken to close it in 2017, with falling attendances the chief reason. Even when people did turn up for the final meeting in March, many of them had to be turned away on account of the fact that parts of the stadium were closed for maintenance.

That meant that the final Greyhound Derby was actually hosted by Wimbledon Stadium 2016, with the event moving to Towcester Racecourse in 2017. Despite the overall lack of interest in greyhound racing, the stadium in Towcester had only been opened in 2014 and was therefore one of the most modern in the country. In fact, it was the first greyhound stadium to open since 1995.

It hosted the Greyhound Derby in 2017 and 2018, but in August of 2018, the racecourse’s future was put in doubt when it went into administration. Eventually the promoter of Henlow Stadium, Kevin Boothby, signed a 10-year lease for the stadium but by that point it was too late for the Greyhound Derby to be kept. Even its re-opening in March of 2020 had to be delayed because of the Coronavirus outbreak.

The Future of the Race

The Greyhound Derby was run at Nottingham Greyhound Stadium for the first time in 2019. The venue opened in 1980 but underwent renovation and expansion in 2008, being the exception that proved the rule in terms of greyhound stadiums having to shut their doors due to a lack of interest in the sport. Offering a sand surface over four hundred and thirty-seven metres, the first Derby here was won by Priceless Blake.

Quite what will happen to the race next remains to be seen. It was originally supposed to be run at Towcester for five years, so it’s possible that it might return there at some point in the future. Equally the success of the race during its brief stint at Nottingham Racecourse might see it remain in the East Midlands. Regardless of where the race is run, it will still be seen as the most prestigious race on the greyhound calendar.