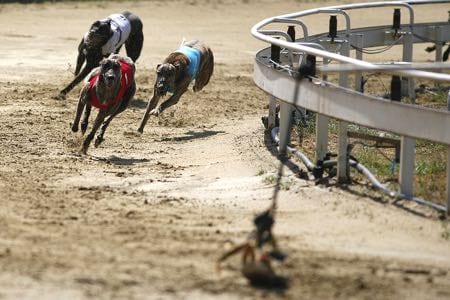 Greyhound racing was one of the most popular sports in the United Kingdom at its height, with more about 70 million people a year attending tracks at the sport’s peak. Even in the modern era, roughly two million lovers of the sport still turn out to watch races on a yearly basis. Part of the appeal of the sport is the fact that it’s easy to understand, with the fastest dog being declared the winner.

Another part of the reason it’s so beloved of so many is that dogs are one of the most popular breeds of animal in the world. There’s roughly eight and a half million dogs in the United Kingdom, with just shy of a quarter of all households owning at least one. Given the popularity of the animal, why isn’t it dogs other than just greyhounds that are used in dog racing up and down the country?

Greyhounds Are Uniquely Talented for Racing

The history of greyhounds isn’t completely clear, with Romans believing that the Celts introduced the dogs and Celts being under the impression that they came from Greece. It’s entirely possible that even the name, ‘greyhound’, comes from the fact that the Celts called them ‘Greek hounds’. It’s likely that greyhound as we know it actually came from the Middle East, bred by nomadic people there

The Earl of Orford was the first to open a coursing club, doing so in 1776. The Swaffham course was open to the public and it opened at the same time that horse racing also opened to everyone, with both sports coming popular almost immediately. The Earl actually cross-bred greyhounds with other dogs in order to try to breed the perfect racing dog, ultimately discovering that it’s difficult to improve upon the greyhound.

As the 17th century progressed, it became apparent that keeping a note of your greyhound’s pedigree was a useful way of proving its purity. As the 17th century turned into the 18th, adverts for dogs available to stud in exchange for a fee began to appear. This was doubtless because of the fact that people realised the unique nature of greyhounds for the purposes of racing, desiring successful ones as studs.

It was under these conditions that greyhound racing increased in popularity in the 19th century. The sport was essentially split into two, with one part being greyhound racing that took place on tracks and the other being live hare coursing. The latter was scored on more than just speed, with the likes of the ability to turn and kill the hare also earning points. This is partially why it was that greyhounds were made the dog of choice.

During the 19th century, greyhounds were typically raised in remote locations, allowing them to roam freely and chase whatever it was that happened to catch their eye. The combination of constant exercise and a tough climate built incredible endurance into the dogs, which then helped them when they were racing or coursing. The first enclosed track was opened in 1876, which is when such racing became the foremost version.

Ultimately, greyhounds are sleek, slender and quick of foot. That means that they’re the ideal dog to be used in racing, with few other breeds having this combination as well as the focus in purpose that you get from a greyhound. The move to enclosed courses, which saw a race’s length reduced to around 800 yards rather than three miles or so, put the premium firmly on speed for racing dogs, hence the greyhound’s success.

They Have a Prey Drive 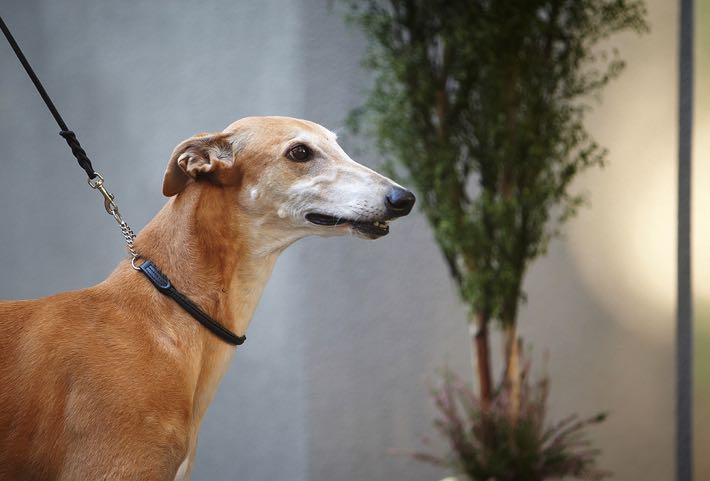 Greyhounds come from the sighthound group, meaning that they have a well-developed prey drive. Even the vision of a greyhound is different to that of many other breeds, with brachycephalic breeds lacking the same sense of peripheral vision. They also have an in-built ability to chase objects that are moving quickly, which means that they can be ‘tricked’ into racing around a track better than other breeds.

Whilst some dogs might be as quick as greyhounds, they will show little to no interest in chasing a lure around a track. Prey drive is used to determine whether dogs will be good at a host of events, such as Frisbee, fly-ball or herding. Some will be better at certain events than others, as anyone that has ever watched the fly-ball event during Crufts will be able to attest to, such is the thrill of watching a dog that is good at it.

The majority of dogs have a prey drive, but whilst some are interesting in chasing squirrels, birds or even cats, not all of them will have the innate drive to get the hare that acts as a lure in greyhound racing. Predatory aggression is adrenaline fuelled, as opposed to inter dog aggression. A well-balanced greyhound will be desperate to catch and kill a lure, but show no aggression to its fellow dogs.

Ultimately, it all comes down to speed. Whilst some dogs are quick when they’re running, none are as fast as greyhounds. Indeed, it’s widely believed that greyhounds are the second-fasted land animal on the planet, with sleek and streamlined bodies that allow them to maintain solid aerodynamics. Whilst they’re fed well by owners who have them for racing, they are similar to athletes in the sense that they burn off the food they eat.

After thousands of years of breeding with the specific aim of getting a greyhound to chase down its prey, it’s hardly a surprise that they’re so quick off the mark. It’s not just that they’re quick, but also that they can hit high speeds in just a few strides; it’s not unheard of for greyhounds to be running at 40 miles per hour after taking just a couple of strides, running with only the objective of reaching their target in mind.

They Have Big Hearts 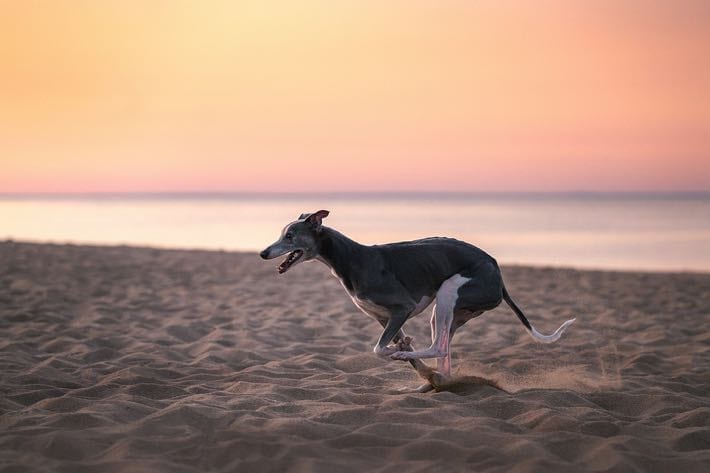 We’re not just talking about a greyhound’s ability to offer their owners love and affection, though most of them are able to do so. Instead we’re literally referring to the size of their hearts, which are typically much bigger than the hearts of other dog breeds. In fact, a greyhound’s heart is closer in size to a human’s than those of certain other dog breeds, such is the extent that they’re build for athletic reasons.

The breeding of greyhounds over the years has concentrated on the animal’s ability to run at high speeds. As a result, their hearts have grown in order to power them through the racing that they are involved in. Every beat of the heart sees a massive amount of blood pushed through, occasionally leading inexperienced veterinarians to believe that there’s a problem with the dog when they listen to its heart beating.

Other Breeds Are Raced

Whilst greyhound racing is the most popular form of dog racing around the world and will forever remains so, other dog breeds have been raced at one point or another. The most obvious example of this is the whippet, which is a medium size dog. The problem as far as the purpose of this piece is concerned, however, is that whippets are actually descended from greyhounds and are part of the sighthound group.

The name of the whippet is believed to have derived from a now obsolete 17th century word meaning ‘to move briskly’, which tells you plenty about the breed itself. Also known as ‘snap-dogs’, whippets are essentially slightly smaller versions of the greyhound and were once described as ‘the poor man’s racehorse’. Whether the should be thought of as completely separate and different from a greyhound is a personal choice.

The Saluki is another breed that has often been raced, but the fact that they’re known as the ‘Arabian Greyhound’ makes it clear that they’re not all that different to the breed that we’re talking about. Considered to be the royal dog of Ancient Egypt, numerous Salukis have been found mummified alongside the Pharaohs that they will likely have served. They were used for hunting the likes of gazelles and foxes.

In the United Arab Emirates, few dogs are kept as pets on account of the fact that they are seen as unclean. The exception to that rule comes in the form of the Saluki, which are, perhaps unsurprisingly, part of the sighthound family. Their link to greyhounds means that Salukis might also be exempt from the list of ‘other’ dogs that take part in races, given that they’re essentially just greyhounds from a foreign climate.

One dog breed that might not immediately be thought of as one that would be raced is the Vizsla. The Hungarian breed is a sporting dog that can be used for racing, with the name of the breed meaning ‘tracker’ or ‘searcher’. A natural hunter that is endowed with both a strong nose and the ability to be trained, the fasted have been known to hit speeds as high as 40 miles per hour, similar to the greyhound.

The final breed worth mentioning is another one from the hound family, this time in the form of the Afghan Hound. They couldn’t look less like their greyhound cousins, given the long flowing locks that adorn their bodies. Yet even in spite of this, they can reach speeds of up to 30 miles per hour. Proving the point regarding the lack of reliability of certain dogs when it comes to racing, however, whether they run or not often depends on their mood. 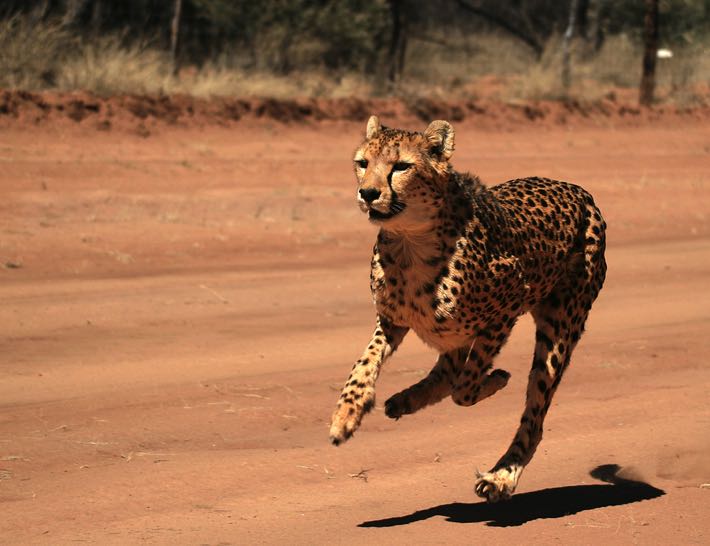 Given that greyhounds are often described the second-fastest land mammal, it seemed inevitable that at some point someone would attempt to find out how much fun racing the fastest such animal would be. This is widely agreed to be the cheetah, which has notched up recorded speeds as high as 75 miles per hour. So it was that an experiment around their ability to race was carried out in the 1930s.

Harringay Stadium was opened in 1927, the same year that White City Stadium was opened and following in the footsteps of Belle Vue, the Manchester course that proved greyhound racing could be successful in the United Kingdom. Known as a hive of activity and quirkiness, the locals often needed to be offered something a little off the beaten track in order to keep them entertained, which is where cheetah racing came in.

Explorer Arthur Leggett imported 12 cheetahs from Kenya, working with game-hunter and sportsman, Kenneth Gandar-Dower, to bring them to the UK. After six months spent in quarantine and a year acclimatising to British life, they were put onto the track to see how they’d get on. It took them a while to get to grips with chasing a mechanical hare, with organisers eventually resorting to tying meat to the lure.

The problem was that the cheetahs were  fast, regularly catching up with the mechanical lure used on the track. Once the leading cheetah had managed to catch it, the rest of the field stopped running. Soon the novelty of watching the African cats race around the track wore off, with greyhounds proving once and for all why it is that they’re the best animal to use when organising races.

Previous Post: « Ladbrokes: The Bookie that Once Owned the Hilton Hotel Chain
Next Post: Home Nations Performance at the Euros »