Blackjack is a game that requires you to get as close to 21 as possible, without going over that figure. As long as you don’t go over 21 and you have a higher score than the dealer, you’ll win. In that sense, it is a relatively simple game, which probably helps to explain its enduring popularity. In reality, though, there are numerous different complexities that make it far more tricky to master than might at first appear to be the case. Whilst an obvious complexity is the manner in which an Ace can be either a one or an 11, depending on how it works for you, there are more subtle distinctions that we’re referring to.

Elsewhere on this site you can read about when it is right to either Double or Split when playing blackjack. That can be an art in itself, presenting you with a chance to take on the dealer as you play. Another option open to punters is that of surrendering, but it is only open when you play certain versions of the game. That is an important thing to remember, given that you don’t want to be in a position where you tell the dealer that you want to surrender during a game where that is not an option that is open to you.

What Does It Mean to Surrender? 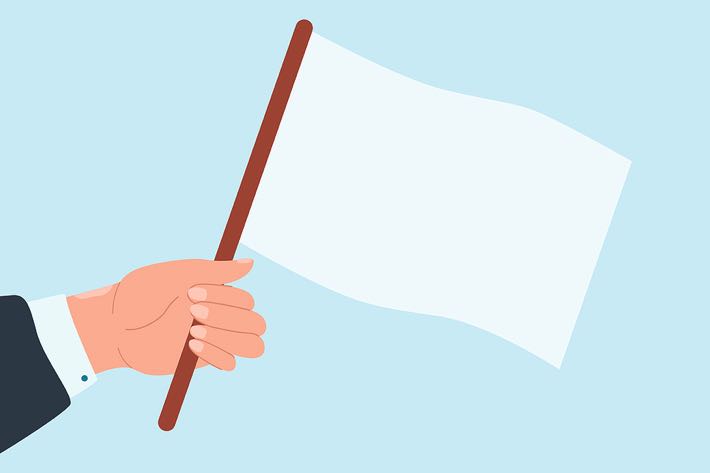 Mention the word ‘surrender’ and most people will have a mental image of someone in a war waving a white flag in order to let the opposition know that they’re laying down their weapons. In the world of blackjack, things aren’t quite as black and white in terms of surrendering. You’re not announcing to the dealer and other players that you’re walking away from the table altogether, but are instead indicating that you’re willing to sacrifice half of your stake as you’re reasonably convinced that you’re involved in a hand that you’re going to lose.

Typically, surrendering takes place after you’ve seen your first two cards and the dealer’s up card. This is the point at which you’ll be able to do the sums and decide whether or not you have a better than 50% chance of winning the hand. If you have less then a 50% chance of victory then it is probably worth considering taking up the surrender option. Generally, casinos, both online and land-based, offer both the early surrender and the late surrender, which work in slightly different ways from each other depending on when you do it.

Let us start by taking a look at the early surrender option. This is when you can surrender half of your stake before the dealer has checked their hold card to see whether or not they have blackjack. As you might imagine, being able to do this puts a dense in the House Edge, given that players can walk away from a bad hand when seeing that a dealer has either an Ace or a card worth ten. It takes away about 0.6% of the House Edge, which isn’t massive, but can be a difference maker if you’re playing blackjack for a long time.

The idea of an early surrender was brought in by the Casino Control Commission in America during the 1970s. It was at a time when they were setting up legal casinos in New Jersey’s Atlantic City, believing that more liberal rules might encourage players to turn up. They were also hoping to stop dealers from colluding, which would have been possible if they knew that they had a blackjack after looking at their hole card. It was not a particularly successful rule for the casinos, so it is rarely seen today. Even if it is seen, there are likely to be tweaks to it.

The fact that early surrender was such bad news for casinos meant that it soon disappeared from them up and down the land. The surrender that is available most commonly nowadays is late surrender. As the name implies, you need to wait until after the dealer has checked their hole card to see if they’ve got blackjack before surrendering. The difference in the impact it has on the House Edge is pretty dramatic, but that doesn’t mean that you shouldn’t at least consider taking the option up in certain circumstances.

Unsurprisingly, casinos tend not to make a song and dance about the fact that they offer punters the late surrender. It doesn’t tend to be announced on signage, for example, with the best bet in most instances being asking the dealer whether or not the surrender option is available. You might also want to ask them what the sign is that you need to do to inform them that you’re surrendering, given that they differ from place to place. It is much easier to do in online casinos where the ability to surrender is an option open to you.

There are no hard and fast rules when it comes to surrendering. That is to say, House Rules will influence whether you need to surrender or not depending on your hand. Blackjack is, ultimately, a game of statistics. Yet there are any number of things that can influence the statistics that are in play for you.

A rule of thumb is to surrender any hand that offers you a less than 50% chance of success, but this itself can be influenced by the likes of the number of decks of cards being used or whether to hit or stand on a soft 17. If you manage to find a casino that offers early surrender, you’ll want to surrender in the following instances:

Things are different with late surrender, not to mention the added complication of how many decks are being used. Here are some rules of thumb for when you’re playing and late surrender is an option:

As we’ve already suggested, the rules around when to surrender differ depending on a number of circumstances. One of them is the fact that the surrenders outlined above are what you should do when you’re playing total dependent. That is to say, it doesn’t matter whether your 16 is comprised of a 7 and 9 or a 10 and a 6, the total adds up to 16 and that is all that matters when you’re making your decision. There are some people that believe that the composition of your hand should also be taken into account when considering a surrender, however.

Someone that is using composition dependent rules would, for example, choose to play a 15 made up of 8 and 7 but surrender the same total made up of 9 and 6, presuming that they were playing single deck blackjack. Given that there are in excess of 12 different such variations depending on the composition of your hand, it is not a surprise that those just learning about the rules of surrender might well find it overwhelming. In short, if you’re not too sure what you’re doing then you’ll want to avoid over-complicating things.

If there is one thing that you take away from reading this piece, it is the idea that surrendering isn’t always an option. Often, you will not be able to use surrender as a move to reduce the House Edge on specialist games of blackjack, such as Blackjack Switch. On the other hand, some casinos will literally have tables called Surrender Blackjack, making it perfectly clear what you will and won’t be allowed to do on that front. Spanish 21 is a variation on blackjack that is much more liberal with its rules, including the ability to surrender.

As a rule, if you’re not sure whether or not you’re allowed to surrender then you probably won’t be. Even so, it is always worth asking the dealer what the House Rules are on that front. They will always know what you can do with your cards and they will be clued in on getting things right; it’s literally their job to do so. If in doubt, therefore, ask the dealer and get them to talk you through what you need to do to indicate to them that you wish to surrender half of your stake in return for walking away from a bad hand whilst you can.

Previous Post: « What are the En Prison & La Partage Rules in Roulette?
Next Post: How Are the Hosts Chosen for the Olympics? »