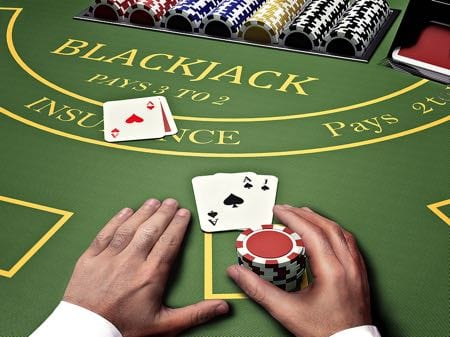 On the face of it, blackjack is a simple enough game. You go up against a dealer, with the aim being to get a higher score than them whilst remaining below the score of twenty-two. If you succeed then you win, whilst if you fail you lose. That’s it. Yet once you start to delve deeper into the game you find that there are all sorts of rules and eccentricities that add a degree of complication to proceedings.

For starters, an Ace can class as either one or eleven. Depending on what it is you’re dealt, you can choose which you’d like it to be. There are also rules that certain casinos put in place, such as the dealer has to stick if they hit seventeen. There is a thing called ‘Basic Strategy’, which is designed to swing the odds in your favour if you follow it. Then there’s the matter of being able to Double & Split, which we’ll look at here.

The rules of blackjack are that you are dealt two cards, whilst the dealer is dealt the same number. The dealer will put their first card face up, giving you a little bit of insight into what hand they might end up with. If they have an Ace, for example, it’s reason to worry that they might hit a natural blackjack, which is an ace and a ten or a face card. Both of the players’ cards are dealt face up.

A natural blackjack means that you win automatically, with casinos usually paying out at odds of 1.5/1. If you don’t have a natural blackjack then you must decide what to do with your hand, bearing in mind that you’re trying to get close to twenty-one without exceeding it. You can choose to take a Hit, which means you’ll be dealt another card, to Stand, which means no more cards, or to take one of the other choices we’re talking about here.

There are other options available to you at most casinos, too. The first is that you might be able to ‘surrender’ half of your stake if you’re relatively convinced that you’re going to lose the hand. This means you’ll only lose half of the amount you’ve bet if you’re correct, though it obviously also means that you’ll only win half if you’re wrong. Sometimes you can take insurance out against the dealer getting blackjack if their first card is an Ace.

If you surrender or take so many cards that you go bust and exceed twenty-one then the dealer automatically wins. If they get closer to twenty-one than you do then they also win. There are numerous rules for dealers that differ from casino to casino, but normally they have to hit if they have less than seventeen, stand if they have eighteen or more and do one or the other depending on whether they have a soft or a hard seventeen.

If you remove all standard variations in blackjack then the House Edge stands at a couple of percent. Whilst that’s not outrageous compared to some casino games, it does mean that players will inevitably try to find ways of reducing it where possible. One such way of reducing the Edge is by card counting, but that is extremely difficult to do, virtually impossible to do online and will get you kicked out of physical casinos.

One thing that casinos have no problem with you doing is employing a method known as Basic Strategy. Indeed, in some casinos in Las Vegas you can even buy cards that have the notions of Basic Strategy printed on them. It’s far too complicated to go into the nuts and bolts of Basic Strategy here, but the important thing to remember is that if you follow it then you’ll reduce the House Edge to about 0.2–0.5%. 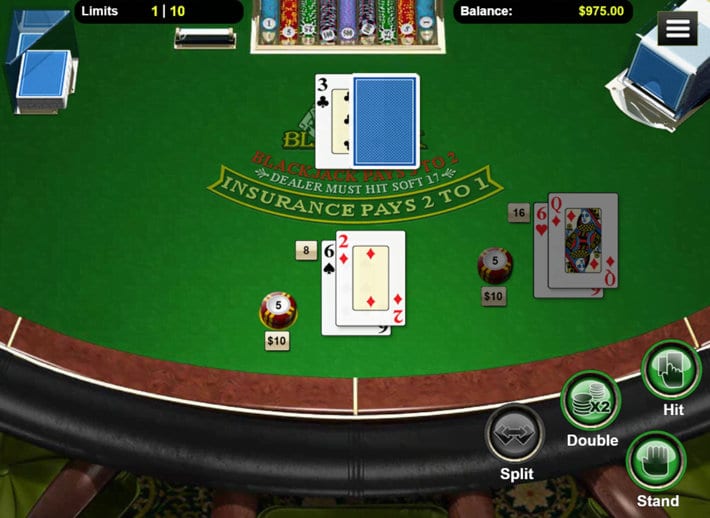 Another thing that can help you is Splitting. This is an option given to you if you’ve been dealt two hole cards that are the same, like two Eights, for example. You can only Split your cards when you’re first dealt then and can’t do it later on in the game. In order to Split, you’ll need to match your original stake as it is the equivalent of playing on with two hands instead of one.

When you Split, you’ll then be dealt a second card for each hand and can continue to play them out as if they were the hand that you were dealt. This means that you’ve got twice as much chance of winning, though it also means that you stand to lose twice as much in the way of your stake if things don’t go to plan. There are also a myriad of circumstances that should influence your decision.

It is, of course, entirely up to you when you choose to Split the cards that you’ve been dealt and when not to. That being said, it is generally accepted that there are two main hands you can be dealt where you should always Split:

A Pair of Aces

If you’ve been dealt a pair of Aces then you’ve either got two or twelve. Neither of those are particularly attractive hands to have to, but if you Split your Aces then you’ve put yourself into a position where your chance of getting blackjack with at least one hand stands at about 52%. This is because there are sixteen cards in the deck with a value of ten, which is more than any other card.

A Pair of Eights

A hand of sixteen, meanwhile, is another one that isn’t much fun to play. You’re essentially depending on the dealer going bust in order to win, which isn’t massively likely. If you Split the two Eights, on the other hand, you could get a Ten or an Ace and end up with a hand of eighteen or a soft nineteen, which are both much nice hands with which to take on the dealer.

A Pair of Tens

A pair of Tens will always be best off Standing, for the simple reason that you’re unlikely to improve upon the hand you’ve been dealt. With the rest of the pairs that you could be dealt, there are statistically ‘right’ or ‘wrong’ answers depending on what the dealer’s upwards facing card is. This is when it’s handy to have a good sense of what Basic Strategy would tell you to do.

What to Do When Dealt a Pair

Here’s what you should do in various circumstances, according to the statisticians:

If the dealer has a card face-up other than the ones listed above, you should not Split. One thing to bear in mind, though, is that you’re technically allowed to keep on Splitting for as long as you get dealt two matching cards. Different casinos will have different rules on this, but that’s a solid rule of thumb in most places, whether it’s a land-based casino or an online alternative.

Doubling Down in Blackjack 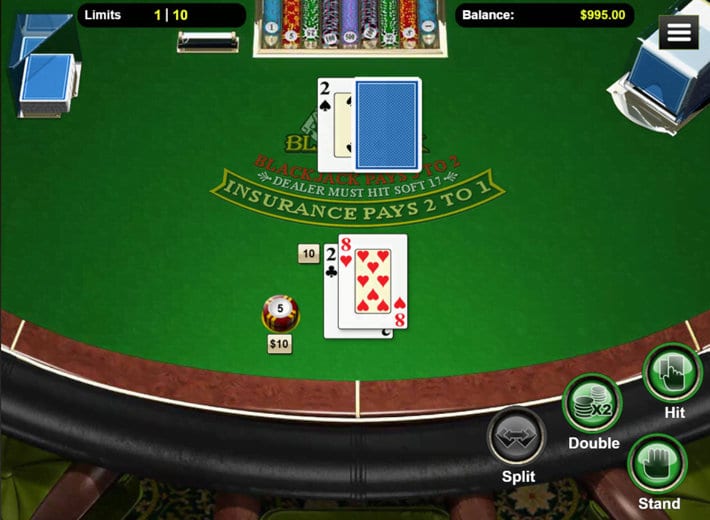 The other option that is worth consideration for a blackjack player is the ability to Double. This is essentially when you’re so confident that your hand will be a winner that you choose to Double your original stake. You can only do it after being dealt your original hole cards and if you choose to Double then you’ll only be able to receive one additional card from the dealer.

The key thing you need to think about when deciding whether or not to Double is if you can afford to lose twice the amount of your stake. If you’re playing the minimum stake amount allowed in a land-based or online casino then the chances are that you’ll be alright losing it. If you’re playing on a High Roller table, however, you might have to give some serious thought to what losing twice your stake would mean.

In simplistic terms, it really only makes sense to Double when you have a hand that adds up to either ten or eleven from your two hole cards. This is because there is just below a one-in-three chance (30.7% to be exact) that you’ll hit a card with a value of ten and you’ll end up with either twenty or twenty-one. Given you’re taking on double the risk, you really want to stand the best chance of winning your hand.

Obviously the suggestion is that any hand other than ten or eleven should not be Doubled down on, but that’s not quite true. Realistically speaking, a hand of twelve or more faces an increased chance of going bust, so it would be folly to Double on that and put yourself in a situation where you are more likely to lose twice your stake. If you have eleven or lower, however, you simply can’t go bust.

The above table refers to hard hands and the rules are slightly different when an ace is involved. So if you’re dealt a soft hard (and ace with another card) then use the table below:

If you have something like four, five or six from your hole cards, it would be a big risk to Double your wager. You’ll simply need too many things to go your way to make it worth while. If, on the other hand, you have been dealt a hard eight or a hard nine then you’ll want to take a second or two to at least consider your options. The decision that you make will depend entirely on what the dealer’s face-up card is.

(Almost) Never Double It If the Dealer Has an Ace

If the dealer has an Ace showing then you should almost never Double, regardless of what cards you’ve got. The exception to this rule is when you have a 11 but only when playing certain forms of blackjack. For optimum strategy this one is right on the edge and can be affected by the number of decks and whether or not the dealer hits or stands on a soft 17.

What If the Dealer Shows Low Cards?

If, though, the dealer is showing a low card, then you can Double down if you’ve got a hard eight or a hard nine, in addition to a hard ten. The same is also true of if you have a soft sixteen, seventeen or eighteen. The temptation might be to stick, but you’ve actually got more chance of improving your hand than not.

When it comes to opting for a Double, the most important thing to look out for is the rules in place at the casino that you’re betting in. Doubling down isn’t always allowed, for example, so knowing whether you can do it or not is a great place to start. On top of that, some casinos will only allow you to Double if you’re on a ten or eleven with your hole cards, which certainly makes it easier to decide what to do.

The other key factor that will differ from casino to casino but will influence your chance of winning is what hand the dealer must hit up to. Seventeen is the standard, but some casinos will have a dealer having to hit up to sixteen. This makes it less likely that their hand will exceed twenty-one, thereby reducing the odds of your hand becoming a winning one. Finally, if the dealer checks for blackjack when dealt an Ace or Ten then the game will stop there if they have it or won’t if they don’t.

Previous Post: « Donkey Racing & Other Weird Things People Bet On
Next Post: Could We See the End of White Label Casinos? »