There are multiple different variations of Stud Poker, but the most popular are five card and seven-card stud.

Seven card stud was originally the most popular type of poker, but was replaced by Texas hold’em in the early 70’s.  Even though Stud Poker has fallen down the ranks of popularity a little, it still often played in both live poker rooms and at online poker sites.

Seven-card stud can be played as high, or hi/lo (which means that the high hand winner splits the pot with the low hand winner); and can also be played with limit betting or pot limit betting.  Each table may have up to 8 players taking part in 7-card stud, and as few as 2 players to play heads up.

It is played very similarly to Razz Poker as far as the betting and dealing of cards go.

How To Play Stud Poker 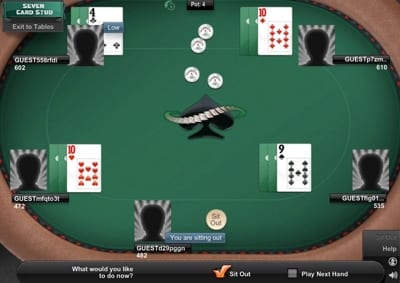 Regardless of how many players are sitting at your table, gameplay still begins in the same way; each player will pay a small ante to start the hand and then receive two cards face down and one card face up.

The player with the lowest card showing starts the betting, with an ace being considered high in this situation. 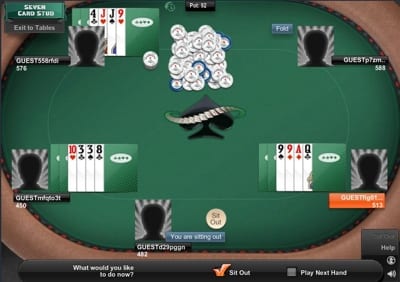 From this point on, the betting goes the same way throughout, with the 5th and 6th cards being dealt face up and the 7th card face down with a round of betting after each card.

In high stud, the best hand takes the whole pot at the end, whilst in hi/lo the pot is split between the high hand and the low hand, with the best low hand being Ace-2-3-4-5.

Similarly to Razz poker, one of the most important things to train for Stud Poker is your memory.  You always need to be paying attention to what cards are out and where they are on the board to accurately calculate your chances of hitting the cards you need.

As with all other types of poker, one of the most important factors here is knowing which starting hands to play. The best starting hand you can possibly have is two Aces in the hole (not showing) and an Ace showing.  The next best starting hands are pairs that are in the hole and then pairs with one of the paired cards showing.  Other strong starting hands are three suited cards or three cards with good straight opportunities.  Of course, a very important aspect of Stud Poker is watching which players are chasing cards and which players have made hands.  It’s not always easy to tell, but if you watch how players are betting/calling, that can give you a lot of info as to where they stand in the hand. 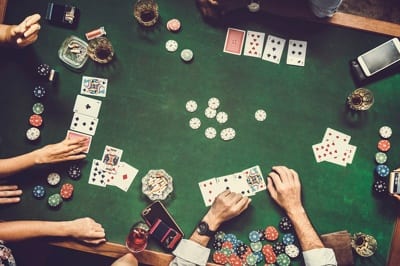 It is also important to watch the board to help calculate your chances are of hitting a card that can strengthen your hand: If you’re holding 4 cards to a straight and need only a 9, but two of the other three 9’s are already showing on the board, then you aren’t in a good spot to continue calling down hoping to hit your card, especially if that’s the only card that can significantly improve your hand.

When playing hi/lo you always need to be sure of what you’re going after, and of course, the best starting hand in hi/lo is Ace, 2, 3 all suited.  Your playing style for hi/lo will end up similar to a combination of how you’d play Razz and Stud.  Try to put yourself in the best spot to win either the low or high, and don’t shy away from playing to just win the low hand.  The same deal does go for playing for a low hand though, you need to watch the board around you and see what’s out there and which cards you need to hit your hand – and make sure you don’t get caught chasing cards for your low hand.

First two cards listed are the cards dealt face down.

Stud poker can be very profitable if you learn how to play competently and do so tightly and aggressively.  So hop on one of the online sites and enjoy a 7-card stud game, or 7-card stud hi/lo game – you can often play for free until you get the hang of it and have built up your confidence.