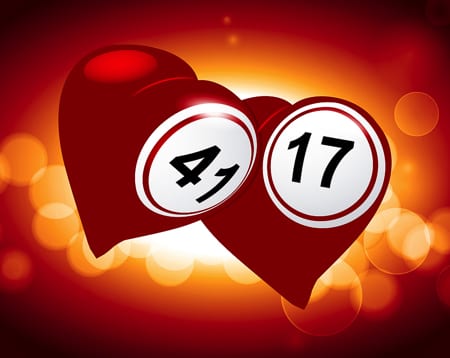 The world of bingo has become more and more aimed at a younger audience than we might traditionally imagine. Whether it be crazy versions of bingo games, such as Bongo’s Bingo, or simply the move to an online bingo platform, it is a form of betting that is now just as likely to appeal to younger people as to those that would once have been referred to as the ‘purple rinse brigade’.

Nowhere is that more evident than in the rise of engagements that have come about courtesy of bingo. It was largely a phenomenon that was limited to the online side of the game, but it’s also started happening in bingo halls up and down the country. Perhaps the excitement of the game has got people’s romantic juices flowing, or maybe it’s just that finding someone who also loves the game feels so incredible?

BingoCams is an interesting twist on the online bingo phenomenon, offering users a unique interface that attempts to marry (no pun intended) the world of real-life bingo with the online offering. In the real world, bingo players will be face-to-face, making it something of communal type of competitive game. By using webcams to connect bingo players, BingoCams brings that side of the industry to the online world.

Bingo is often a fast and frenetic game, with barely any time between ball draws for people to tick the number off on their card, let alone think about anything else. When Jose and Hannah, also known as russo26 and noonoo, met each other in a BingoCams room, though, they could hardly think about anything except each other. They seemed to have a connection, so after chatting for several weeks online decided to meet in real life.

That connection was equally as strong when they met in person, with the physical side of things being just as intense as on the emotional side. They continued to meet up regularly for several weeks, which was enough to convince Jose that he’d met the girl of his dreams. He proposed and Hannah said ‘yes’, meaning that they two of them were soon celebrating an engagement that was brought about by a mutual love of bingo.

Not long after the engagement, russo26 and noonoo moved into together, with Jose telling the team behind BingoCams that he was now hoping that he could ‘win the Progressive Jackpot to give us both the wedding we deserve.’ Obviously the story soon began to garner a bit of press interest, which certainly did BingoCams no harm in terms of attracting new users. A genuine feel-good story for the bingo crowd to celebrate.

For many people, marriage proposals are well thought out, considered things that are planned to perfection. In the case of Welshbabe93’s boyfriend, however, it was always going to be tricky to plan the proposal in too detailed a fashion. Knowing that she was a bingo lover and a keen player on BingoCams, his plan involved getting down on one knee when she won a jackpot on the site.

The reason for that is that hitting a jackpot is the only time that winners were broadcast to the full group, so he could only do it in front of her online bingo playing friends when she’d won some money. Amusingly, he did indeed jump off the couch and get down on one knee when she won some money, but before she noticed him the video feed cut away and the games carried on being played.

Everyone apart from Weshbabe93 knew what had happened, so they had to keep schtum as they waited for another win to come around for her and present her partner with another chance to pop the question. It took another two hours for that happen, but when it eventually did he was ready and sprang into action. Far from being the most romantic proposal ever, the entire thing is over and done with in twelve seconds.

Watching the video of the proposal, it’s difficult not to think that she knew it was coming. It’s not exactly the most emotional of engagements that you’re ever going to see, with the man jumping onto one knee, holding the box out and saying, “Will you marry me?” Welshbabe93 responds ‘yes’ in a somewhat monotone fashion, then the pair give the camera a thumb’s up after he’s put the ring on her finger.

A cynic might suggest that the entire thing was a setup, whilst the more generous could perhaps envisage a world in which she’d spotted him the first time around, been through all of the emotion of the experience and wanted to act it out again for the benefit of the BingoCam players who missed it the first time around. You’ll doubtless have your own opinion on the matter, but why not choose to believe the more romantic version?

The Proposal at Mecca Bingo

Whether it be because the communal nature of bingo tends to lead to friendships developing or because the major bingo halls encourage groups of people heading along to play some bingo, a number of people in physical bingo halls tend to know each other. Perhaps that’s why Aaron Stott chose the Mecca Bingo Hall in Birkenhead as the location for his proposal to his partner, Kayleigh Delamere.

The couple of thirty-year-olds regularly went along to the Mecca branch in the centre of Birkenhead, so Kayleigh will doubtless have thought it was just another night at the bingo when the pair attended together. What she didn’t know was that Aaron had been along earlier in the day to speak to the manager about being able to propose in between calls of the balls; though he didn’t get permission straight away.

What Aaron didn’t realise was that the bingo managers change over midway through the day, so he had to wait until the new manager came on shift and he could speak to them to make sure that it was all ok. As the bingo games progress, there is often a break later on and that was when the bingo caller said, “Aaron, I’ve got something for you”, handing him the microphone when he arrived.

He then asked Kayleigh to come up, saying that he had a question for her and that it was ‘the best place do it’. He got down on one knee and proposed, leading to cheers from the players and an announcement from the bingo caller that she was ‘getting emotional’. Kayleigh later revealed that she ‘wasn’t expecting it at all’. It was the right place to propose, she felt, as ‘we spend out time there a lot’.

Sadly, the story has a tragic ending. Having become something of an Internet sensation when Mecca Bingo released the video of the proposal online, Aaron Stopp chose to take his own life. Staff at Shrewsbury Lodge in Oxton on Merseyside found that he’d hung himself in his room just weeks after getting engaged. He ‘had a history of emotionally unstable personality disorder’ and his post-mortem revealed cocaine in his blood.

Proposals are the ultimate part of romantic journeys, but it’s not just those that have been the story of the bingo world over the years. Love and bingo can often be found together and stories revealing as much deserve a quick mention. 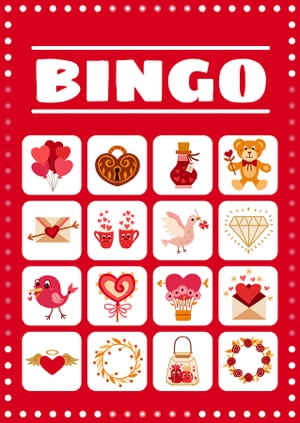 At around the same time that the story of russo26 and noonoo’s romantic entanglement hit the news, BingoCams announced that they were planning to run a Speed Dating room. Rather than doing so on the 14th of February, when romance is typically in the air, the folks behind the site decided that they’d take advantage of it being a leap year and chose to do it on the 29th of February.

That, of course, is traditionally the day on which women ask men to marry them, but BingoCams chose to give people an unorthodox way of meeting Mr or Mrs Right. They offered 60 spaces in the room and promised 18 rounds of bingo, with ‘Roxy’ acting as the host and playing the part of cupid. With a ratio of 33% to 67% male to female on the site, the men were in the position of being able to be a bit fussy.

Whilst not an engagement, the story deserves its place on this page because of the tie between love and bingo. We don’t know whether any long-lasting relationships emerged from the speed dating experiment, but Vikki Taylor, the BingoCams Marketing Manager, said at the time,

Bingocams has always understood the importance of the community aspect to bingo and our speed dating room is another fun way to help bring our players together, and who knows we might see our first Bingocams marriage!

Far from a traditional love story and not exactly one that is true in the real sense, the Bingo Love comic was published by Image Comics. It features two women, Mari and Hazel, who meet for the first time whilst playing bingo at their local church hall. Hazel fell for Mari at first sight, even though the story is set in 1963 and LGBTQ+ relationships weren’t exactly commonplace so she wasn’t sure what her feelings meant.

The notion of two black women from conservative families falling in love was practically unheard of, so they got married to separate people and had families, not meeting again for almost fifty years. Hazel went to a Mother’s Day Bingo with her eldest child where bumped into Mari again, giving the pair a chance to rekindle their romance, kissing each other in front of everyone at the church.

Whilst we don’t know how much of the Bingo Love comic strip is based on real life, it is certainly worth mentioning for the fact that the writers, Tee Franklin, Jean St. Onge and Joy San, chose to set it in the world of bingo. Stretching across generations, it is, perhaps, indicative of how the game of bingo can be a great leveller, as well as a chance for people to meet and share experiences.

Previous Post: « How Do Megaways Slots Work? Play With Up to 117,649 Paylines!
Next Post: What Happened to Bet Butler? »