The National Lottery first became a going concern in the United Kingdom in 1994, effectively killing off the football pools that had been so popular until then. At the time that it was launched, Camelot won the right to run the National Lottery in the UK, beating seven other companies for the right to do so. There have been two other tenders for it since then, with Camelot winning all of them. The company was formed by International Computers Limited, Racal, Cadbury Schweppes, De La Rue and GTECH Corporation, with staff seconded from each.

During their time in charge to date, Camelot have overseen numerous different changes to the way in which the lottery is run, including the 2004 launch of the transnational EuroMillions. The company has also been responsible for the Illinois State Lottery in the United States of America since 2018, with the various bodies being owned by Premier Lotteries Investments UK Limited. The tender is due for renewal, however, and so it looks as if Camelot’s time in charge of the National Lottery in the UK might be coming to an end.

When it became clear that the United Kingdom would be getting a National Lottery, numerous different companies moved to win the tender to run it. It was clear that it could be big business, so a consortium was formed of Racal, International Computers Limited, Cadbury Schweppes, De La Rue and GTECH Corporation, each of whom had their own responsibilities and expertise. Racal, for example, had knowledge of the communications network, whilst ICL supplied the hardware, software and expertise on the system integration.

Cadbury Schweppes were brought on board in order to offer their knowledge of consumer marketing, as well as corner-shop retail. De La Rue, a bank note printing organisation, took on the responsibility of printing the tickets securely, with GTECH Corporation brought in to supply application software. It took the newly formed company, which was made up of staff seconded from the various organisations, 24 weeks to build an infrastructure that would allow people to play the lottery, installing terminals at in excess of 10,000 retailers.

Camelot had also installed the largest communications network that the United Kingdom had ever seen, offering something that was the equivalent of the four biggest British banks combined. The likes of Tim Holley had been brought on board once the bid was successful, having defeated a bid from Richard Branson, who had suggested a not-for-profit structure that the United Kingdom Gambling Commission did not enjoy. The company’s name soon began to be reflected in the names of the machines that drew the numbers, with Lancelot, Guinevere and other Arthurian Legend names being used.

The Tenders So Far

By the time that the first licence that had been issued to Camelot was reaching its conclusion, the excitement that surrounded its initial launch had started to wear off. Controversy in 1997 over the six-figure salaries paid to some of the Camelot executives had taken the shine off things, whilst the bidding process for the tender of the second licence was seen to lack clarity. The bid process in 2000 was protracted, with Richard Branson seeking £18.5 million in compensation when he lost the bid; a claim that was rejected.

In Branson’s defence, the commission had said in August of 2000 that his People’s Lottery was their preferred bid and would win the licence if they met certain conditions. Camelot then forced their way back into the reckoning, going to the High Court in order to do so. Despite the Virgin-mogul’s attempts to force a different decision, Camelot’s second period in charge of the UK’s National Lottery got underway in October of 2001, with the organiser promising to raise about £15 billion for good causes over the period of their tender.

When the third term came up for tender, Camelot’s fight was a much easier one. The only serious company that appeared to put up any sort of fight for the right to run the National Lottery in the UK was the Indian lottery group, Sugal & Damani. Camelot, somewhat unsurprisingly, won again by beating away the Delhi-based conglomerate. Even so, the losing company did respond to the tender being awarded to the incumbents by saying that Camelot had been given a ‘licence to under-perform’.

We are now approaching several decades since the lottery was first launched in the UK, so questions about who owns the company that runs it are entirely understandable. The decision about who gets to run the lottery is the auspice of the United Kingdom Gambling Commission, which is a body that has long made decisions that some would find confusing. The National Lottery being awarded to Camelot so regularly makes some sort of sense, given the fact that the company has been operating successfully for 24 years.

When it comes to the current owners of Camelot, it is likely that you will be surprised to find out who it is. Since 2010, the organisers of the National Lottery have been owned by the Ontario Teachers’ Pension Plan, a Canadian body that is independent and is responsible for wisely investing the pensions of school teachers in the Canadian province of Ontario. By December of 2017, it was believed that they had an operating budget of $189.5 billion. They used some of this to buy a share of the Irish National Lottery in 2014.

When the OTPP bought Camelot for £389 million, they did so at a time when they already had a range of investments in the United Kingdom. This included the likes of Bristol and Birmingham Airports, as well as 27% of Northumbrian Water. They bought into Camelot after it had been awarded a 10-year licence to run the Lottery, with the Senior Vice-President for Public Equities, Wayne Kozun, stating that they wanted to help the Camelot business ‘realise the full potential’ that was available to them. 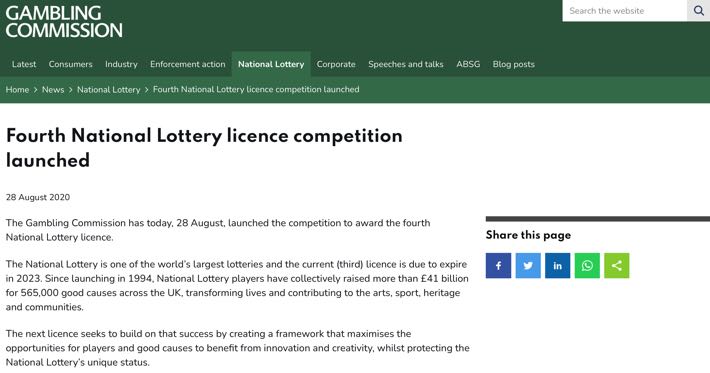 The Gambling Commission announced the launch of the process to award the fourth tender for the UK’s National Lottery licence in August of 2020, with the initial plan being that it would last for more than a year. Those that formally wished to be considered were asked to register their interest, after which the relevant parties would receive an Invitation to Apply. The previous tender was due to run out in 2023, with the fourth licence including a ten-year fixed licence to give the buying company time to invest properly.

In August of 2021, a year after the tender was launched, the UKGC confirmed that it was pushing the selection of the winner back until February of 2022. As a result, Camelot’s licence was also extended for an additional six months, meaning that it would remain in charge of the lottery until February of 2024. The decision to postpone the announcement was made in order to give companies an additional four weeks to make their bids, as well as an additional six weeks for the Gambling Commission to evaluate all of the bids.

In October of 2020, Camelot completed the Selection Questionnaire, but by August of the following year had still not confirmed whether or not it would actually bid for the tender. As a result, the other companies involved in the bidding process began to believe that it was possible that a different company would end up running the United Kingdom’s National Lottery for the first time since its launch in 1994. At the time of writing, there are a number of different companies that have put their hats into the ring to do so, so we’ll look at them here:

The Czech Republic company SAZKA Group rebranded as Allwyn in April of 2021 in order to help its bid to run the National Lottery. Labelling itself as ‘one of Europe’s largest and most successful national lottery operators’, the company already runs lotteries in its native Czech Republic, as well as the likes of Greece, Cyprus and Italy. They serve more than 79 million players, promising annual sales of more than €17 billion. As with Camelot in the UK, they ‘support direct community investment’ by financing a range of good causes.

Rather than merely depending on their experience of running the lottery elsewhere on Europe, Allwyn put together an advisory board that featured the likes of former Sainsbury’s Chief Executive Officer Justin King and Air-Miles guru Keith Mills. Speaking to the Daily Mail, Mills said that Camelot have depended on ‘fewer players playing much more often’, but that Allwyn’s plan would be to drive consumers back to the high street. He said that they would opt for ‘a footfall driver, a reason for regular visits’ that Camelot have lacked.

Sisal was created in 1947 in Italy specifically to operate gaming products as a form of entertainment. In the years that followed, according to the company’s International Development Director Camilla Folladori, they ‘developed an expertise in any kind of gambling product’. Around 50,000 Point Of Sale retailers are managed by Sisal in Italy, with the company having been the sole licensee of the SuperEnalotto in the country since 1997. That means that the company has about as much experience of running a major lottery as Camelot.

Sisal will also be hoping that their bid will appeal to the Gambling Commission as they have partnered with the charity Barnardo’s. This is not just lip service either, with the plan being for Barnardo’s to have a place on the board so that it can play an ‘active role’ in how Sisal approach running the lottery in the UK. The idea is that the presence of Barnardo’s will ensure that a sensible approach to responsible gambling will be taken with every decision that the company makes. Folladori believes that Sisal’s ‘core strengths’ mean that they have a chance of winning the tender.

Having missed out on the chance to win the right to run the National Lottery when it lost out on the 2007 tender to Camelot, Indian firm Sugal & Damani are back for another try this time around. The business, which is based in Delhi, has an interest in the likes of utilities, stockbroking and IT as well as lotteries. The company believes that the fact that is has previously demonstrated a ‘deep interest in operating the UK National Lottery’ will stand it in good stead this time around, having been a ‘reserve bidder’ at its last time of asking.

When it made its bid in 2007, local media suggested that the company would look to donate back any net win above 1%, in addition to launching some new games. At the time of writing, they run lottery and gaming services across 26 jurisdictions, with the technology that it offers used at more than 200,000 Points Of Sale. There are seven million active customers over the 70 games that the company runs. Speaking of the tender, the group’s CEO, Kamlesh Vijay, said, “We are looking for a fair and open competition [and] are very much in the game.”

Previous Post: « How Often Do Jockeys Get Injured or Killed in Horse Racing?
Next Post: Is Gambling Illegal in Dubai? »