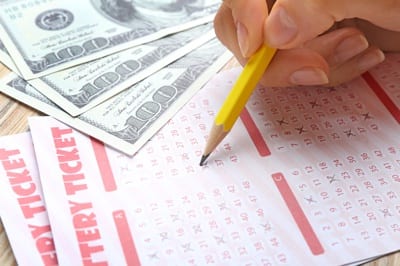 Those of us that play the lottery, while away our hours dreaming of how amazing it might be to pick the winning numbers, planning what we’d do with our new found wealth. From setting up a charity fund to buying a collection of expensive cars, we each have our own dreams and fantasies. Not all lottery wins are that big, of course, with some being big enough to allow the winners to treat themselves and their families to some nice things but not exactly give up work and live the high life.

The nature of lotteries, though, is that some wins are astronomical. They can be so big as to propel the winners into a whole new stratosphere of living that they didn’t expect even in their wildest dreams. No longer is just a collection of expensive cars on the menu but rather the company that produces them. As the years have past, so too have the goalposts moved on what a large win actually means. From the early days of the National Lottery, seeing £5 million or so as a huge windfall through to the EuroMillions changing the landscape entirely, to say nothing of the enormous wins in the US. Here’s a look at some of the biggest lottery wins ever.

How the US Lottery Works 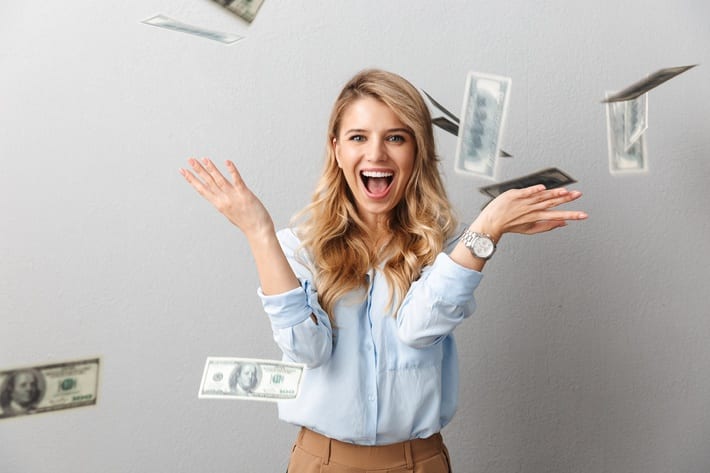 Before we take a look at the big wins from around the world, it’s worth taking a quick look at how the lottery works in the United States of America because it changes just how impressive the wins are. The main lotteries in the US are state-wide, meaning that they can reach truly eye-watering levels of wealth. In 2016, for example, the Powerball hit a figure of $1.586 billion before being won by three different tickets.

The big difference between lottery wins in the US and in the United Kingdom is that winnings aren’t subject to taxation in the UK. In America, however, all wins over $600 are immediately reported to the Internal Revenue Service and are automatically subject to Federal taxation rules. Any win worth more than $5,000 sees the IRS take a minimum withholding over 25% of the prize money. If the winner is a non-US resident, then that moves to 30%.

For that reason, the winners of jackpots in the United States can make a choice between taking an annuitized jackpot or a lump sum. The cash value of the $1.586 billion jackpot, for example, was actually $983.5 million, breaking down as $327.8 million per winning ticket. The winner would have had to decide whether to take a lump cash sum or to be paid on a consistent basis over a series of years.

To look at a specific example, the jackpot on the Mega Millions stood at $500 million in 2012. The winners could decide between taking a lump sum of $359.4 million or else an annuity of $19.25 million every year for twenty-six years. The latter would see them receive the full amount but only getting it in smaller segments, whilst the former would see them get more money than they could dream of but about $140 million less than the full prize. All figures are also before tax, which would be 25% for the IRS and between 6 and 9% in additional state tax.

The Mega Millions Winner in 2018

Now that we’ve got more of an idea of how the prize money is paid out for the gigantic American prizes, we can begin by having a look at just such an example that was paid out in October of 2018. The US’s Mega Millions jackpot had reached a mind-boggling $1.537 billion and was won by just one ticket holder. They lived in South Carolina, where lottery winners have the right to remain anonymous if they so wish and that was a right that the winner understandably chose to exercise.

The winner didn’t come forward until just a few weeks before the one hundred and eighty day deadline to claim would have passed, at which point she was faced with a decision of whether to take an annuity of around $53 million per year for twenty-nine years or a one-off payment of $878 million; once again with both options being before tax. In the end, she opted for the lump-sum and her lawyer informed the press that she planned to make donations to numerous charities.

As mentioned earlier, the Powerball prize reached $1.586 billion before eventually being won by three different ticket holders in January of 2016. Lisa & John Robinson in Tennessee were joined on the winner’s podium by California’s Marvin & Mae Acosta and Maureen Smith & David Kaltschmidt from Florida. There were faced with a choice of the lump-sum of $327.8 million for each winning ticket or annuity payments for the full pre-tax amount of $533 million.

The Robinsons went onto the Today show and revealed that they had decided to take the lump-sum, saying ‘we’re not guaranteed tomorrow’. Maureen Smith and David Kaltschmidt also chose to take the lump sum, with Kaltschmidt admitting that he didn’t believe his wife when she told him that they’d won. The Acosta’s remained anonymous for some time, eventually revealing themselves and taking the lump-sum also.

The EuroMillions Ticket That Made Winners Richer Than a Beatle

In 2011, the EuroMillions jackpot reached £161 million, which translated roughly as $260 million and was therefore still a way off the $327.8 million most of the 2016 Powerball winners chose to take home with them. That being said, the winners in the US had to pay their share of both Federal and State taxes, meaning that they probably ended up taking home about the same amount as Colin and Chris Weir who didn’t have to give up any of their prize.

The Weirs had originally considered remaining anonymous when they realised that their numbers had come in on the huge win, but they changed their minds when they realised that it would involve having to lie to their family and friends. The couple were retired when their numbers came in and the £161 million prize made them richer than the Marquess of Bath, also putting them on the Rich List ahead of Ringo Starr of Beatles fame. To give you some idea of just what a large prize amount that is, it was roughly half of what the country of Scotland collected in taxes each month.

The Pensioner Who Won $590 Million 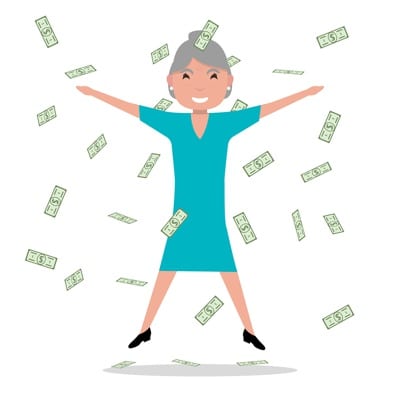 Back to America for the story of Gloria MacKenzie, who won a then-record amount of $590.3 million on her own. It was the second-largest such jackpot at the time, but the first to be won by just one person. Once more faced with the choice of taking annuity payments or a lump-sum, the eighty-four-year-old figured it made the most sense to go with the one-off payment of $370.8 million. That would work out at about $252.2 million after State and Federal taxes were taken off, or approximately £193.6 million.

The mother of four who was also a great-grandmother chose not to speak to the press but her name was revealed regardless because the State of Florida does not allow for winners to remain anonymous. She did, however, reveal to the lottery officials that the person in front of her in the queue to buy tickets let her go in front of him. Had he also been planning on buying a Quick Pick ticket? If so, how must he feel to know that he could have been walking away with the winning ticket if he hadn’t been so generous in letting her slip ahead of him in the queue? 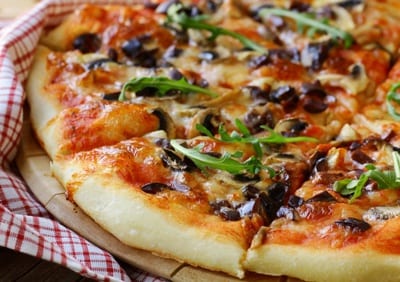 In all of the dreams that people have about what they’d do with their winnings if they won a sum of money in excess to that belonging to Premier League footballers and best-selling musicians, how many people say that they’d order a Dominos and then fly up to Scotland? That’s exactly what Adrian and Gillian Bayford decided to do when they discovered that they were the only winners of the £148.6 million EuroMillions jackpot in 2012. The couple from Haverhill scooped the second-largest jackpot in Europe, the result of fourteen consecutive rollovers.

This propelled them to 516th place on Britain’s Rich List, which meant that they had more money to their names than the likes of Kylie, Calvin Harris and Andy Murray. The couple ‘lived within their means’ before their win, but after their numbers came in, there wasn’t much that would be out of their means. As sometimes happens to lottery winners, however, it wasn’t all sunshine and lollipops, with the couple announcing their plans to divorce in November of 2013. He later married a stable girl after a whirlwind romance of six weeks, but she also left him and took £30,000 worth of thoroughbred horses with her.

It’s not just in America and the UK where lottery winners can pick up a huge amount of money. The EuroMillions jackpot is capped at €190 million, so if it hits that amount then the prizes lower down keep increasing in size as the wait for a winner goes on. That’s what happened back in 2017, when nobody won the top prize on the Tuesday night and so it moved to the Friday instead. The rollover meant that the prize pool for the second-tier increased, resulting in sixteen ticket owners picking up €1.2 million, which amounted to around £900,500.

Whilst all sixteen winners would no doubt have been delighted by their win, it was as nothing compared to the €190 million picked up by one winner in Spain. It was an amount that had only been one twice before, with one such win coming for the Bayfords in 2012 and the other being picked up by an anonymous victor in Portugal two years later. The Spanish winner also decided to remain anonymous, with the only information available about them being the location where the ticket was bought. The answer to that was that the ticket had been sold by a store in El Mirador’s shopping centre in the city of Las Palmas on the Canary Island of Gran Canaria.

Here’s a quick look at the ten biggest wins as of April 2019, with the winning amount changed according to the currency exchange value at the time. As they are all US winners we’ve given the lump-sum amount before tax that each winner took home, rather than the overall total that was split:

Previous Post: « The Rise & Fall of Online Poker
Next Post: Pigeon Racing: Everything You Need to Know (And Then Some) »