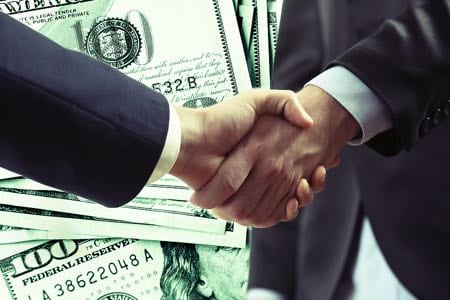 In the film It Could Happen To You, Nicolas Cage plays a New York City cop who doesn’t have enough money to tip his waitress, so instead promises her that if his lottery ticket wins then he’ll share the winnings with her. It wins, rewarding him with $4 million and he returns to the diner and gives the waitress half of it. Whilst based on a true story, it doesn’t come close to the tail of Joe Feeney and Tom Cook.

In 1992, the two best friends made a pact that they sealed with a handshake – if either of them won the United State Powerball lottery then they would share it between them. When Cook’s numbers came up nearly thirty years later he got straight on the phone to Feeney to let him know that they’d be sharing the £17 million jackpot; a fact that left Feeney ‘stunned’.

Powerball, one of numerous lotteries that can be played in the United States of America, arrived in the state of Wisconsin in 1992. Whilst neither man can remember exactly when they made the pact to share the winnings if either of them won the Powerball, the one thing that is beyond dispute is the fact that they shook hands to seal the agreement. A handshake that would pay dividends.

Tom Cook, who lives in Elk Mound in the state, said, “It happened years ago and it just kind of continued. A handshake’s a handshake, man.” Feeney, meanwhile, couldn’t believe it when his friend called and replied to the news by saying, “Are you jerking my bobbler?” His bobbler was very much unjerked, so the keen fisherman realised that the pact he’d made 28 years before was going to make a great impact.

Making a pact is one thing, but sticking to it is something else entirely. Numerous people have doubtless made similar such pacts without ever actually giving the other person the money when they’ve hit the big time. The same isn’t true in the case of Cook and Feeney, however, who stuck to the pact and shared the $17 million when Cook’s numbers came in and presented him with a huge lottery win.

Because of the manner in which lotteries work in America, they had a choice of taking $22 million over a period of time or a smaller prize immediately as a lump sum. That meant that they would split $16.7 million, with the actual amount that they banked being a little smaller than if they’d split that exactly. That’s because tax laws are different in the US to how they are in the United Kingdom.

In the UK, gambling winnings are not subject to tax. In America, however, they are and so after both state and federal tax was taken off the winnings, both men took home $5.7 million. In the case of Feeney, of course, it’s not a bad amount to see enter your bank account when it wasn’t your numbers that came up. He and Cook had remained friends and, for Cook, it seemed the obviously right thing to do.

What the Lottery Board Had to Say 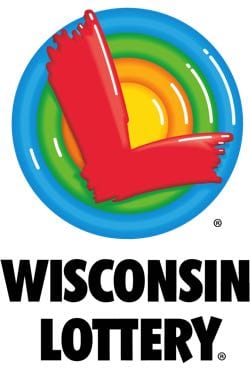 The Wisconsin Lottery Director, Cindy Polzin, said that she was ‘thrilled’ for the men, with ‘the power of friendship and a handshake’ having paid off. Cook had bought the ticket at Synergy Coop at Exit 45 on 2100 County Rd. B in Menomonie where he lives. Polxin said, “Congratulations to Tom, Joe, and their families….I’m thrilled for them—their lucky day has arrived!”

Both men will doubtless be delighted with the winnings, which was the first time that the Powerball had been won in Wisconsin since March 2019. Even so, they might well be privately cursing that it wasn’t that ticket that they’d seen the numbers come in for, given that it was worth a record-breaking $768.4 million. Powerball tickets cost $2 in the state and the overall odds of winning are 292,201,338.

The Plans of the Winners

After confirming that he wasn’t, in fact, pulling his friend’s bobbler, Tom Cook gave his two weeks’ notice in order to retire from his job. Joe Feeney had already retired from the fire department, meaning that the two men could look forward to spending more time together fishing and going on road trips. The pair had been joined on one such trip in the past by their wives, travelling in a PT Cruiser convertible.

It goes without saying that the car will be getting an upgrade for the new trip. Cook said, “We can pursue what we feel comfortable with. I can’t think of a better way to retire.” They also said that it was likely that the two couples would spend time travelling to go and visit various family members. That, it seemed, was about as extravagant as their plans would be during the initial phases of their lives as millionaires.

Feeney and Cook aren’t the only people be honourable when it comes to lottery winnings. There are other tales of people keeping their word, as well as some instances of people being remarkably dishonourable…

The New York Cop & The Waitress 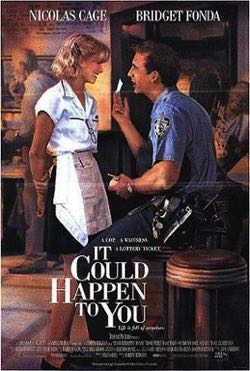 The 1994 film, It Could Happen To You, which we mentioned earlier in the article, was based on a true story. A decade before, New York police detective, Robert Cunningham, had been enjoying some pizza in one of his usual haunts, South Pizzeria in Yonkers. He jokingly asked the waitress, Phyllis Penzo, if she’d accept sharing a lottery ticket instead of a tip.

Penzo accepted, with each of the pair choosing three numbers each. As you might well have guessed, the numbers came in and the pair had winnings of $6 million to share. Unlike in the movie, where Nicolas Cage and Bridget Fonda’s characters don’t know each other, Cunningham and Penzo had been friends for 15 years and were regularly engaged in a bit of friendly ribbing.

It would perhaps have entered Penzo’s mind that he friend was taking the mickey, therefore, when he called her at nine in the morning on the first of April to say that their numbers had come in. Rather than being a cruel April Fool’s Day joke, however, it was absolutely true and Cunningham was true to his word. Rather than taking a lump sum, thereby missing out on some of the winnings, they took the annual payment option.

This meant that both Cunningham and Penzo would receive $287,715 each every year for 21 years. A tidy amount for a New York City cop and a waitress in a pizza joint, allowing Cunningham to build onto the house that he shared with his wife and family. Penzo, meanwhile, bought a house of her own, went travelling and bought a car for both her husband and her daughter.

The Woman Who Didn’t Tell Her Husband

Sadly, not all such stories are heart-warming ones. Denise Rossi of California worked in a clothing design firm and her and her colleagues used to run a lottery syndicate. They would pool their money to buy tickets and in 1996 their numbers came up, resulting in a $6.6 million win. It meant that each of them won $1.3 million, but Rossi didn’t want to have to share hers with her husband.

As a result, she kept the winnings a secret and filed for divorce just 11 days later. The divorce was ending a 25 year marriage in which her husband, Thomas Rossi, felt that they were perfectly happy. The divorce court was told that he’d never strayed, doubted his relationship or saw a marriage counsellor. The pair even shared an electric toothbrush, such was the closeness of their relationship.

When he found out that his wife had hidden her lottery winnings from him, though, and that that was the reason behind her desire for a quick divorce, Mr Rossi was obviously not pleased and decided to counter-sue. Superior Court Judge, Richard Denner, ruled that she had violated the state’s asset disclosure laws and acted out of ‘fraud or malice’. The judge in the case ordered that every penny of the winnings be paid to the husband.

Speaking retrospectively, Mrs Rossi’s own attorney believed that she might well have had a chance of holding on to some, if not all, of her winnings if she had disclosed them to him during the divorce proceedings. Connolly K. Oyler of Santa Monica said, “I could have argued successfully that it was her separate property. Or we could have argued and we would have reached some adjustment. But the judge got mad and gave it all to him.”