Any time that we right about lotteries, we point out the fact that for most people winning one would be a dream come true. This is based around the idea that winning millions of pounds would help the vast majority of society feel more comfortable than ever before, even if not everyone reacts to winning vast sums of money in the same way. The reality is that most people buy lottery tickets and scratch cards because they want to see thousands, hundreds of thousands or millions of pounds paid into their account as soon as possible.

In the United Kingdom, the lottery conversation is an easy one, insomuch as there is no tax taken off your winnings. Tax on gambling in the UK works differently, on account of the fact that it is paid at the point of consumption rather than by the winner. As a result, the headline amount that you think you’re winning is what you’ll end up being paid. This is different in other parts of the world, however, meaning that the advertised jackpot isn’t the same as the take-home amount, so which countries take how much of your lottery winnings?

The UK as a Touchstone

The United Kingdom is imperfect in many different ways, not least of which includes the split down the middle of society that was brought about as a result of the Brexit referendum. One of the ways in which gamblers think the UK is better than other countries comes in the form of the way that the government treats gambling winnings. More specifically, the fact that people winning something courtesy of betting wouldn’t even know that there had been tax paid on the winnings at any point during the journey to their bank.

That’s because the betting duty that asked players to pay tax on their winnings was abolished in 2001, instead seeing betting companies pay tax in a number of different ways. The tax on gambling in the United Kingdom is too complex to cover in detail here, but how much needs to be paid, when and by whom will differ according to a number of different factors. Bookmakers began paying a 15% levy on their gross net wins from 2001 onwards, with a 15% point of consumption tax being added in 2014 and raised to 21% in 2019.

This means that a lottery win of, say, £25 million in the UK will result in the lucky person being paid £25 million, with no tax due on said winnings. Things get more complicated if you wanted to start gifting money to friends and family or if you begin earning interest on your winnings, but the initial payout will be exactly what it says on the tin. Of course, betting companies aren’t stupid and so they pass the tax onto you in the form of the vig or edge, but you don’t notice it so it’s not really worth worrying about.

America as the Opposite End of the Scale 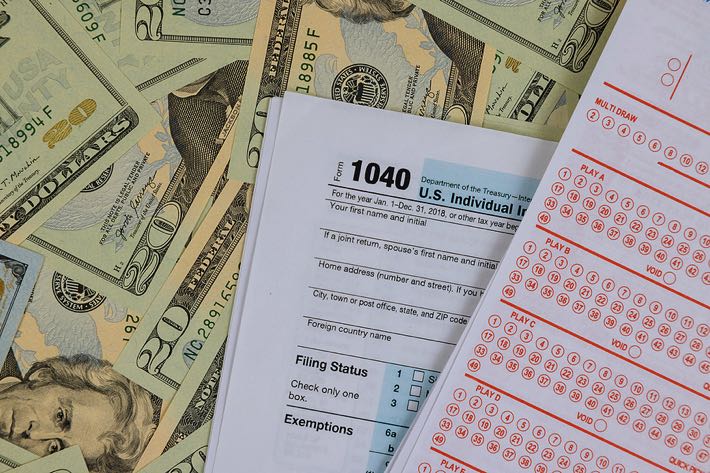 At the opposite end of the scale to the UK in terms of money that is taken off your winnings is the United States of America. This is because the United Kingdom, though made up of different individual countries, is one large unit when it comes to the laws and rules that are passed around something like gambling. In the US, however, there is one overall rule and then each state is able to come up with its own rules and regulations. Consequently, a win courtesy of gambling will be reduced by the payment of state and federal taxes.

Whilst the eye-watering sums of money promises by lotteries are still impressive even after you’ve taken the tax off them, they’re slightly less phenomenal than they might otherwise be. When it comes to lotteries, Americans can choose whether they want to be paid in a lump sum or in an annuity, with the latter resulting in them being paid small amounts over a period of time, such as 30 years. In 2016, for example, there were three winners of the $1.586 billion Powerball, who could choose $533 million each before tax paid over years or $327 million as a lump sum.

Once the winnings have been paid, the winners then have to pay federal tax and possibly state tax. This is the case on anything that is considered to be a ‘substantial amount of money’, which is generally considered to be something over $1,000, depending on what you won the money on. 24% will be deducted from your winnings and sent to the Inland Revenue Service directly, with winners being given a Form W-G2 as proof of payment. Winnings on a game of skill, meanwhile, aren’t immediately taxed but you’re still expected to report them and pay tax.

How Different Countries Around the World Tax Gambling Winnings

We could go in to more detail on how winners in America find themselves being taxed, but that’s not what this page is about. Instead, we’re looking at the manner in which different countries react differently to gamblers and the money that they win. At the time of writing, there are 193 member states of the United Nations, as well as Holy See and the State of Palestine, which are considered to be non-member states. With 195 countries to speak of, it would be far too time-consuming to outline the tax rules of all of them.

On top of this, there’s also the fact that many countries around the world ban gambling altogether, meaning no tax would be due on gambling winnings as it technically wouldn’t have happened in the first place. There are some countries, such as Cambodia and Singapore, where gambling is illegal but state lotteries are ok. This obviously further confuses the matter, so instead of looking at every country around the world, we’re instead going to focus our exploration on the major countries of Europe, South America and North America.

Here’s a look at the different countries in question and their approach to lottery wins. It’s worth noting that things become much more complicated if you’re a resident in another country and win the lottery somewhere else, especially if the country where you win charges tax on winnings but the country of your residence does not. Even so, here’s a look at different countries and their tax rules:

Obviously, this list is far from exhaustive and whether the lottery chosen for each country is truly the biggest lottery in every case is a matter for debate. In most European countries, for example, you can play the EuroMillions, which regularly boasts a higher payout than the lottery specific to that nation. Even so, we’ve decided not to count that as it complicates matters slightly, instead choosing to focus on the individual lottery that you can play in the country in question. There are often variations of the lottery too, but we’re ignoring them.

It’s worth noting that the list we’ve compiled earlier was correct at the time of writing, but that things can change at any moment when it comes to a country’s taxation system. A new political party could come to power and change everything about the way that the country in question operates, including the idea of taxing lottery winners or, conversely, dropping the tax that lottery winners have to pay. It is also important to remember that how much will be paid in tax will differ from country to country but is too complex to go into here.

What It Means for Winners 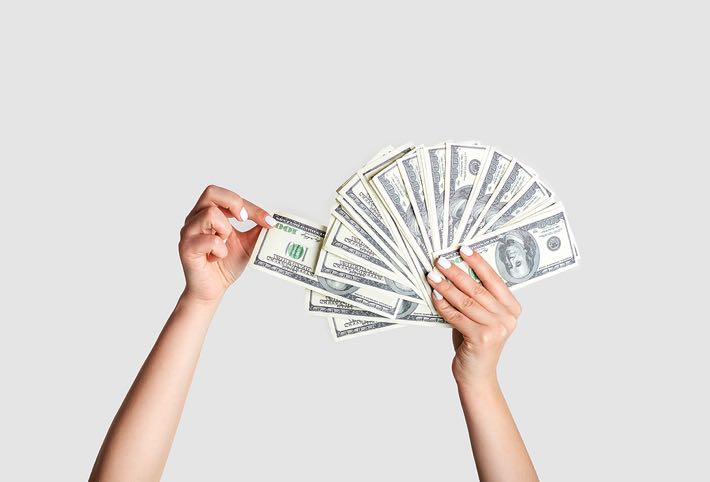 What all of that means for winner of lotteries is that where they win will dictate how much tax they have removed from their winnings. The reason we deliberately outlined the United States of America earlier was that winners there will often get hit with a double-whammy of both state and federal income taxes, seeing their winnings reduced considerably on what they thought they would be. On top of that, there’s also the loss of money that comes with taking the lump sum rather than the annuity option for payout.

On that front, there is anecdotal evidence to suggest that lotteries attempt to persuade people to take the annuity, even though many lottery winners later sell the annuity to a third-party in return for a lower cash amount. In other words, it’s not just the taxman that gets to dig his claws into your winnings when you’ve struck lucky on a lottery play. As a result, playing the lottery somewhere where you’re less likely to have to pay any tax on your winnings is unquestionably a sensible decision, even though the choice isn’t always yours to make.

The reality for most people is such that any form of lottery win would be very exciting. The fact that you have to pay tax on winnings doesn’t change the fact that you hit the jackpot in the first place with money you never would have had otherwise. As a result, many of you might be reading this and thinking that you’d love to have to worry about whether you need to pay tax on your £500 million prize money. What you need to remember, though, is that it’s not just the jackpots that are hit with a tax bill in countries where winners pay tax.

Even winners of smaller prizes, which can still amount to a decent amount of money, will have to pay tax on their winnings in the countries that ask for tax to be paid on ‘significant’ sums of money. A £30,000 prize would seem like a huge deal when you hit it, but if you’re charged 24% tax on that, as in America, it suddenly drops to less than £23,000. Not an insignificant sum of money by any stretch of the imagination, but sadly, not quite what you were hoping you’d be getting paid into your bank when your numbers came in.

Previous Post: « Why Is Cannabis a Banned Substance in Sport?
Next Post: Footballers in Prison: Which Players Have Spent Time Behind Bars »