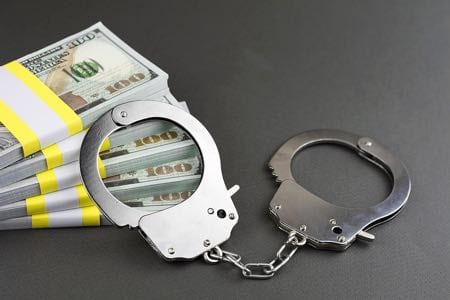 For most people, the idea of winning the lottery is a dream with millions of pounds potentially entering your account overnight. Millions of people around the world buy lottery tickets on a regular basis, desperately hoping that one day it will be their numbers that come out of the machine. It’s understandable too, given the eye-watering sums that can be won in lotteries all around the world.

However, there are some people for whom the job of waiting to win the lottery legitimately either seems like a pipe dream or else would take far too long to happen. Rather than spending the money buying tickets and waiting for their numbers to come in, they have looked for nefarious means to see themselves become rich. Lottery organisers are quick to such methods, though, so cheating rarely prospers. Here’s a look at some of the biggest examples of those that tried.

Most people understand that organisations, such as Camelot, which is responsible for the British National Lottery, have systems in place to ensure that people coming forward with tickets really did win the draw. Whilst your local church fete might well not have any way of telling whether the raffle ticket you say was a winner actually came from them, the same is not true of lottery organisers, as Edward Putman found out to his detriment.

The fraud that Putman attempted was remarkably sophisticated, thanks to the fact that he did it with the help of someone who worked for the National Lottery’s Fraud Detection Department. Putman claimed that he’d found the winning ticket underneath the seat in his work van, coming forward just before the deadline to claim the win had passed. In reality, he and Giles Knibbs had created a forged ticket that Knibbs knew would pass muster with Camelot.

Putman came forward with a badly-damaged ticket on the 28th of August 2009, with the ticket having been forged by Knibbs. Knibbs had seen a document that detailed big wins that hadn’t been claimed, with the pair using a degree of trial and error before enjoying success. They created a series of tickets, each of which had one of 100 possible unique codes on the bottom of it, with Putman going to 29 different shops before finding the right one.

Knibbs was paid £280,000 to create the ticket, with future payments totalling £50,000. Putman received the jackpot from Camelot in September of 2009, even though the bottom part of the slip was missing its barcode. In the end, it wasn’t the lottery fraud that Putman was caught out for, but rather the fact that he fraudulently claimed £13,000 in housing benefit as well as income support, receiving a sentence of nine months in jail three years later.

Putman had been jailed in 1993 for rape, later receiving income support due to anxiety. He failed to attend a medical check-up in 2009 and had his benefits suspended in April of the following year. In July of 2010, ten months after becoming a millionaire, he wrote to the Department of Work and Pensions and asked to have his benefits re-instated, which they agreed to. At the time, he was buying sports cars and a house.

The deception didn’t come to light until Knibbs and Putman had an argument over the sharing of the winnings, with Knibbs eventually killing himself. He took his own life in October of 2015. The judge in the case told Putman that he would have got away with it but for his own greed, whilst the case ‘struck at the integrity of the National Lottery.’ Putman, meanwhile, undermined the public’s trust in the lottery itself.

The Pittsburgh Personality That Tried to Rig the Lottery

Nick Perry was a well-known personality around the Pittsburgh area, largely thanks to his work as the Master of Ceremonies on the TV program that showed the drawing of the state lottery’s numbers. In 1980, Perry was involved in a scheme to fix the Daily Number, which was a three-digit game that ran alongside the Pennsylvanian Lottery. It perhaps does Perry a disservice to say that he was involved, given that he was actually the plan’s mastermind.

Perry owned a vending machine business with Jack and Peter Maregos, with whom he discussed his plan originally. He then approached a letter expert called Joseph Bock about creating replicas of the balls used for the lottery draw, but adding weight to some of them to decrease the chance that they would be drawn. The numbers 4 and six were chosen as the balls that would not be weighted, meaning they’d be more likely to be drawn.

Having gained access to the room where the machines and balls were held under lock and key courtesy of lottery official Edward Plevel, Perry was able to persuade a stagehand called Fred Luman to switch the balls for the weighted ones before and after the draw. When the drawing took place, it resulted in the numbers 6-6-6 coming out, meaning that the scam worked and the team behind it received a share of $3.5 million, or $10.9 million in today’s money.

The suspicions of the authorities and local bookmakers were raised when it was noticed that a large number of tickets had been bought with the eight possible combinations on them. The Maragos brothers had travelled around the area to buy tickets, including at a bar from which he called the announcer’s booth at the television studio. When questioned, it was confirmed that Perry had been part of the plan and also revealing the rest of the conspirators.

Eventually, Perry was convicted of criminal conspiracy, criminal mischief, theft by deception, surgery and rigging a public contest. He was sentenced to seven years in prison, with the Maragos brothers testifying against him. Ultimately, he spent two years in prison and another one at a halfway house before being released on parole. He died in April of 2003, never admitting to playing any part in the lottery scam.

Buying Tickets After the Draw

Somewhat unsurprisingly, he was found out and was severely punished by the Chinese authorities. He had attempted to avoid being caught by asking friends and neighbours to cash the winning tickets and then give him the money. Those attempts failed, however, and he was sentenced to life in prison as a result of his deception. Having owned three lottery stalls, the court also claimed all of his property.

In 2015, it came to light that a Security Director for the Multi-State Lottery Association had rigged one of the Random Number Generators used for the drawings of the Hot Lotto game. Eddie Raymond Tipton was convicted of perpetrating a fraud in October of that year, later confessing to rigging draws in a similar way in the likes of Wisconsin, Iowa, Colorado, Oklahoma and Kansas, involving his brother Tommy in the scheme.

The case involving Tipton was a complicated one, with the draw for $14.3 million having been made on the 29th of December 2010 and initially left unclaimed for around a year. At that point, attempts were made to claim the lottery ticket anonymously, which isn’t allowed by the Iowa Lottery and so was rejected accordingly. When an investigation was launched into the claim, video footage of Tipton buying a ticket was discovered.

This was problematic because lottery employees were not allowed to buy tickets, meaning that his doing so was an illegal act. Prior to the anonymous attempt to collect the ticket, an attempt had been made to claim it by a resident of Quebec City called Philip Johnson. His claim was turned down because he couldn’t provide enough details to prove that he’d bought the ticket and it was Johnson that called again claiming the ticket on behalf of an anonymous company.

Representatives from a law firm in Des Moines put forward a claim on the winning lottery less than two hours before the deadline to claim prizes was due to expire. The claim was signed on behalf of Hexham Investments and New York City-based attorney Crawford Shaw, but ‘Hexham’ was misspelt as ‘Hexam’ on the claim, leading to it being turned down again. When Shaw refused to identify the owners of the trust when he claimed again, it was again refused.

The surveillance football of Tipton buying the original ticket led to his arrest on charges of fraud and of attempting to illegally participate in the lottery, as well as using fraudulent means to try to claim the prize. When the trial began, prosecutors claimed that Tipton not only attempted to claim the ticket in a fraudulent manner but that he had been guilty of rigging the draw to match his ticket in the first place, using his position to allow him to do so.

Tipton reportedly used a USB flash drive to upload self-destructing malware onto the computer to rig the Random Number Generator to pick his numbers. Tipton denied any part in the fraud, but was found guilty on two counts on the 20th of July 2015. He was sentenced to ten years in prison, with further investigation alleging that he was also responsible for another three cases of rigging lotteries to allow people he knew to win.

A final twist in the tale came about in 2016 when the Iowa Lottery, as well as the Multi-State Lottery Association, were sued by someone who had won $6 million courtesy of a Hot Lotto draw several months after the original one that Tipton had rigged. He claimed that, because the MUSL had acknowledged that the draw had been rigged, the following draw should not have been rest to $1 million, which is what the lottery chose to do.

His claim was that he should have won $16 million rather than the $6 he actually did win. It was claimed that Dawson’s lawsuit was an ‘attempt to rewrite history’ and that there was no way of knowing what would have happened. On top of that, the jackpot from the 2010 draw was not claimed in the end and was instead distributed to the sixteen different states that participated in the lottery, meaning that Dawson failed to win his case.

Previous Post: « Why Are Bingo Sites Leaving Virtue Fusion & Where Are They Going?
Next Post: Who Are the Youngest Jockeys in Horse Racing? »