In the eyes of many, there is little difference between stock market investments and gambling. As a stock market investor about that, though, and you’d probably be laughed out of the room, such is the extent to which they consider what they do to be difficult skill that often takes years to master. There are links between the two things, of course, but they also differ in many ways. The interesting thing is that, in recent times at least, some of the apps used by investors have started to look more like gambling apps that we all use.

As we have almost all moved online and virtually everyone owns a smart phone, those responsible for the world of investing have tried to find ways to get the market to appeal to the average consumer. One of the chief ways in which this has been achieved has involved adding graphics and features to investment apps that make the experience of using them more exciting for all concerned. This works in numerous different ways, of course, including the fact that investors themselves also feel like they’re gambling a lot of the time.

Why Is Investing Different from Gambling? 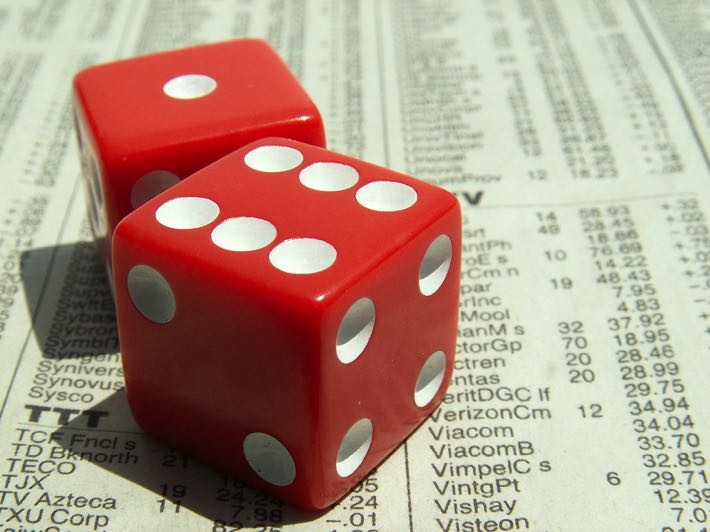 Before we spend too long looking at why it is that stock market investors might be being turned into gamblers by the gamification off the investment apps that they’re using, it is worth drawing a line underneath stock market investing that differentiates it from out and out gambling. The reason we need to do this is that there are some similarities between the two things. Both activities involve a form of risk as well as of choice, with investors risking their capital in the hope that they will earn money in the long-term.

In many ways, gambling is the same. You put your stake at risk, hoping that you’ll be able to win money in the long-run but knowing that there’s a chance that you’ll lose it all. The biggest difference is that there is a negative expected return on gambling, both on average and in the long-term. The flip side of that as far as investing is concerned is that that boasts a positive expected return in both the long-term sense and on average. This is largely because investors can mitigate their losses in numerous different ways that gamblers can’t.

Of course, a lot of this depends on how we define what it is that we’re talking about. When it comes to gambling, there is a difference between playing slot machines or sitting down at a roulette table and hoping that Lady Luck will shine on you when compared to playing blackjack or poker. The latter games give you choices to make and allow you to play in such a way that you can give yourself a better chance of winnings, whereas the former two options are ‘pure’ forms of gambling, in which you have absolutely no control.

Investing involves allocating funds or assets, such as stock, with the expectation that it will generate an income. The expectation that you will get a return is one of the core premises of investing, with risk and return going hand-in-hand. The reality for investors is that low risk will mean low expected returns, whilst higher returns usually require people to take higher risks. Traders will typically put between two and five percent of their capital at risk on any given trade, spreading their capital across assets to minimise losses.

How Trading Is Being ‘Gamified’

In 2021, only about 56% of Americans owned any stocks. As a result, companies that offered investment applications moved to add game-like features to their trading apps in the hope that it would encourage more people to take part in trading. This gamification involves the addition of features to apps that make the experience of the user more visually appealing, as well as making it more exciting and intuitive. It makes such apps different from the drab world of indexes and financial jargon that many associate with trading.

Those that are critical of such methods believe that they trivialise the experience, even going so far as to be manipulative and misleading. In the US, this led the Securities and Exchange Commission to issue a formal request from the public for comments on the matter, whilst the Financial Industry of Regulatory Authority has considered doing the same thing. The question for both bodies is whether or not regulation is necessary in order to protect people from the various practices that are involved in the world of trading.

As you might imagine, it isn’t easy to explain what gamification looks like in the world of trading. One of the most obvious things that has been introduced to trading applications is the use of reward animations. On an app from Robinhood, for example, confetti fell across the screen of users whenever a trade was made. This put the idea in the mind of the user that making trades was something to celebrate, regardless of whether or not the trade itself was actually a successful one. In reality, that is definitely not true.

When it comes to trading, the more trades that you make the more likely it is that you’re going to lose your money. Stock traders tend to lose more often than not, so people that don’t really know what it is that they are doing would be much better off being less active in terms of trade volume. Robinhood eventually removed the graphic from their app because of the number of complaints that they received about it, but they replaced the confetti that appeared previously with geometric patterns that floated across the screen, suggesting they didn’t really learn their lesson.

When Stocks Are Trending, They’re Given Prominence

Another gamification of investment apps comes in the form of trending stocks. Just as people that use social media are used to reading about the trends that are taking place during the day, so too did some apps inform users about the stocks that were trending at any given moment. A stock with a significant price swing would be displayed in this way, irrespective of whether or not the change in the stock’s price was a good thing or a bad thing. This resulted in the most volatile stocks being put front and centre, at the expense of what might be better options.

Investors that are easily influenced can be swayed by such stocks, in much the same way as video game players might decide to sign a player that features in the Top Ten Scorers list on a football game. The fact that an average 20-day return on the top stocks bought every day was -4.7% probably goes some way to explaining how badly designed such a feature is. Though Robinhood would doubtless claim that they were simply putting the information out there, it was done in such a way that it was likely to tempt the inexperienced.

The money that you use to invest is often at risk when you take part in any sort of trading. It is for this reason that the financial services industry is regularly about as highly as any industry can be. Providers owe customers a wealth of information, which you’ll no doubt be aware of if you’ve ever borrowed any money from your bank or used the services of a pay-day lender. When investor platforms are gamified, however, there is little room for such information to be displayed, making way instead for cool interfaces and funky graphics.

Given the fact that people rarely read terms and conditions properly in the first place, there is something dangerous about a financial application that neglects the chance to properly inform people of the risks that they’re taking. It is not dissimilar form the world of gambling, in which many of the terms and conditions are signed up to when you first open an account, but many of the important sections of small print are never flagged up as being worthy of a customer’s real attention. The links between the two activities can be seen there, therefore.

When it comes to a link between gambling and trading apps, few are as clear as the actions that are used in terms of lottery system incentives. Let us imagine a world in which your investment company of choice is trying to encourage more people to make trades. Rather than telling them about the sensible trades that they can make, which isn’t sexy enough for many, they fire out an email to everyone that is on their app, saying that ten lucky people that make an investment of £100 or more will be entered into a prize draw for £500,000.

The odds of actually winning the half a million are extremely small, but the encouragement to trade more actively is clear. This will be especially tempting to inexperienced new investors that are looking to make a fast buck. If you choose to buy or sell the stock that you’ve bought, you’ll incur a fee that the company benefits from, but they don’t flag that up as readily as the do the chance of winning £500,000. No wonder so many people are concerned about what is taking place on investor apps at the moment.

It is entirely possible that you’re reading all of this right now and wondering why it matters, or even whether it does matter in the first place. One of the key issues is the conflict of interest in play between the broker and the investor. In most instances, the most lucrative path for the investor is the least lucrative one for the broker, so the latter is unlikely to give impartial advice to the former. The more trades you make, the more likely it is that you’ll lose money, but the more money the broker will make taking a fee for each trade processed.

With that in mind, therefore, the gamification of trading that gives the impression that you should be trading all of the time works in the broker’s favour and against that of the investor. Even if the app that you use is a free trading platform, the chances are that you’ll still be in a position where a conflict of interest is at play. In virtually all instances, the larger the volume of the trade that you engage in, the more likely it is that you’ll lose money and the broker that you use will make it, making more and more with each trade made.

Appeals to a Younger Demographic

The biggest issue, of course, is that anything gamified is more likely to appeal to a younger demographic. The very nature of the word ‘gamification’ suggests that you’re making something more like a game and the majority of people that play games aren’t retirees. Instead, they’re people aged between 18 and 34 that might be tempted into spending money that they don’t have making investments that they don’t understand. Brokers are desperate to encourage such people to take part in trading because they’ll make money from them.

There are also things taken from sports, such as the ‘Predictive Analysis Tools’. These show users what their investments would look like under optimal conditions, rather than the likely outcome under realistic ones. As a result, punters will often be given the impression that the decisions that they’re making are sure to see them earn a lot of money, when, in reality, they’re more likely to lose money. To the customer, though, it all seems like one big game when the truth is that their money is very much on the line.

Previous Post: « Football Referee Bias: Do They Support a Team & Can They Bet on a Match?
Next Post: How Do Lottery Syndicates Work & Are They Legally Binding? »