Daub are one of the more mysterious and interesting brands in the bingo software industry. The company started life in 2001 setting up successful sites such as Wink Bingo and Posh Bingo, but after some promising early growth they decided to move on and eventually sold these sites to 888 Holdings in deals reported to be worth £60 million upwards. The company went quiet after this, going on a hiatus with little to no news of any games or new platforms.

These days, though, they are right back in the mix of things with some fantastic brands to their name including Kitty Bingo and SpinandWin Bingo. The company are currently based out of Alderney, Channel Islands, where they hold licenses with the UK Gambling Commission and the Alderney Gambling Commission of Control. 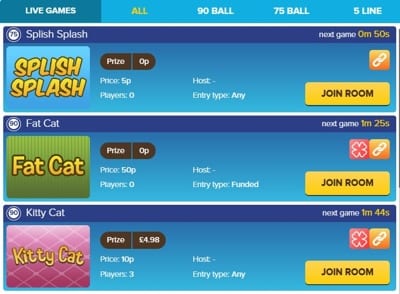 The package that you are going to get with Daub is fairly simple but still effective. They specialise in 75 and 90 ball bingo games, but over the years have come up with several ways to put a bit of a twist on these games that many of you will know and love. It’s these ‘twists’ that have set Daub apart from much of the competition, and if you have been playing for a short time their games are instantly recognisable – especially when hitting up sites such as Wink Bingo and Posh Bingo.

A great addition to any bingo portfolio is that of branded games, and Daub covers these in abundance. Its probably fair to say that the company’s most successful bingo game comes in the form of Harry Hill’s TV Burp, a UK TV program which one of their bingo rooms used to sponsor. The game comes with a great design and the bonus rounds display the same bonkers charm that made so many people fall in love with the TV show.

Games from Daub are of a very high standard across the board, and it’s clear to see that they have spent an awful lot of time tweaking and fine tuning them in order to really compete with some of the best in business. The Bingo room doesn’t come jam packed with games, but those that are on offer are of the highest quality, which in our opinion is significantly more important than rolling out hundreds of games just to look busy. 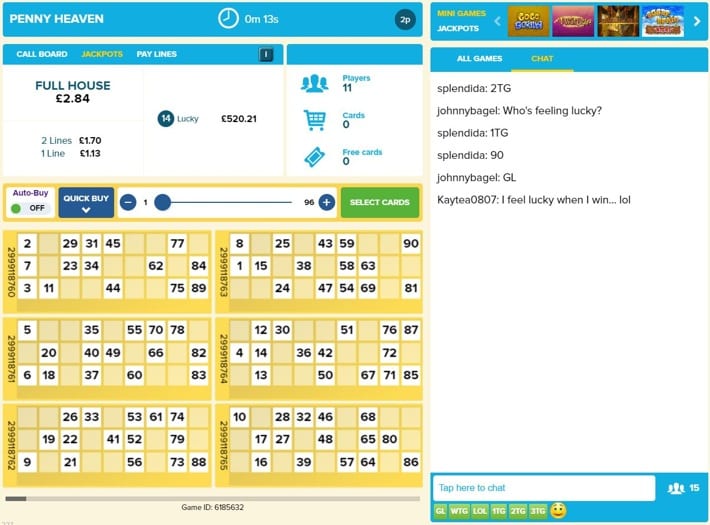 Whilst the company has had some downtime since the sale of some of their biggest assets, it’s clear to see that they have used that time wisely. One of their finest innovations has to be the link with the mobile sector, granting players the ability to play such a huge range of their games via mobile. All new bingo games that they release are on the HTML5 platform, which means that they are designed for both mobile and desktop use without the need for additional software; it requires no downloads and can be accessed instantly from just about any device.

The live chat feature that runs across the network means that you can be chatting with players from around the world, but also from different online bingo rooms. This makes for a much larger community and means that there will likely be players online at all times of the day – perfect for you night owls. 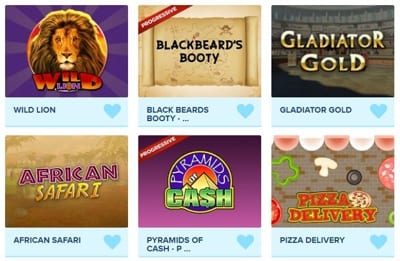 The side games section is one of the best we have seen; in fact, it might just be the best. They include a huge range of slots, card games, table games, scratch cards, and progressive jackpots, which you can play simultaneously with your bingo games.

This section actually took us by surprise, as it doesn’t seem like the site would embrace a huge catalogue of side games. We presume that they pull in games from another software provider for this, especially as they have always been so dedicated to bingo over everything else.

There are a number of jackpot games that you can play across the network. These games come in a few different variations, including 90 ball progressive, 75 ball progressive, lucky number, high cut, low cut, magic number, goody bag and mystery hours.

Each has its own little twist and the range of jackpots on offer will vary depending on what time of the day you play. They also include in-game jackpots, which are just jackpots that run up for a certain number of games within a certain bingo room, rather than across a whole network.

Daub have been about since 2001 and in that time they have created some of the most successful online bingo rooms in the industry. The sale of titles such as Posh Bingo and Wink Bingo to 888 Holdings in 2009 was an odd move at the time as they were just starting to find their feet with these brands, and they had high-end end sponsorship deals both online and on TV.

It wasn’t until 2012 when we saw Daub return to the market with the likes of Kitty Bingo and SpinandWin. Interestingly, it was around the same time that a company called Stride Gaming was founded. Stride Gaming were set up by a host of highly experienced players from within the online gaming industry and went about trying to create something of a ‘mega-brand’ if you will.

Sometime after 2012, the company acquired Daub Gaming and they are now used as a holding company for Daub. They currently have three wholly owned subsidiaries of their own in the form of SRG Services, Baldo Line, and QSB Limited.

Stride Gaming is a company that is moving forward quickly in the industry mainly by acquiring existing companies such as Daub, which was reflected by their share price which increased by as much as 50% from 2015-16 alone.