B-Livegaming has been about since 2009 and have managed to carve out a nice little niche in the live bingo gaming sector thanks to one very unique feature – the ability to play bingo and get your five minutes of fame at the same time. So long as you have a webcam, the way it works is simple; play bingo as normal, and when you win your camera goes live and everyone can see you celebrate.

But don’t worry, the shy and retiring among you will be pleased to hear that this is not compulsory, it’s entirely optional, but it does result in a boost to your prize money and grants the chance to win extra prizes in the shape of the ‘best live win moment’. It’s also a good bit of fun and makes the game feel more social than other online bingo sites can manage.

The company are based out of the Netherlands, but they work with a number of companies around Europe, with their two main clients being the original site, BingoCams, and a newer sister site, Bright Bingo. 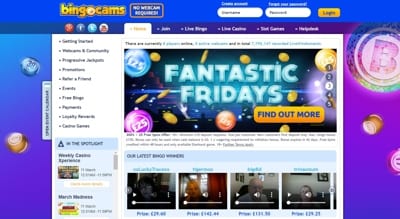 The games on offer are pretty basic and include both 75 ball and 90 ball variants. If the site were to function on these games alone then we think that they would really struggle, but each game comes with webcam capabilities making for a much more dynamic experience.

The company’s goal was to make their games more interactive and allow people to communicate with each other throughout their bingo time. The software that they have on offer enables them to host up to 3 players simultaneously via their webcams, which isn’t a huge amount, but any more than this would likely become utter chaos with people trying to talk over each other and having cross conversations.

Some of the bingo games include bonus games, but these can only be accessed when players are using their webcam.

The bonus games allow you to win more money for your efforts and all players can follow your progress during your broadcast – so you could pick up a few fans along the way! The bonuses on offer are generally dependent on which site you are playing at, but with BingoCams you are able to win both cash prizes and actual bonuses that have to be cleared within their respective bingo games.

Each game comes with a live chat host that is on offer to make sure that you are sticking to the forum rules, but also to make sure any queries that you have are answered quickly and efficiently. What’s great about this feature is that you don’t actually see the host until they called upon, which means that they don’t interfere with your games unless they are needed. They can see your broadcasts though, so don’t do anything you wouldn’t want them to see. 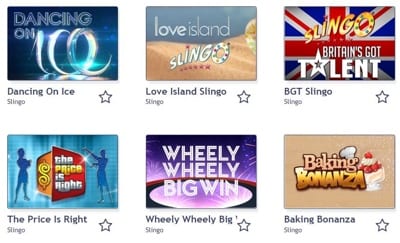 The site doesn’t include a great deal of side games at the moment, but we are hopeful that this will change in the not too distant future. What you can access at the minute is pretty limited, consisting of just a couple of slots and table games.

It’s worth noting that B-Livegaming is planning to introduce both Live Roulette and Live Blackjack games as soon as they can, and we have heard rumours that this will be incorporated into the bingo software, allowing you to jump between games. This will all depend on whether the provider that you are playing with supports the software, so nothing can be confirmed just yet.

The jackpot games on offer are all networked, which means that they run over several sites that host B-Livegaming products. Unfortunately, this isn’t a huge number of them and as a result the jackpot games can often feel underwhelming.

The company is owned by Dazzletag Entertainment and have been about since 2009, but it took them almost 3.5 years to finally bring their first product to market. Based out of The Netherlands, B-Livegaming has often been described as one of the most innovative bingo software providers in the world, and one of very few that offers live bingo platforms.

After the product was engineered, the company went about trying to find programs that were willing to take their product on. They found the perfect partner in the form of BingoCams.com and have gone on to form one of the most exciting bingo platforms in existence. In fact, the company claim to have the best retention rates and player lifetime values in the industry, which is absolutely staggering if true.

B-Livegaming has managed to pick up several awards over years, which really indicates how highly regarded they are by their peers. The Which Bingo Site of the Year has to be their most prestigious award to date, but they’ve also won several others for innovation and even one that is based outside of the gambling industry.

The company are highly thought of in the bingo sector these days and the success they continue to have comes as little surprise to most. The introduction of their roulette and blackjack games is highly anticipated, and we can’t wait to see where they are heading over the next couple of years.